JUNE 11, 2015 — Stubb’s welcomed “Sinner” singer Jeremy Loops last night, with openers Charlie Brand and Tahoma. While the hot Austin weather permeated throughout the club, glistening faces in the crowd, it certainly didn’t stop anyone from having a great time. 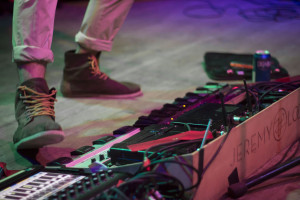 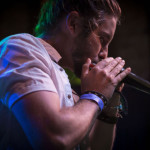 Hailing from Cape Town, South Africa, singer Jeremy Loops played a number of songs from his debut album, Trading Change. The crowd ate it up, and for an up-and-comer, Loops seems to have already amassed quite the loyal following. He pounded fists with nearly everyone in the front rows as he walked on stage, most of them young girls who cheered wildly as he took to the mic, and knew the words to all of his songs. No surprise, really. Loops is a debonair, funky singer with  a cool personality, and brings a fresh style to the stage. He’s listed folk legends Dylan and Woodie Guthrie as influences, but has a sound all his own — folk yes, but also hip-hop, with reggae undertones. It’s an interesting mix, and undoubtedly catchy. 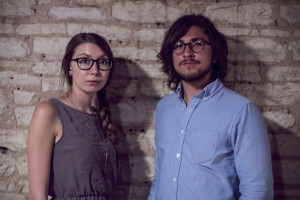 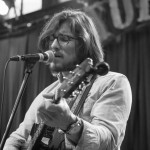 Openers Charlie Brand (of Miniature Tigers, a Brooklyn band) and Austin natives, Tahoma also didn’t disappoint. The venue was full right from the start. Tahoma started the evening off with a lighthearted setlist that kept the audience engaged.  An adorable trio led by singers Brandon Aguilar and Sarah Oermann, they’re currently playing locally in support of their digital album, Honest Mark. 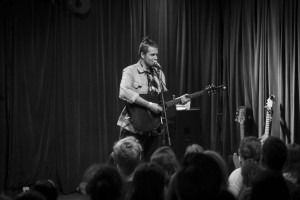 Charlie Brand… a funny man of sorts, played through a one man set, as he was without his band, and informed the audience of his nervousness being alone on stage.  His band, Miniature Tigers, was named “One of the 25 Best Bands on Myspace” in 2006 by Rolling Stone Magazine, and their most recent album was released last year, titled Cruel Runnings.

You can catch Jeremy Loops next in Dallas, June 12th, at The Door.
www.jeremyloops.com

Tahoma will next be playing College Station, TX on June 13th at the New Republic Brewing Taproom.
www.tahomaband.com

Charlie Brand will be back in New York on July 18th at Bowery Ballroom.
www.miniaturetigers.com

Photos and article by: Sarah Todd

I recently saw Jeremy Loops perform at Stubb’s in Austin, Texas. It was an incredible and astonishing show! From the first moment Jeremy stepped on stage, he gave off so much energy and excitement that intoxicated the crowd. It may be a one man show, but he collaborates with a few others, James Faull, who shreds the saxophone, bringing a powerful raw touch, Motheo Moleko, a rapper and essentially the hype man of the group that presents a hip-hop touch to the show, and Mr. Sakitumi, a super smooth bassist and drummer. These guys all do a great job getting the audience to reflect and connect from the movement and the equal amount of energy they release. Seeing them interact with each other on the stage through music casts a euphoria that changes the whole environment into more or less, an awesome dance party, never a dull moment.

Throughout the show Jeremy uses a “Loop pedal” which allows him to create layers of tunes that he creates live on stage. He plays numerous instruments, including harmonica and guitar. Sometime within the show, Jeremy lets the audience be apart of the show by giving them a line to sing or shout (however they want to say it) to then be recorded on the loop pedal. The use of the loop pedal gives the show a hand made and raw feel, unlike some artists who tend to have a dull and artificial impression to them. It’s cool to see how he uses this machine and his collaborators, in order to contribute to create rhythm and beats throughout the performance.

THE MUSIC is nothing like I’ve ever heard before. It’s a mixture of folk, hip-hop, reggae, a little jazz… just everything across the board. The base of his music is folk and Jeremy does an amazing job at revealing that through his music and the way he executes his interpretation of folk, truly makes him what he calls “a modern folk artist”. It’s completely original.

In the end it’s all about the music and Jeremy Loops does an outstanding job at delivering his music to the audience.

“I believe music, like all art, is a visual/audible representation of humanity. And humanity is community.” – JEREMY LOOPS