You are here
Home > FEATURED > The Hateful Eight – Trailer Review

After a spectacle debut of his first Western, Django Unchained, Quentin Tarantino is back out West with The Hateful Eight. However this time, with a group of people who are forced together after a blizzard traps them and who would turn on each other in a heartbeat. During the pre-production of this film there was major concern whether or not Tarantino would release it. After having the screenplay leaked online Tarantino debated whether or not to film the movie at all, but despite the setbacks he moved ahead to finish his eighth film.

The Hateful Eight follows bounty hunter, John “The Hangman” Ruth (Kurt Russell) as he takes fugitive Daisy “The Prisoner” Domergue (Jennifer Jason Leigh) to Red Rock to await her trail. However along the way to Red Rock, the two encounter another bounty hunter Major Marquis “The Bounty Hunter” Warren (Samuel L. Jackson) and Chris “The Sheriff” Mannix (Walton Goggins) and all four are forced to stay in the roadside stop Minnie’s Haberdashery after a blizzard threatens their journey. Whilst waiting out the storm the four wanderers meet the last four members of the Hateful Eight cast including: Bob “The Mexican” (Demian Bichir), Oswaldo “The Little Man” Mobray (Tim Roth), Joe “The Cow Puncher” Cage (Michael Madsen) and a former Confederate army general Sanford “Sandy” Smithers. 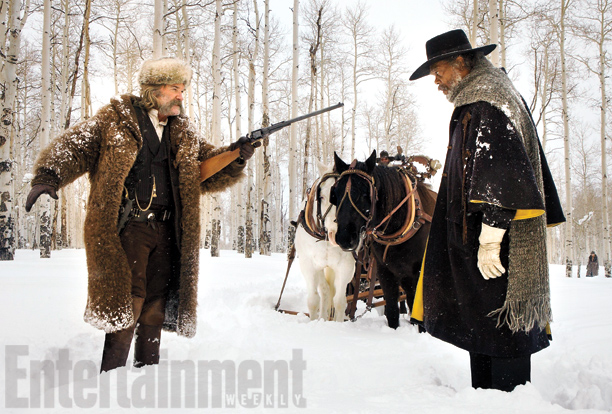 With recent hits and crowd pleasers such as Inglorious Bastards and Django Unchained, Taratino’s next film will surely live up to his name and everything that comes with it.