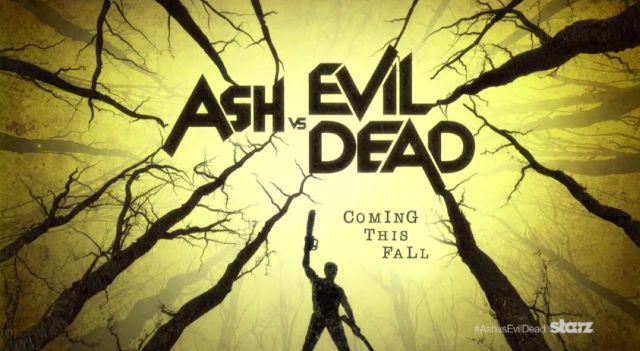 Good. Bad. He’s the guy with the gun.

[su_heading]A brief word about Evil Dead 2 and Army of Darkness followed by a preview of Ash vs The Evil Dead.[/su_heading]

The crisp air of morning. The beautiful fiery backdrop of changing leaves. The scent of burnt wood. The sight of daylight dying earlier with each passing day. All things that remind me that my favorite season of the year is upon us. The dawn of autumn means All Hallows Eve is soon to come. With Halloween comes lots of movies pertaining to my favorite genre. Just the thought of Freddy stalking his prey, the Halloween theme song or yelling crazily at one’s own severed hand is enough to put a smile on the face this old(ish) man. Of the 3 examples just given, I would like to focus on the latter because Halloween 2015 comes loaded with Deadite tricks and bloody treats. 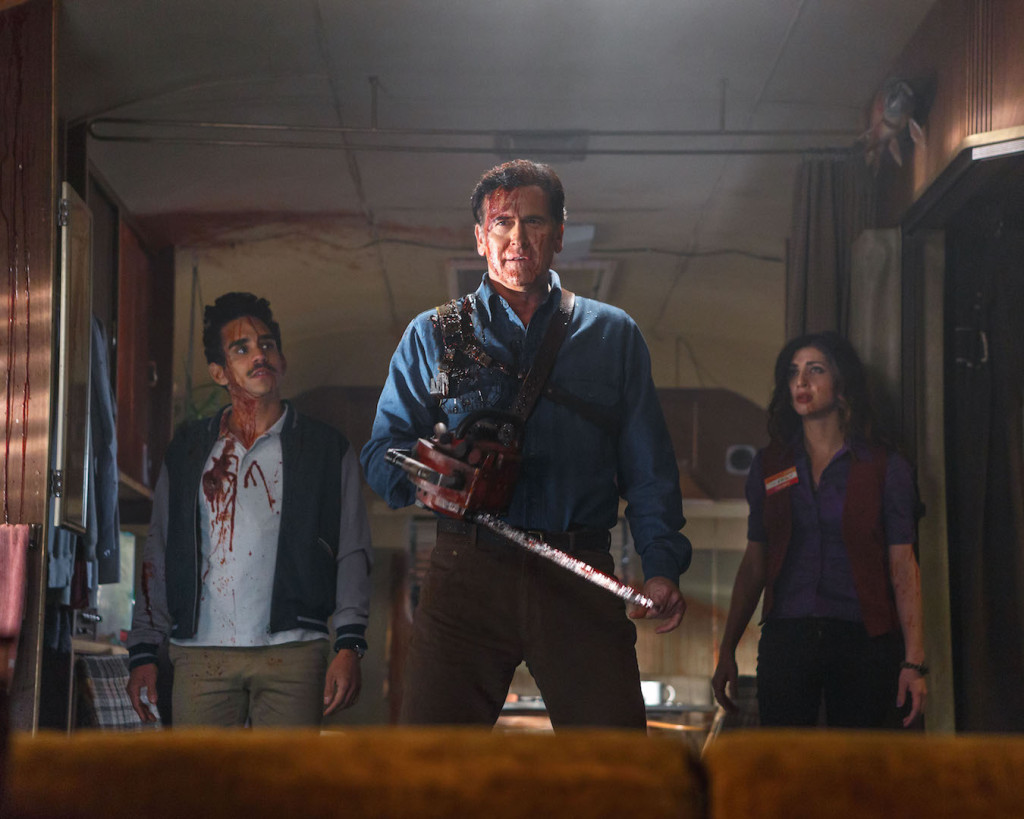 I was 10 years old in 1987 and obviously too young to see Evil Dead 2 when it came out in the theaters, but do you think my age stopped me from watching it on VHS at a friends house. Hell no! Having already experienced the genre through Nightmare on Elm Street, among others, I was really excited to see the movie that was being talked about as one of the bloodiest films ever made. What I didn’t expect was to fall in love with this flick so much that it actually changed a lot of who I was up to that point in my life.

I found that Evil Dead 2 had a different style than the normal slasher films I had already enjoyed. I laughed as much as i felt terror. It was a new feeling for me and I loved it! No longer was I a casual horror film watcher. I sought out any and all low budget horror flicks I could find (what i discovered is a discussion is for another time). Many of them have their merits but nothing was like Evil Dead 2 to me. Evil Dead 2 definitely cemented my love for horror movies and I am forever thankful for its existence.

When Army of Darkness released in 1992, I was only 15 but managed to sneak into the theater to watch the army of the dead try to till kill off my favorite anti hero, Ash (Bruce Campbell). From his incredible defeat of the pit monster to his classic lines like “gimme some sugar baby” or “this is my BOOMSTICK!” Ash did not fail to deliver. I could go on and on about the Evil Dead series and how much I love everything about it (including the recent remake/reboot, although that movie was straight horror without the dark humor of it predecessors) but instead, I want to discuss something I never thought would happen. Something that has been rumored for so long that it predates the Internet (as we know it at least), a sequel to Army of Darkness! It has unexpectedly (finally!) become a reality, but just not how we were expecting it.

Years after we last saw Ash Williams, the minds behind the Evil Dead franchise have decided rather than bring everyone’s favorite Deadite slayer back to the theaters, they are resurrecting him on the small screen with Starz new show, Ash vs The Evil Dead (premiering, of course, on Halloween 2015). This is more than I could have hoped for (but didn’t know I wanted). Instead of a two hour movie, we get at least five hours (ten half hour shows) of Evil Dead goodness in the first season.

Note: While writing this article, AvED was picked up for season 2 before the premiere episode even aired! 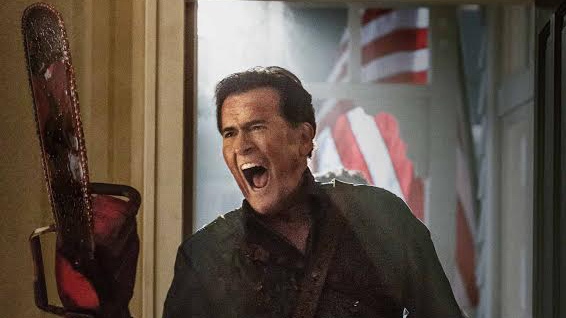 It’s been some 30 years (23 actual years since the last movie) since the conclusion of AOD and it seems not much has changed for Ash since then. Ash is still working in retail (albeit, no longer in the employ of S-Mart) and he is quite satisfied with his lot in life. Forever the loudmouthed braggart, Mr. Williams manages to release a Deadite plague on the world, while trying to impress some women no less, by reading a passage from the Necronomicon which was just sitting on a shelf in his mobile home. Only Ash would keep the Necronomicon on a shelf as if it was a copy of The Old Man and The Sea.

Having a propensity for killing Deadites, Ash picks up a couple of work buddies ,Pablo (Ray Santiago) and Kelly (Dana Delorenzo), and takes them under his wing (HA!). Ok, this is all stuff you can find in the official trailer from Starz, so let’s just talk about the feel of the show. To me, it looks like Sam Raimi and Co. are punching up the comedy for this show. A lot of horror that tries it’s hand at the comedy/horror combination fail or at most are moderately successful (I’m looking at you NOES),but the Evil Dead series only gets better because of it, in my opinion.

Campbell and Raimi have always seemed to know what will work and won’t when it comes to mixing the comedy and horror genres. Ash vs The Evil Dead looks to be fully embracing that strong point of the franchise and I couldn’t be happier! There are plenty of other options if you want straight gore or torture porn (no thanks!), so it’s a smart move to do what Evil Dead does best. Sam Raimi is directing the first episode and will continue to executive produce the entire first season. I am curious to see if any of his trademark directing style find its way into the inaugural episode (crash zooms or Bruce Campbell stuck to a rig with a camera filming his upper body while being driven through foliage). They are not necessary, but it would be a nice touch and would be a bit of nostalgia for the viewers. 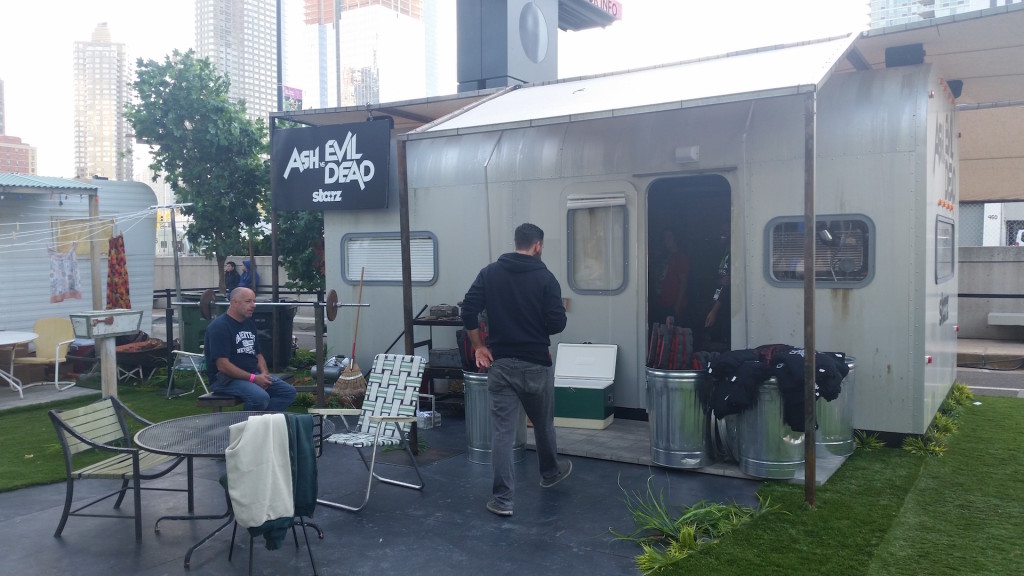 I was at NYCC this year and the new show was well represented with Ash’s mobile home available outside of the con for a quick tour and a scare. Unfortunately I couldn’t make it on the day the Ash vs Evil Dead panel was scheduled so I missed the surprise showing of the first episode. Thankfully we only have to wait a few days until the premiere. It’s been 23 years since I last saw Ash (save the stinger after the Reboot/Remake) and I honestly can say my love for the character and the series has only grown over time. I may be past the age of trick-or-treating or planning my costume for the year, but I will never lose the happiness I feel when Halloween rolls around and this year I get a bonus! Ashley Williams and his boomstick will be kicking Deadite ass once again! Hail to the King baby! 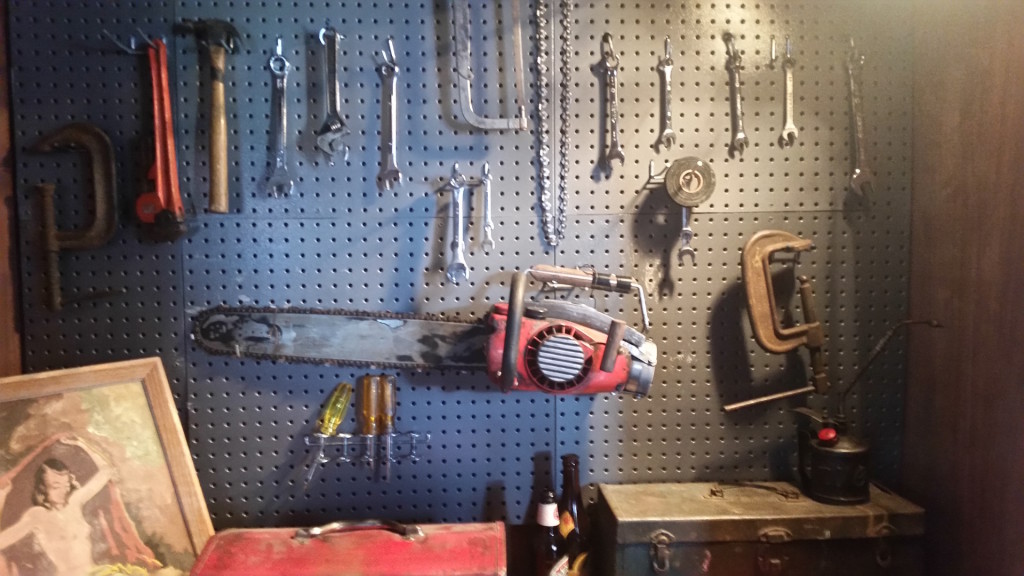 One thought on “ON TV: Ash vs. Evil Dead”