You are here
Home > MOVIES/TV > The X-Files To Return

I probably don’t have to explain what The X-Files is and why it’s exciting that this iconic franchise is returning for a six episode mini-series run on Fox but if I do then, frankly, I weep for this generation. But only because I care. Fortunately, there is plenty of time left to get acquainted (or reacquainted) with and fall for this groundbreaking science fiction horror conspiracist drama that shifted the pop culture landscape and inspired legions of fans, forever influencing the way these genres would be interpreted. No other show like it combined the macabre with the cerebral in ways that make the viewer question the boundaries of their imaginations and, further, question authority in every form from the government to the laws of physics to the nature of the universe. All things seem possible, however fascinating or horrifying.

Drawing inspiration from the greats, The Twilight Zone, Alfred Hitchcock Presents, and Kolchak: The Night Stalker among others The X-Files would have been just another above average genre program if not for something that noticeably develops over the course of the first few seasons: the dynamic and vital chemistry between Gillian Anderson and David Duchovny. When their professional relationship evolves into a codependent partnership that goes far beyond will they/won’t they, this show shines, finding humor and substance in the darkest places. It does have its misses, not every episode is a winner but when it hits it hits and you find the perfectly oiled machine of storytelling, characters, dialogue, all of it. Many of the best episodes stand alone as unique, instant classics of the television format but the show really finds brilliance when exploring the bigger arcs, when small peaks behind the curtain imply a larger and frightening conspiracy that dwarfs all other mysteries.

Anyone searching for their Duchovny fix after his unceremonious departure from the Files (that’s not really a thing) can indulge in the somewhat self-indulgent but often lovely Californication, currently on Netflix. As writer/alcoholic/kindred spirit Hank Moody, Duchovny is more than charming enough to carry a show that is often overwhelmed with T&A but well written and genuine when dealing with love and family. Gillian Anderson has been involved with a few things since but the standout to me is The Fall, a BBC crime drama that she absolutely blows the doors off of as a detective tracking down a serial killer. But as gifted as these two actors are and the trajectories their careers took, ultimately they came to inhabit the roles that made them famous. Some part of them became some part of their most familiar characters and vice versa, and just like the believer and the skeptic that made such a good show and two theatrical releases something really special they keep finding each other. 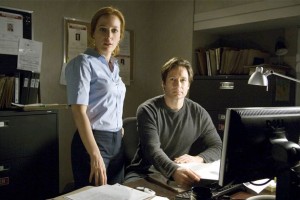 Mulder and Scully are back. Show creator Chris Carter is still adamant about the truth being out there, and if the first full length trailer for the return of The X-Files is any indication, the feel is back as well. Nothing else looks quite like this show and not just in the sense of cinematography. The shadowy figures meeting to share some cryptic knowledge that only raises more questions, the silhouetted man in a warehouse with spotlights shining in, the flashback to some post WWII military shenanigans, my eleven year old me is squealing with joy because this is what my family gathered around to watch on Sunday nights. Before the internet was a thing that didn’t require a house phone line or an AOL free trial disc we used to…(holy crap I’m old)….we used to have to wait until the next day to talk about an episode with friends. To their faces, it was exhausting.

So with the exception of this first full length trailer I’m going to avoid Internet Overexposure until this January, when the six new episodes premiere. I lost some of the magic overanalyzing Breaking Bad and True Detective episode by episode and I’m not doing that this time around. I strongly recommend doing the same by skipping the rampant blogotry that will break down the symbolism and mysteries week by week by some fanboy (or fangirl) hack. Someone who is going to put together an essential episode guide and has a Fox Mulder action figure on his desk. Unless, of course, that hack is me.

This is a no-brainer, starting from the beginning is the best way to see how far they have come. Production for multiple seasons was in no way a guaranteed thing when Carter and Co. started off and it’s fascinating seeing these relative unknowns explore their characters. The visuals and themes are there from the beginning, however. The beams of light out of a dark sky, the larger more terrifying mystery only hinted at. Every new answer only leading to more questions. I was hooked from here.

I get chills running down my arms just thinking about this episode. Mulder and Scully find their roles as believer and skeptic swapped and I don’t know what is more heartbreaking. Her desperate struggle with loss and search for meaning or his normally playful curiosity about the supernatural replaced with a kind of cynical contempt.

So this one will stay with you. I don’t recommend eating anything during this episode. That’s all I got, best of luck.

This may be one of my favorite episodes of any television show ever, it’s easily in my top ten. All elements of what make The X-Files so charming and haunting, so funny and morbid at the same time are here. A self-contained episode with a brilliant performance from Peter Boyle, this is one to sit up late watching and think about before falling asleep. Not to be missed.

Another no-brainer, this one is not on Chris Carter’s essential list but is a fan favorite. It’s also the first time I can truly recall as a child laughing uncontrollably at something on TV (the Mulder Squeal).

When it comes to the really disturbing or terrifying episodes I like to leave as much to the imagination as possible. Suffice it to say it’s fun to watch this one with the family.

Another episode that explores The X-Files sense of humor, this one was written by Breaking Bad creator Vince Gilligan and features, let’s call it an unconventional story about vampires recalled from Mulder and Scully’s differing perspectives. This one is also more of a lightweight fan favorite than a must watch.

Also written by Gilligan, this is the episode that sold AMC on Bryan Cranston as Walter White. So. I really don’t know what else I need to say.

Apparently a favorite of Chris Carter and the cast, this one stars John Hawkes one of the more underrated character actors working today. He would later be nominated for an Oscar for his role in the Jennifer Lawrence film/meth addled prequel to The Hunger Games called Winter’s Bone.

I love baseball and I make no apologies for it. This episode is written and directed by Duchovny who is a fan as well (of the Yankees, unfortunately) and is a personal favorite of mine. In fact, I think I’m watching this one tonight…

This list is in no way comprehensive and mostly contains the more popular recommended episodes but these are almost entirely standalone entries. For the longer story arcs I recommend googling a list of mythology eps, there’s plenty of time to catch up. Apparently, the revival will be a combination of both and with any luck will be a new beginning for the series. This kind of optimism is uncharacteristic of me but it’s there nonetheless. After all, the fact that there are six new episodes of this series at all is a miracle, these kinds of second chances are hard to come by. So I’m going to enjoy it for all it’s worth and hope for the best. Now I better get offline before someone calls my house and interrupts my connection to the Information Superhighwa-