PHOENIX – A sold-out crowd at the Orpheum Theatre gave Chris Cornell a standing ovation before he struck his first guitar chord Wednesday night. Opening the evening’s festivities was Philadelphia native, Hemming, the stage name of singer/guitarist Candice Martello. Her 30 minute-set was made up of original songs, mostly from her 2015 self-titled debut album. Her beautiful and powerful voice, coupled with wonderfully crafted songs, was received very well by the audience, proven by the line of people waiting to buy her album in the lobby after her performance. Her performance of “Vitamins” was especially moving, telling the audience there was a video for the song of her “walking through a forest, dressed in black.” She closed her short but sweet set with “Some of My Friends,” which she introduced by saying “this one’s not sad, it’s actually kind of happy…well, the lyrics are still kind of sad, but it’s in a major key.” The audience laughed, and she left them cheering and wanting more.

After the break, Cornell took the stage and shook hands with the front row as he moved to the mic, surrounded by several acoustic guitars, a small amp, and a few other items that alluded to some surprises to come. The show was billed as a solo Chris Cornell show, though he did have a cellist Brian Gibson join him for about a third of the 29 songs performed throughout the night. This concert was originally scheduled to be the tour opener in September, but due to a booking on the Tonight Show, was postponed, making it one of the final nights.

Cornell’s incredible two and a half hour set included songs spanning his entire career as a solo artist, as well as his roles in Soundgarden, Audioslave and Temple of the Dog, and several covers of the songs he grew up listening to. He also threw in some interesting stories along the way. Cornell had intended for his first solo album, 1998’s Euphoria Morning, to be called Euphoria Mourning, but due to confusion during a radio interview before its release, he decided to change the spelling, and therefore meaning, of the title. He told the audience that he had regretted that decision, and as the album was being released on vinyl this month, took the chance to change it back for all future pressings. He continued to praise the sound of vinyl records, and then took the cover off a vintage turntable on the stage, put on a record of the piano part of “When I’m Down,” dropped the needle and, without any other instrument in hand, sung the haunting vocals to the beautifully scratchy sound of the record. 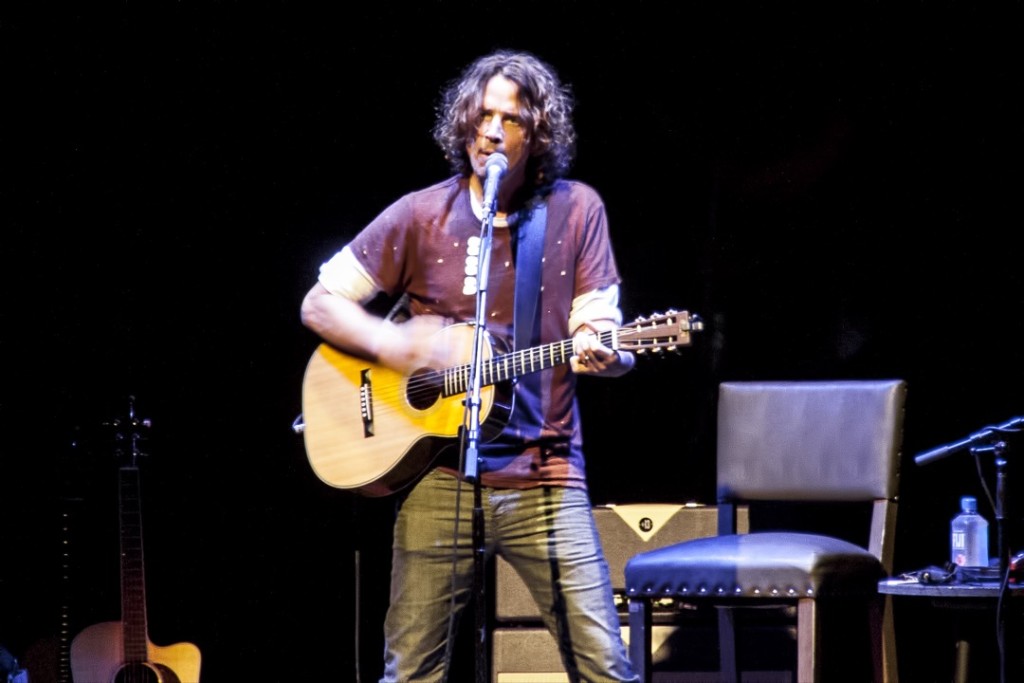 After opening with two of his own songs (“Before We Disappear” from his latest release, Higher Truth and “Can’t Change Me” from Euphoria Mourning), he played back to back covers, starting with an upbeat and unexpected take on the Bee Gees’ “To Love Somebody,” followed by his reworked version of Bob Dylan’s “The Times They Are A Changin’,” which he calls “The Times They Are A Changin’ Back.” Though his version has not been officially released, there are several popular videos of it on the internet from this tour. During that song, Cornell used a headset mic with a harmonica attached, which also allowed him to move about the stage more. Later, when he used the headset again he thanked Neil Young for showing him that it is possible to use a headset mic without looking like Sammy Hagar from the 1980s.

Gibson joined Cornell with a mandolin, instead of his cello, for “Nearly Forgot My Broken Heart,” the first single from Higher Truth, which is his highest charting solo single to date, hitting #3 on Billboard’s U.S. Mainstream Rock chart. Gibson stayed on stage, going back to the cello, for a beautiful and haunting performance of Soundgarden’s 1994 hit “Fell On Black Days.” Cornell performed a few other Soundgarden songs throughout the night. His performance of “Rusty Cage” was closer to Johnny Cash’s version than it was to the original, “Black Hole Sun” was one of the best uses of Gibson’s cello playing all night, and “Blow Up the Outside World” ended with Cornell looping his guitar and voice to a gripping climax before a few of the calmest songs of the night. One of those songs was another of the more surprising parts of the night, a cover of the Prince song “Nothing Compares 2 U,” made popular in the early 90s by Sinead O’ Connor. It also has not been released, but was performed during a SiriusXM set at the beginning of the tour in September. 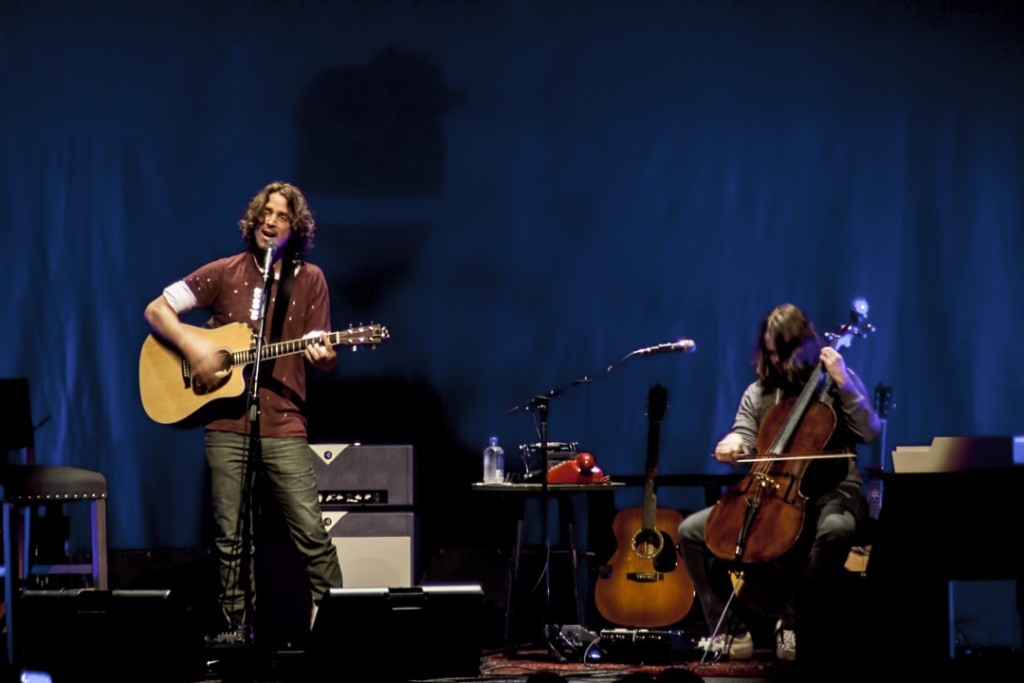 In 1990, Chris Cornell put together a “supergroup” of Seattle grunge musicians called Temple of the Dog, as a tribute Andrew Wood, the late vocalist of Mother Love Bone. Tonight, he performed “Call Me a Dog,” “Say Hello 2 Heaven,” “Wooden Jesus” and “Hunger Strike” from their only album, the self-titled 1992 release. These songs got some of the biggest reactions from the crowd of the evening. He also performed “River of Deceit” by another Seattle supergroup with some of the same members that he was not originally involved with, called Mad Season. That band released one album in 1995, with vocalist Layne Staley of Alice In Chains, who passed away in 2002. Earlier this year, Mad Season’s Mike McCready (better known as guitarist of Pearl Jam) put together a one-time reunion show with the Seattle Symphony, and asked Cornell to fill in for Staley.

Cornell Also Performed three songs from his time as the vocalist of Audioslave, “Dandelion,” “Doesn’t Remind Me,” and “I Am the Highway.” Audioslave consisted of Chris and the guitarist, bassist and drummer of Rage Against the Machine. The band formed in 2001 and released three albums before disbanding in 2007. Before “I Am the Highway,” Cornell asked a young audience member if it was their first concert, which kicked off his story of his first concert – Paul McCartney and Wings at the Kingdome in Seattle, with a record-setting crowd. He then said he preferred to see shows in theatres more like this one.

Cornell, now 51 years old, was an amazing and captivating performer throughout the night. His voice has matured, in a very good way, since early days with Soundgarden. He can still hit the incredibly high notes, but has developed a fuller sounding voice than the pure scream he was known for in the 90s. One of the most jaw-dropping points of the night was a cover of The Beatles’ “A Day In the Life,” featuring an incredible build-up of guitar, cello and echo effects that filled the theatre until it couldn’t take one more decibel of sound, then one final chord, a “thank you, goodnight” and a cheering crowd that jumped to their feet.

Back on stage for a three song encore, Chris played a cover of Bob Dylan’s “I Threw It All Away,” and two songs from his latest album. The first was a song called “Josephine,” which he told the audience he began writing for his wife several years ago, before they were married, and finally finished and recorded this year. He closed the evening with “Higher Truth,” the title track of the new album and namesake of the tour. He seized one more opportunity to fill the room with looped guitar, and echoing vocals, said one final “goodnight” and left the stage with his final chords still resonating.