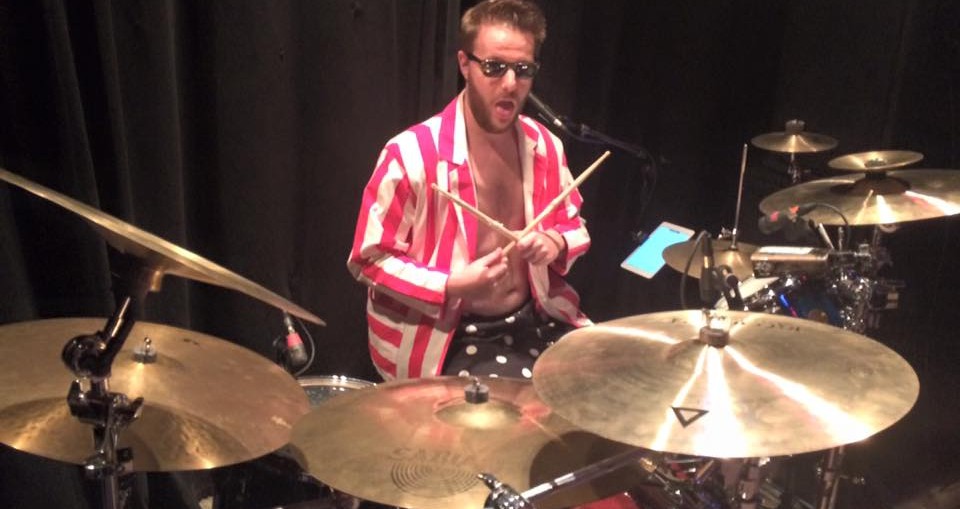 We recently had an opportunity to chat with Zack Burwick, drummer for the band Pink Talking Fish. Currently on tour throughout the East Coast, we look forward to catching them at their upcoming show on February 27th at the historic NorVa venue in Norfolk, Virginia. Check out all their tour dates at http://www.pinktalkingfish.com/

MonkeyGoose: Pink Talking Fish is a hybrid tribute band that fuses together material from Pink Floyd, Talking Heads, and Phish. Half the fun must be diving deep into the individual bands’ catalogues of music and creating your set lists. Do you choose themes for your inspiration or are you guided by the musical structure?

Zack Burwick: Creating the setlists is a huge part of what makes a group like this so much fun. As a fan of these bands in the first place, like Phish for example, everyone knows how exciting it is to check out the setlists of the band every night or in the past and just imagine how everything comes together. It’s thrilling to see how they start or end a 1st set. Do they do a standard opener of high energy like Punch You in the Eye to set the pace? Or do they bust out something completely rare to tell everyone, “Ready or not, here we come!”. With this group we get to take 3 of our favorite bands from different decades with completely different styles and twist and turn our way through setlists we could only dream of seeing in a way. We like to dabble with the theme concepts only when they are called for. Special occasions if you will. Last Halloween we played 2 nights near our home base of Boston at the Middle East Club. The first night we did an Animals theme to go along with our concept of playing the album Animals by Pink Floyd. All songs that night were animal themed one way or another. We got to play musical transitions like “Dog (PF)>The Dogs(Phish)>Dogs” or “Guyute(Phish)>Pigs(PF)>Guyute(Phish)”. Also just great time to premier playing the track “Animals” by the Talking Heads. I guess you could say that’s the best of both worlds with the theme concept and the musical transitions. I know with Eric Gould as our band leader and the rest of us, our brains are constantly pondering all the songs we know and can learn and the ways they can be interwoven with the rest.

MonkeyGoose: I recently attended a show by a local Virginia band (DEJA) that based a performance on Pink Floyd’s The Wall, the entire movie soundtrack played by the band while the movie was shown on a big screen behind them. Have you ever done a whole show based on a single album, or a merging of two?

Zack Burwick: We often like to bring certain albums to light and base a show around them. With these 3 bands, It’s hard to ignore the brilliant masterpieces that are right under your nose. I’d like to think everyone out there can remember the first time they heard Dark Side of the Moon. We’ve performed Dark Side before a few times all while interweaving the songs of the other bands in between. Of course part of the fun of playing these classic albums is trying to do them as much justice as you can. This often means, getting a little help from your friends. I’d like to tell you I can sing the female vocals on “Great Gig in the Sky” but there’s no way that’s ever happening. We get to collaborate with some of our great musician friends out there sometimes with these concepts. These ideas are always on the table for us. Recently we’ve also done this with Phish’s concept of “Gamehenge” or “The Man Who Stepped Into Yesterday”. We already have thoughts on what we’re going to be doing in the future, that’s for sure.

MonkeyGoose: If you had to choose three OTHER bands to base a tribute band upon, what would they be?

Zack Burwick: Oh, what a fantastic question. Do you go with what makes the greatest name? Do you go with your favorite bands? Nailing both is the name of the game! Decisions, decisions. The other great thing is that you’d probably get different bands with each person in this group. I’d maybe start “Nine Inch Green Ween” (Nine Inch Nails, Al Green and Ween). Or maybe “David’s Vulfy Tears…..Collins” (David Bowie, Vulfpeck, Tears for Fears with a dash of Phil Collins). I mean, what could possibly go wrong with either of these bands, right?

MonkeyGoose: So far, what has been your best performance memory for Pink Talking Fish?

Zack Burwick: We’ve been so busy recently and there’s been a lot of shows out there. There’s a few that always stick out in my mind. Our first performance at the Wanee Music Festival in Live Oak, FL. Absolutely breath taking place to see music and have an amazing time. Our first time in 2014, we had a slot around noon on Saturday. We were new to the festival and that area. Playing early in the day. We had zero expectations of what would happen. I was still taking in having a trailer with our name on it, right next to Umphrey’s McGee, standing next to Butch Trucks side stage, meeting John Popper and telling him I loved his role in Kingpin all while surrounded by weeping willow trees. Anyways, when we first started playing it was around noon, I’d expect a lot of people to still be sleeping or getting their bearings together. Song by song, as we kept playing, more and more people showed up until it just became filled. I had never played for more people in such a beautiful place in my life. The other that really stuck out to me was a boat cruise in Burlington, VT last summer. We got the honor of playing on a ferry floating through Lake Champlain. I’m partial to Vermont. I can’t help it. Surrounded by awesome people and playing music by your favorite bands all while the suns setting and shining off the water. You got the Adirondacks in the back. Just take me back there!

MonkeyGoose: Do you have any festivals on tap for fans this year?

Zack Burwick: Yes we sure do! We’re honored to be coming back to some favorites and playing some for the first time. We’re extremely excited to be playing the Aura Music & Arts Festival within the next 2 weeks. We’ll be playing 3 nights at the Paradise Music & Arts Festival at Lake Snowden in Albany, OH. We get to play at the Disc Jam Music Festival which is a perfect combination of disc golf and music. Disc golf rules by the way. We also have 2 nights at Jerry Jam in Bath, NH. We’re truly fortunate to be able to play such fun music, with such great people, for such great people at all these venues. There’s always more to come. We absolutely love it. It’s an honor to play with such talented musicians. Eric Gould on bass, Dave Brunyak on guitar and Richard James on keys. All extremely talented and kind people.

One thought on “Interview with Zack Burwick of PINK TALKING FISH”