You are here
Home > FEATURED > ON TV: X-FILES Season 10 Review

I wanted to believe…

Mulder and Scully, while not originally household names due to the X-Files niche following at the start of the show in the early 90’s, eventually became TV royalty. I was an early adopter, so to speak. In a time before DVR, it was difficult to always be available to watch a first run show but I did my best. Over the years I consumed every piece of visual media pertaining to the X-Files (including one good and one not-so-good movie as well as comic books). So, having been a fan for years, needless to say, I was really looking forward to this six episode revival. Was this going to be a sort of mini series (one story line) or a true to form (truncated) season. It turns out we got the later, and I’m a little unsure how I feel about it. I suppose I better figure that out quick, but enough about my internal struggle, on to the show review!

There IS a main thread throughout this season though. It starts and ends with a massive (read: most diabolical plan of all time) conspiracy involving alien and human DNA mixing at the highest level of government. The two episodes that deal directly with this arc are titled “My Struggle” and “My Struggle 2”. Mulder and Scully are pulled deep into the mysterious world of controversial internet talk show host Tad O’Malley. He apparently knows more than your typical loud mouth braggart and wants Mulder and Scully to help him prove it. While I found this story line to be somewhat interesting, the show had no way of giving it it proper due with this being a six episode revival and all. I really wanted to know more about this conspiracy but I highly doubt all will be revealed in time (see the end of the article to understand why I say that)

There was also another season spanning issue of Mulder and Scully’s abandoned/given-up-for-adoption child William. The ex-couple show remorse for giving up their child and feel they should make an attempt to contact him. Again, it is a great idea to delve into this subject, but without the time to deal with said issue all we ended up with is another loose end. This is the main problem I have with Season 10 of the X-Files. I really do believe there were some good stories introduced here but feel like everything became rushed do to time constraints.

What really worked were the two monster of the week episodes titled “Home Again” and “Mulder and Scully Meet the Were-Monster”. Being that this a season review and not an individual episode review, I’ll talk about the later because it was more fun to watch (and now, to talk about). “M&S Meet the Were-Monster” is a great example of what I loved about the X-Files from the beginning. The series, while bounding in and out of really heady topics, always found time for some fun.

Thankfully the “fun” episode of the new season did not disappoint. It plays on the prototypical “bitten and then transformed into a monster” trope. Most of the episode is spent chasing after a monster that Mulder has a small encounter with after talking to someone who was supposedly attacked by it. It turns out that this monster, some sort of “Creature from the Black Lagoon” looking thing, is actually a “creature” in his native form but transforms into a human after being bit by a man. The conversation between the Were-Monster and Mulder pertaining to his new found urges as a human to be gainfully employed and a weird need to own a pet are hilarious! In my humble opinion, this episode completely justified the revival. 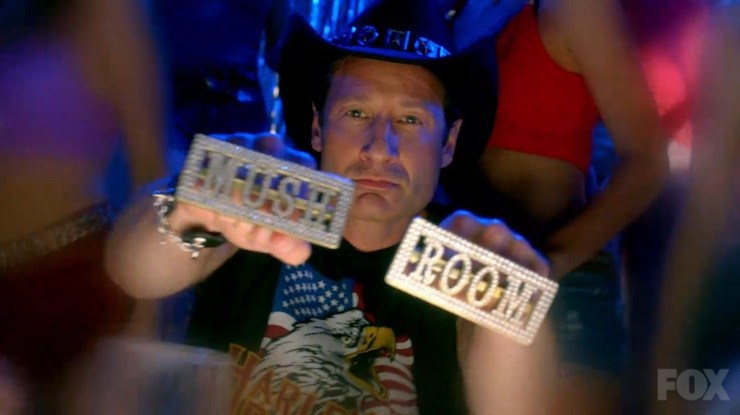 The penultimate episode of X-Files Season 10 was probably my least favorite of the bunch. That being said, the episode titled “Babylon” gave us one of the craziest scenes ever to be part of an X-Files show. It is a long, winding trip brought on by a psychedelic mushroom placebo (yes, a placebo). While I really didn’t buy into the trying to speak to a human vegetable through hallucinogens angle in this episode, it did give us this wonderfully silly scene chock-full of awesome vignettes and a couple of cameos (the Lone Gunmen was my favorite!).

The season ends in a massive cliff hanger, but due to the words during the opening credits (This Is The End replaced the traditional The Truth Is Out There), it leads me to think that this is truly THE END and we will not find out what happens next. I hope that this is not the case. While all was not perfect with the newest season of the X-Files, there was enough here to whet my appetite for more.

I would be remiss not to mention a few things that made me scratch my head with X-Files Season 10.

I will leave you with one last thing. The notorious Smoking Man made an impact for sure. Yes, he was part of the overarching conspiracy (as we all figured he would be) but the biggest impact by far was his disgusting face… behold! 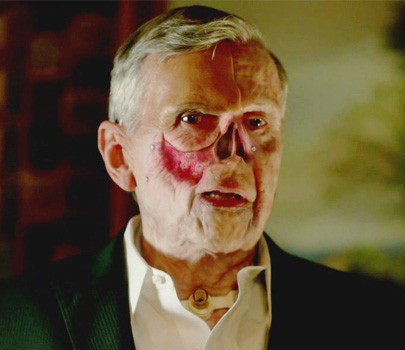 The X-Files Season 10 certainly introduced a decent amount of new storylines as well as an absolutely stellar monster of the week episode but the fact that there were only six episodes in total really hold it back from being a classic event.

One thought on “ON TV: X-FILES Season 10 Review”