Over the past few years, it’s (unfortunately) become pretty easy to notice that Blizzard has been struggling to a degree after their buyout by game publisher Activision in 2008. They aren’t necessarily in financial trouble, as the company could easily make its living off the money that Starcraft 2 and Hearthstone generates, but the fact that millions of users are leaving World of Warcraft in droves, alongside the dreadful Diablo 3 launch… many became fearful that the once great developers have lost their magic touch.

Overwatch would disagree with this however, as Blizzard’s latest game, as well as their first new IP in over fifteen years, has already proven to be an outstanding return to form, providing one of the most polished and entertaining FPS in years and rejuvenating the class based genre. 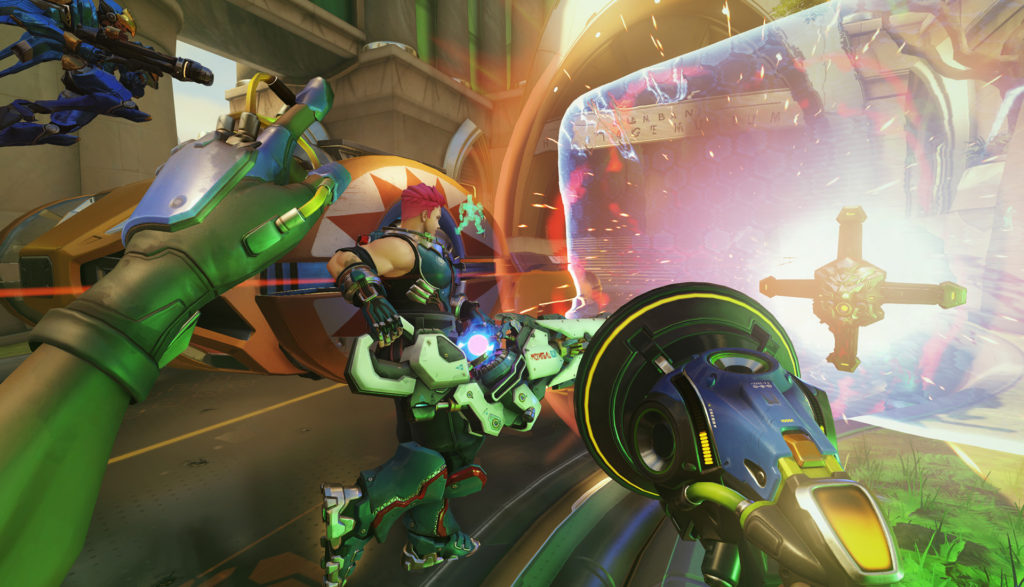 Upon first impressions, Overwatch doesn’t look all that special when compared to any old team-based shooter, especially to Valve’s Team Fortress 2, the current juggernaut of the genre. Much like Team Fortress, you have your medics, offense, tank, and defense characters that vie to take control or defend a point on the game map. Even the internet infamous “hat simulator” aspect that Valve introduced into their game appears in Overwatch, allowing players to pay money to earn extra costumes and cosmetics to change their favorite character’s look.

While these comparisons are certainly valid, to label Overwatch as a simple Team Fortress clone would be doing it an extreme disservice. For example, while the current 21 characters are separated by class, they all play wildly differently. In the support/medic class, you can play as Mercy, an angelic character who can use her staff to restore health or give an attack bonus. She can also quickly glide over to any friendly player within her sight — a great tactic for when you need to cover ground quickly to complete an objective. If that doesn’t tickle your fancy, you can also choose Lucio, a Rastafarian DJ who uses his roller-skates to quickly dodge incoming fire and uses his speaker gun to both heal allies and knock back enemies with some dubstep beats. And that’s just the tip of the iceberg when it comes to the wide variety of playable characters in Overwatch. Overflowing with personality and charm, each hero has a function that can suit any play style, whether you are more of a casual or a hardcore player, allowing for anyone to easily jump in and contribute something to their team. 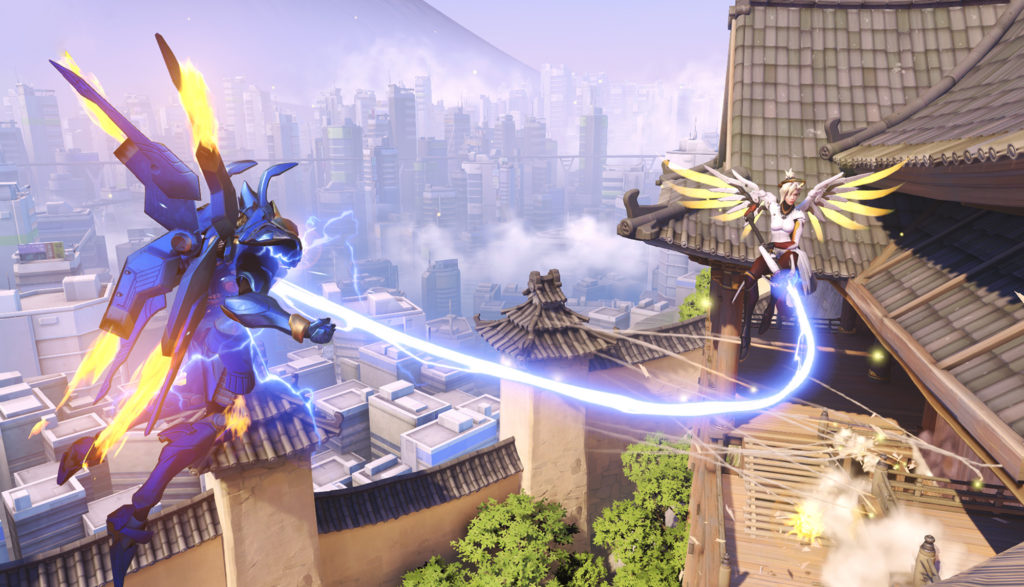 With all these diverse characters running amok each match, the end result might sound more confusing and chaotic than it would be fun, but Blizzard thought ahead and implemented many features that heavily encourage teamwork amongst you and your teammates. For example, one of the most frustrating things that can happen during a heated FPS match is to have someone take one of your kills, and therefore the majority of the points, leaving you with a measly assist. Overwatch, on the other hand, smartly doles out points to everyone who contributed in the kill depending on how much damage they caused, leading to much less animosity between teammates.

When picking your characters before a match, the game will also notify you if you have too many tank characters or not enough medics on your team, which is a subtle, yet surprisingly useful feature. While not forceful, it encourages players to experiment a little bit and try out a new role that your team might be missing.  The supportive characters who usually work behind the scenes also finally get some recognition through the MVP feature. Implemented at the end of each round, the game allows players from both teams to anonymously vote for the player of the match based on how much health they restored or damage they dealt. While this doesn’t provide an experience bonus or the like, it’s nice to get some appreciation from your teammates every now and again for constantly keeping them in the fight. 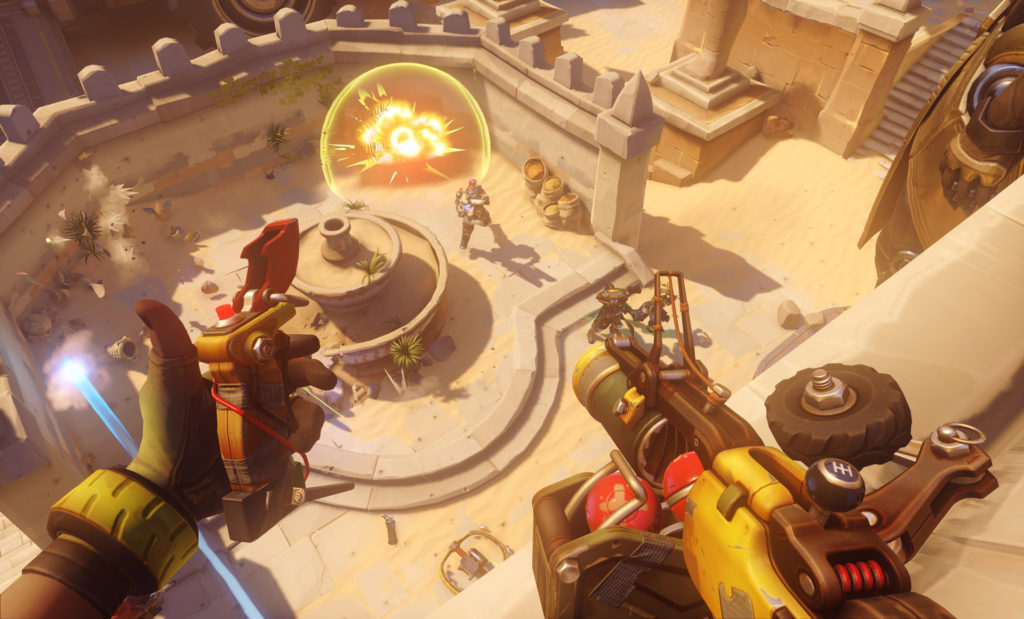 However, despite the beta and final game being surprisingly balanced and polished, there are a few nitpicks that hopefully will be fixed in the future. There are a few characters (looking at you Bastion and Hanzo) that have character specific abilities that, while able to be countered, are still a little too overpowered. Despite giving some love  to the support characters in the voting feature, the “play of the match” feature at this point unfortunately only gives praise to those who get a massive kill streak, which is near impossible for some characters, especially in the support class that consists of healers. The distance at where you respawn after death is also a bit annoying, as while it is certainly for balancing reasons, it can often take a character with no speed boost or teleportation ability  a good 20 seconds to get back in the fight, which, while not sounding particularly bad, can be the difference between winning or losing  a match.

The issue of pricing has become a much debated aspect of Overwatch as well, with the PC version costing $40 while those on the Playstation 4 and Xbox One have to shell out an additional $20, for a game that has only twelve maps and four modes. For most, this will mostly just be personal preference in what and how much you are willing to spend on multiplayer only games like Overwatch, but like many others, I see it being well worth the purchase for how many hours I’ll get out of it. If you are on the fence though, Blizzard has promised that all additional characters, maps, and modes will be free to all players, and considering the great support they have given their previous games, Overwatch should have a fantastic lifespan.

While not quite THE perfect multiplayer shooter just yet, Overwatch has become the closest to achieve that bragging right, being one of the most creative, polished, and just plain fun FPS to hit the market in the longest time. With additional content and fixes along the way through, Overwatch will no doubt achieve that precious title within the year. Blizzard has once again changed the game, and shooters will never be the same for quite some time, and I couldn’t be any happier.