PORTLAND, OR– With the hundred year old ballroom floor of the infamous Crystal Ballroom rolling like waves under a sold out crowd’s feet, 90’s Alt Rock inspired band Bear Hands rushed out to the stage (drinks firmly in hand). Val Loper, bass extraordinaire, thanking the crowd for “coming out tonight.” About a week ago I had the pleasure of sitting down to have a little chat with Val himself, getting all the juicy details on their current album, secret Portland hangouts, and epic plans for the future… 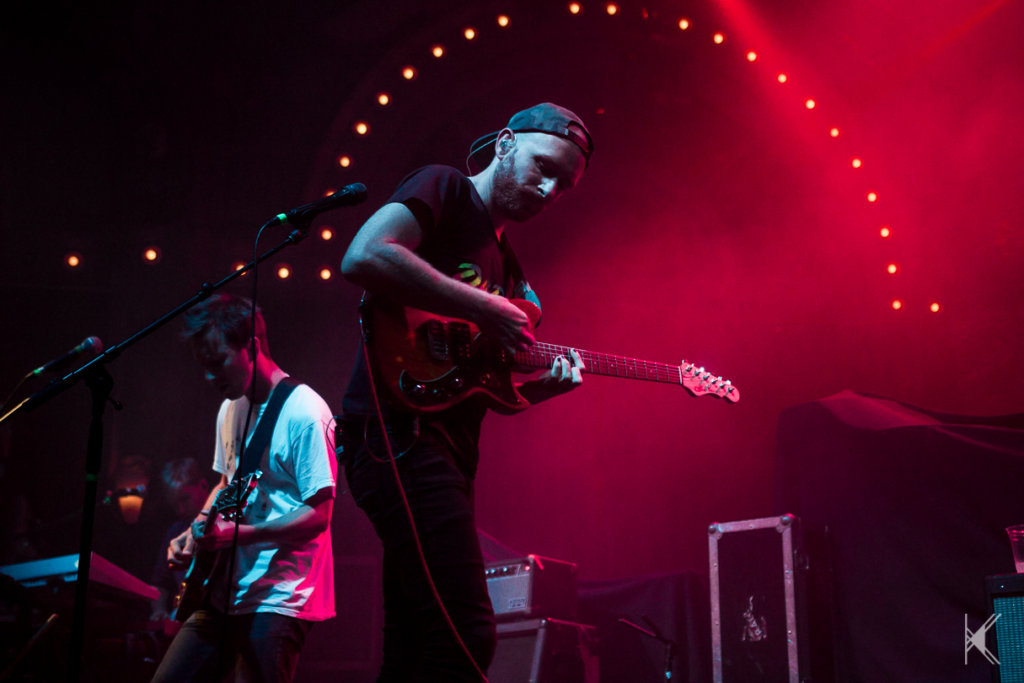 MG: “What’s the concept behind the title of your new album “You’ll Pay For This?”

VAL: “…It’s like a double entendre. It was a joke between Dylan and Ted. We played on Conan two years ago, and we wanted to do something funny when we were on the show, and then they just thought it would be funny at the end to look right into the camera and go ‘You’ll pay for this!’ So it became a joke in the band, we just never forgot about it. So when it came time to brainstorm a title, it just seemed like the obvious choice.”

As I saw Bear Hands live, I witnessed the amount of passion these guys exude. While performing their hit single “2am” off of their newest record You’ll Pay For This, I chuckled as I was reminded of what Val mentioned about the meaning behind the song, “…We spent a lot of time on the road, and when we got back things had changed, people had moved on, and we didn’t like to go out as much. It’s just– transitioning from being young and wanting to stay out 5 days a week until 4am, to going out maybe one night a week and thinking watching Netflix on the couch is way more exciting.”

MG: “Did you guys have a favorite song to write/record?”

VAL: “I personally really like the song Marathon Man. Specifically the bass part.”

I then sarcastically said something extremely sarcastic along the lines of “Well of course, the bassist loves the bass.”

VAL: “It’s kind of intricate but at the same time it also plays itself for me. I had a really nice time recording that song. Most of the album was fun to record, we were pretty well rehearsed so it went really smoothly.” 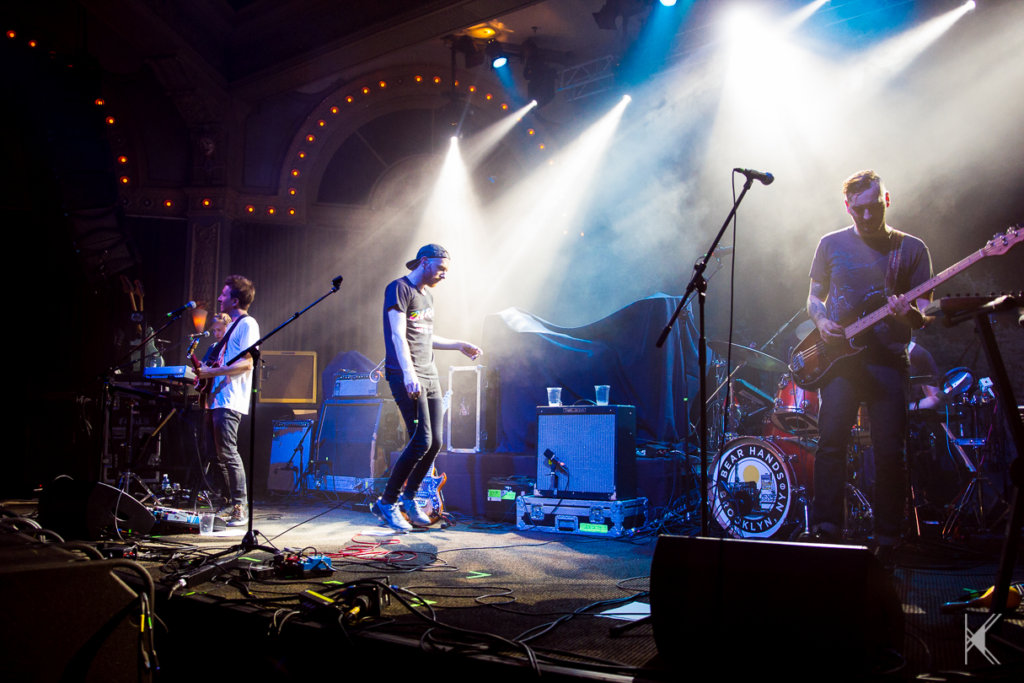 Like I mentioned before, Bear Hands definitely gives off a raw 90’s alternative vibe. It’s obvious from the first moment you hear their unique sound. Val commenting that they were “Influenced by a lot of 90’s left of center radio bands, because we feel like we exist on the radio as more of a left of center band.” Also taking me back to his early days as a musician saying he and the guys “wanted to kinda dig into some of those weirder bands we listened to on the radio growing up. Soul Coughing was a huge inspiration to us. Early Beck, Cornershop, ‘Brim Full of Asha on the 45’ that song specifically was brought up many times.”

Being that Bear Hands were to grace the Portland stage just a few days after we spoke, I had to ask about their last experience in my beautiful city, as well as any secret band hangout spots we’re all dying to know about. Val beginning with a chuckle, “We’ve been to Portland many many times, it’s always great. There’s lots of really good food.”

He then hesitantly laughs, entertaining the idea of answering the rest of the question, “We tend to go to the strip clubs in Portland… Just because it’s part of the culture there. We’re not really ‘strip club people’, but there’s no huge intimidating security guards, and the girls are actually nice, I don’t know, it’s fun, it’s just a novelty for us. I don’t think I’ve ever been to a strip club in another city. That’s just usually where we end up after a Portland show.” 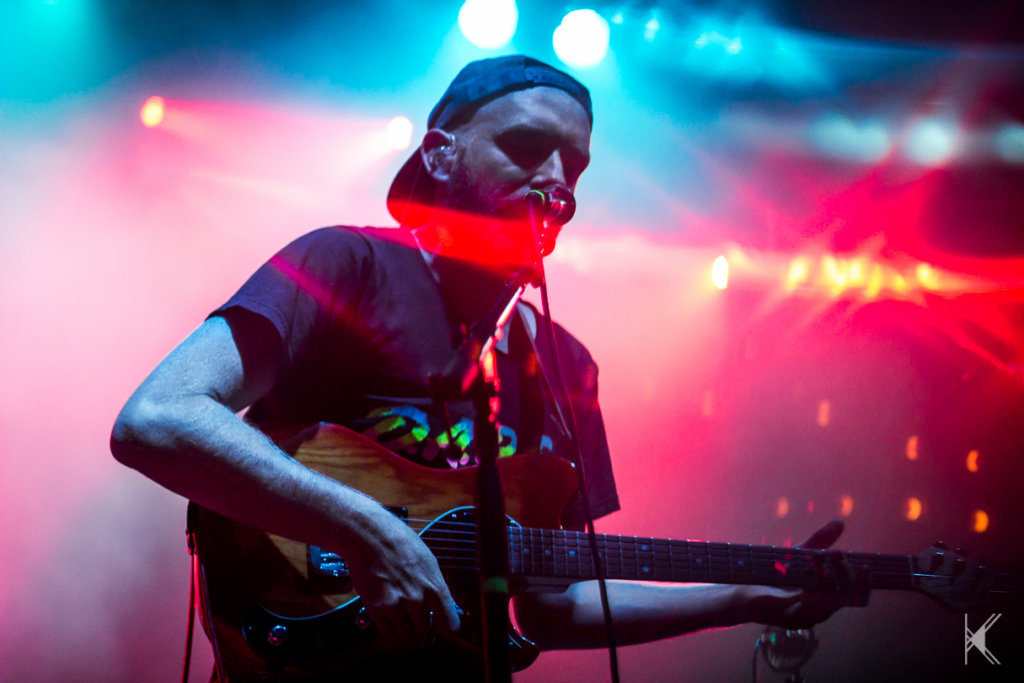 Ending our surprisingly delightful chat with a few fan questions from Twitter:

Kayla (@ConcertFLOTUS): Do you guys prank each other on tour?”

VAL: “Occasionally, on the last tour we liked to Ice each other.”

For those of you who don’t know what “Icing” is, it’s basically an awful drinking game where a player hides a bottle of Smirnoff Ice for another person to come across. The person who accidentally finds the Ice bottle first, must drop down to one knee and chug the entire bottle or else they owe everyone around them a bottle of Ice.

VAL (CONT.): “I got iced on stage by our sound guy, so I had to pound a Smirnoff Ice in front of 5,000 people before our show, and that sucked pretty bad. But for the most part we just leave each other alone. We’re boring.”

Ending his sentence in a self deprecating snicker.

VAL:  “Well I’ve said Marathon Man before. But I love playing ‘Boss’ now too. It has a really rocky beginning when playing it live. On this last tour we’ve really gotten that one together, now since we’re playing it well it’s been pretty fun.”

Bear Hands will be touring with fellow openers Kiev, and headliners FOALS until the end of November (specific dates located below).