Photos and Article By: Megan Niger

Friday night was no average night in Hartford, Connecticut. Rock enthusiasts crowded the downtown area, backing up the highway for nearly a mile. Mobs of people swarmed the entrance to the theatre and the box office stayed extremely busy well into the first two acts. I’ve been to nearly a dozen shows at this venue in my day, but never had I seen it as packed as it was for this show.

Headlining the nation-wide California Summer tour is the famous rock trio, Blink-182. Openers included DJ Spider, All Time Low and A Day To Remember. All in all, this was a real package deal for rock fans in the 860 area.

DJ Spider started the night off with some remixes to warm up the crowd. Shortly thereafter, All Time Low took the stage as the crowd continued to grow. Their setlist included favorites like, “Dear Maria, Count Me In,” and “Missing You”. 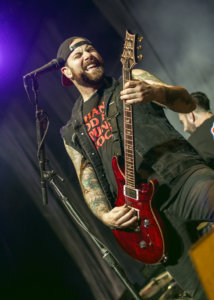 Next up was the five member group, A Day To Remember. Verging more on the metal side of rock, this set was nothing less than loud. The standing members occupied the stage well, circulating constantly and energizing the crowd to get up and move as well. As I finished photographing their set and walked back out of the pavilion area, I could see that almost everyone was standing and in some form or another, head banging along to the beat. 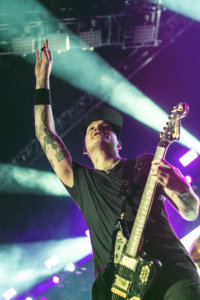 Finally after almost two and a half hours of the show starting, the long awaited trio took the stage behind a black curtain that shielded them completely from the audience. By this point, there was not a bare spot in the pit, pavilion or the lawn; there were people evenly dispersed everywhere. The curtain drops to reveal the word, “FUCK,” in large, fiery font behind the guys as they begin the song, “Feeling This”. Throughout their set, they played well known tracks like, “I Miss You” and “First Date”. Recent hit, “Bored To Death” was also included, promoting their newly released album California. The night finished off strong with an encore ending with the 1997 teen angst hit, “Dammit”. Even the people that only came for the tailgating knew every word to that song.

Megan Niger
Megan is currently studying photography at the University of Connecticut. When she isn’t binge watching Netflix shows or crying over The 1975, she spends her free time with her friends, family and dogs. She hopes to pursue a career in fine art, music and portrait photography.
http://www.meganniger.com