You are here
Home > FEATURED > GEARS OF WAR 4 – REVIEW

“We’re back, everyone,” says a reporter to the player upon starting up Gears of War 4’s singleplayer campaign. Is it a tad on the nose? Absolutely, but this isn’t exactly the most subtle game franchise here, so — despite the cheesiness — it’s kind of fitting. With the series being barren of a new entry (besides last year’s remake of Gears 1) for about three years at this point, fans have been dying for the series to tackle the Xbox One, as well as new developer The Coalition to take up the high standards that series founder Epic Games established with the third entry.

Lucky for everyone, The Coalition is made up of fans and programmers of the previous games in the series, and while that doesn’t always work out as well as it sounds on paper (::glares at 343 Studios::), it is at least a solid start, which is exactly what they give us here in Gears of War 4. The Coalition successfully moves the series forward with a great first entry, despite using what was previously established by Epic Games as a creative crutch at times.

Taking place twenty five years after Gears of War 3, the forth entry begins with a quick run through of the series as both a refresher for fans and a Spark Notes guide before they get thrown back into action. Following JD Fenix, the son of series protagonist Marcus Fenix, the story picks up with him and his three friends, Del and Kait as they seek to keep their small village town alive and kicking. While the Locust may have been eliminated, the COG military have become the new villains, establishing a totalitarian government run by Minister Jinn and her robotic DeeBee army. These new robotic enemies provide much of the fodder during the earlier battles, and while it is initially nifty to shoot off each individual limb, it just isn’t the same as being able to saw a Locust in two, and gets kind of dull after a while. 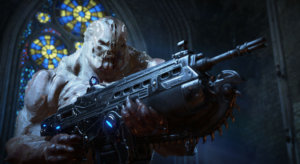 Thankfully this doesn’t go on for too long, as we are eventually introduced to the true bad guys of the narrative through The Swarm, which really kicks the campaign into high gear. Looking like strange orange glowing mutant monsters, these hive-mind linked creatures are surprisingly varied and can quickly are able to get the jump on you quicker than you can imagine. After this new threat trashes their village, as well as snatching Kait’s mother, JD is forced to ask his father for assistance in tackling this menace before they finish off the already small remnants of humanity.

Like the other Gears games, the story likely won’t wow anyone, but the dialogue and character interactions easily make up for it. Having a good bit of banter that is legitimately funny, The Coalition makes all the characters both new and old immediately likable, so while the narrative might not be riveting, you can’t help but root for JD and his crew. Gears 4 also introduces Windstorms, gigantic electric formations that result in some truly gorgeous set pieces throughout the story. The heavy winds and lightning blow away and explode the cover for both you and your enemies, and even greatly affect the trajectory of some weapons, forcing you to frequently change up your playstyle on a dime. 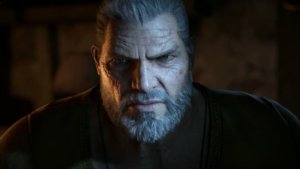 Despite this lowered expectation of the plot, that doesn’t justify a piss poor excuse for an ending that Gears 4 offers. While I won’t spoil things for those who haven’t played it yet, basically imagine watching a movie that ends right as it hits the 2/3rds mark, essentially right when the climax would happen, and you wouldn’t be too far off. The only purpose this would have is to try and get you to be first in line to buy the next game to see what happens next, which if true, is a really bad move on The Coalition’s part, as it really left me feeling sour after an otherwise enjoyable campaign. 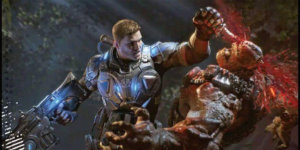 Like the other entries in the Gears series, the campaign is only one part in a jam packed package though, and thankfully they don’t disappoint. While making a few small fixes to the overall gameplay—for instance, you can now shoot away some cover and perform melee takedowns from cover—everything is essentially exactly as it was in Gears of War 3. All of the typical team deathmatch and capture the flag modes are back here, as well as a few great new additions. For example, Arms Race takes a page from Call of Duty and has you automatically switching weapons after a certain amount of kills with it, while my personal favorite, Dodgeball, has defeated teammates and enemies being “tagged” back in after one of their team members gets a kill, which can lead to some hilariously tense fun.

However, if you are like me, the main mode that will be getting the most attention here is the newly revamped Horde 3.0. Despite being endlessly repayable and entertaining before, The Coalition has managed to make an already rock solid mode into easily one of the best co-op experiences of all time. While the introduction of classes (engineer, soldier, scout, heavy, and sniper) might initially sound like a turn off for some, it works pretty well, all things considered. In fact, I found that working in a team where everyone has a specific role to work much better than I would have thought, and made me get a good bit more enjoyment out of an already fantastic mode. The ability to build walls and turrets anywhere you want is also a very welcome change, as being restricted to a limited area in Gears 3 often became too restricting. 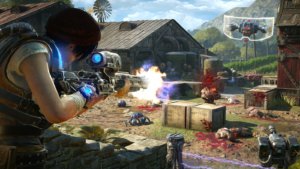 In the end, The Coalition didn’t touch the Gears formula up much at all for Gears of War 4, but as evidenced by the final product, it didn’t really need to be changed up a whole lot in the first place. Even if the campaign left you salty in the end, Gears 4 offers so much on the multiplayer front that it would be hard to still stay mad after a good twenty hours in the addicting Horde mode. While they might not be able to keep the formula from becoming stale for the fifth entry, for now Gears of War 4 is undeniably a Gears of War game, and that’s all any fan of the series could ever want.