Brooklyn NY- Once again returning to perhaps last known bastion of real rock and roll in NYC, the unmarked and dimly lit Saint Vitus,  familiarly adorned with a plethora of tongue and cheek satanic iconography once again prepared for a typical Saturday night. 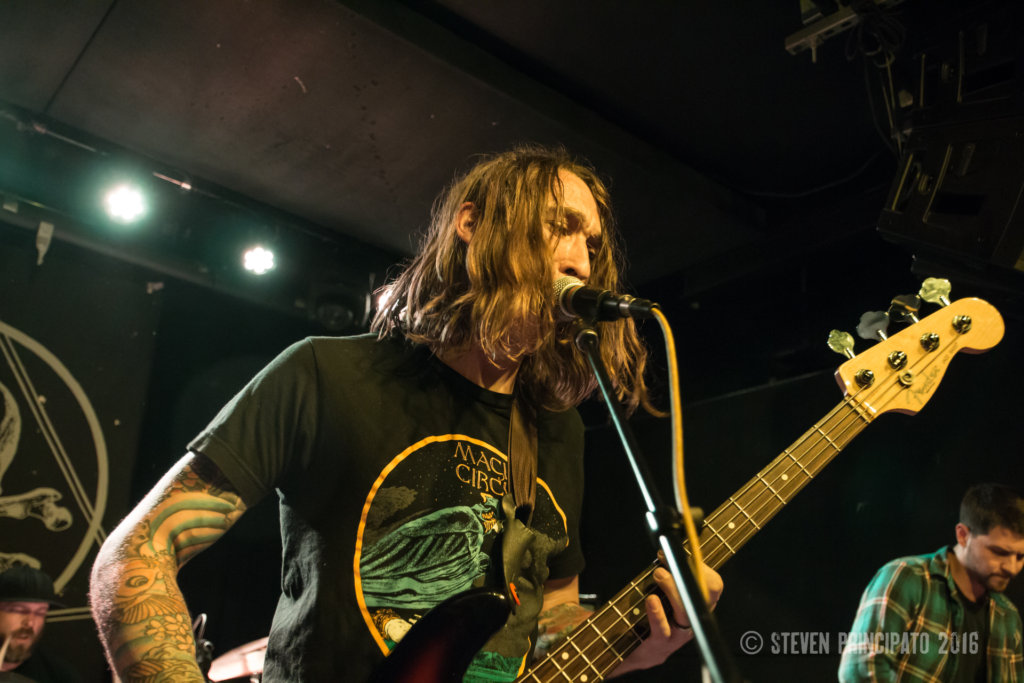 Opening the show was Summoner. This Boston Based quartet  struck me as a bit“Rush” like, only minus the Canada. Perhaps it was the high registered Bassist/vocalist singing style that brought the Canadian prog icons to mind.  However, as the set drew on I found myself promptly schooled in Summoner’s unique and stoner-rock friendly sound of pseudo-progressive riffing. Accomplishing a impressive draw as the opening act, Summoner effectively warmed up the rapidly growing crowd within the dark and claustrophobic confines of Saint Vitus for a very promising night of music, however not even the unique riff summoning expertise of the opening act could prepare anyone lacking  in eclectic musical tastes for the next band. 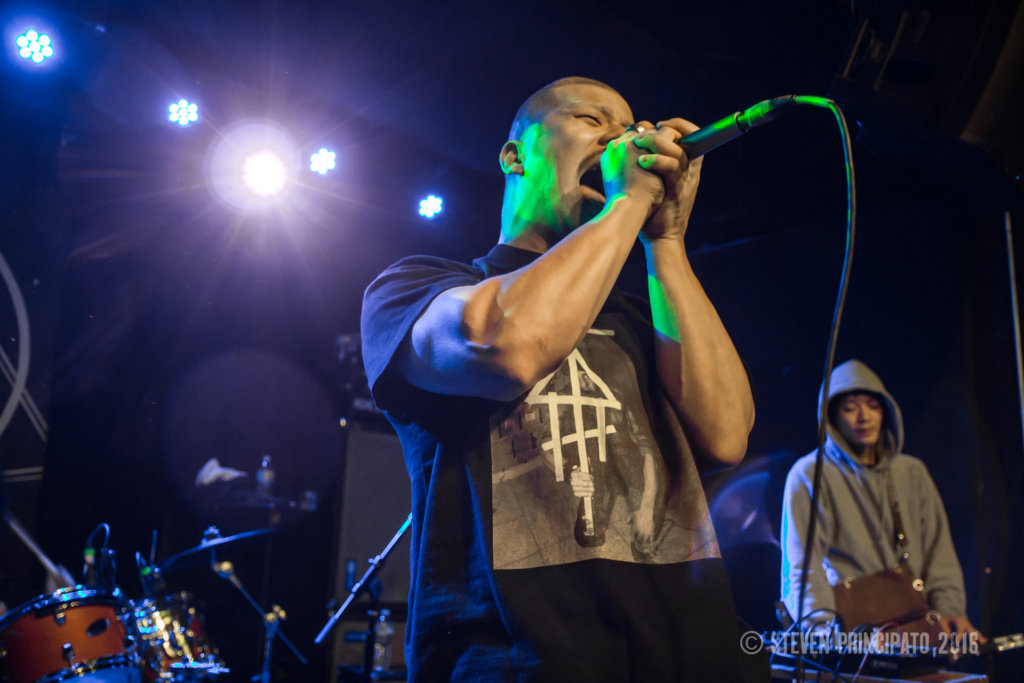 In the tradition of being something completely different, Endon, coming here all the way from Tokyo and keeping that honored tradition that we find  and so greatly value in the Japanese interpretation of art – that being an experience that you won’t forget anytime soon. In my many musical travels I have encountered many a Japanese act under the the influence of the nihilistic grind-core persuasion, but never one with the ferocity that Endon unleashed upon tonight’s audience. Without Introduction or a any significant break in the action, Endon battered the crowd with a synthesis of extreme guitar riff terror, drum blasts of immeasurable time signature, tormented vocal shrieks, and the anti-harmonic dissonance of two more completely made up instruments of unknown origin.  Despite the extremely experimental and anomalous general nature of their music, at no point did they fail to capture the roaring approval of the now huddled crush-fest before them. To the ears of the close-minded or musically inexperienced, Endon might be dismissed as mere chaotic cacophony, however to the gold plated ears of the competent musical aficionado Endon is pure genius. 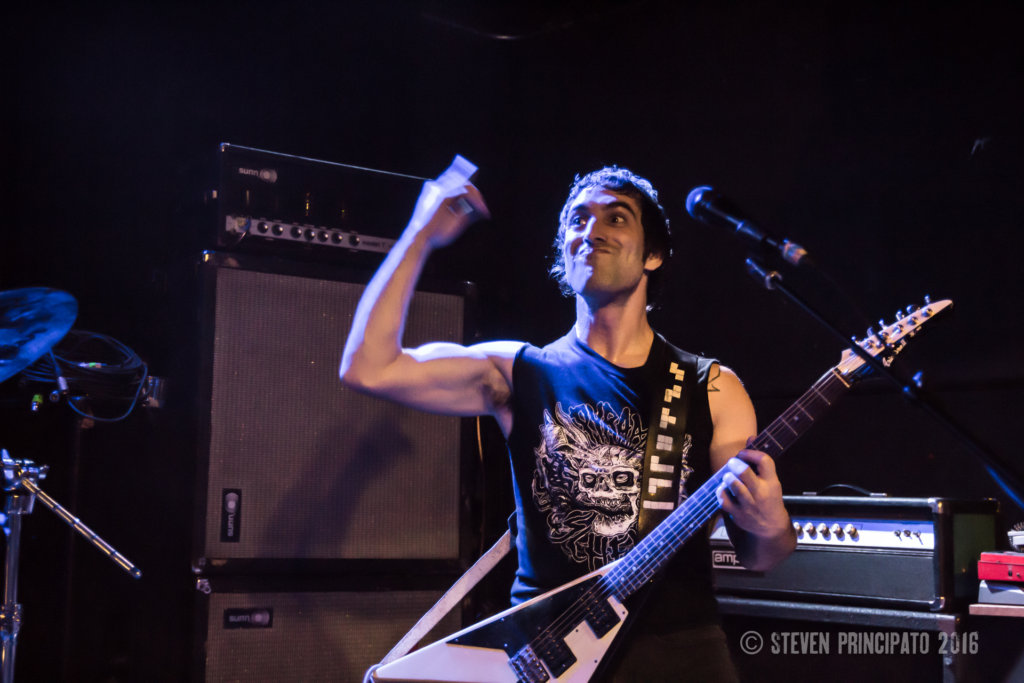 Emerging from the dark grind-core abyss that was the middle act, Headliner Mutoid Man had a tough act to follow.  However, this powerful power trio appeared to have the situation firmly under their control from the  very first notes to be projected from their vintage amplifiers. Allegedly originating somewhere in Massachusetts, Mutoid Man actually falls under the “supergroup” category as the result of Vocalist/guitars Stephen Brodsky and drummer Ben Koller’s previous notoriety in various bands. Hitting the stage with an unusual level of good vibes, humor, and big smiles for any given metal band in their element, Mutoid Man’s total disregard of the stiff rank-and-file bounds that restrict most live metal performances enhanced their already energetic stage performance and allowed for an accessible “bunch of cool dudes” feel, easily winning any previously unsure concertgoers over with ease…(or maybe it was a result of them giving the crowd whisky?) Regarding how they actually sounded, it would be unfair to simply label Mutoid Man a “Metal Band”; In other words, with about a million different complex riffs and time changes squeezed into some rather brief songs, one might dare to slap a progressive label on these highly talented mutants, but i’m not so sure..Forgive me, but can we coin the term “prog punk” for the very first time rather than the common and overused “prog metal” tag? Either way, despite being unofficially sponsored by Aria Pro guitars with imitation Shenker paint schemes, this demonically talented and nuclear energy leveled trio delivered a performance nothing less than legendary under the claustrophobic confines of Saint Vitus.  With that in mind, be sure to check out Mutoid Man’s latest release Bleeder, available on Sargent House records.

Finishing the night having experienced a total of three unique, talented, and vastly contrasting bands reinforced the very proof of life regarding rock and roll as a force of nature and further discrediting the ongoing yet lazy belief that rock is dead- and on that note once again, Saint Vitus bar provided the humble and accessible rock-star free environment that larger venues can’t match.