Australian quartet The Griswolds have dropped a new full length album…. And it’s good. REALLY good. Debuting at a top 10 spot on the iTunes chart, and quickly ascending the Alt. 18 chart, ‘High Times for Low Lives’ is blowing musical minds around the world.

Granted I am slightly biased. Seeing The Griswolds transform over the past few years from a band of four shaggy haired Indie-Aus rockers, to strapping multi-continental genre bending musicians makes me feel like a proud auntie. I spoke with frontman Chris Whitehall himself about his bands transition into musical maturity, him mentioning “I feel like we’ve learned a lot since creating the first album as most artists do. I think we’ve matured (a little), and become much more honest writers… We dreamed a little bigger this time and took more risks with this album, we wanted to stand out and not just be another ‘indie rock’ band making ‘indie rock music’.”

This album takes its listeners on a 14 track sensual and spiritual journey of sorts. From the far too catchy single “Out of My Head,” (which has an incredibly creative music video containing hundreds of pieces of fan art), to the funky Prince and Janet Jackson inspired ‘YDLM’ featuring Hip-Hop artist Lizzo, High Times for Low Lives covers a wide span of genre bases.

HTFLL has a special flare that most albums these days don’t have, thanks to Producer Andrew Dawson (Kanye West, John Legend, Jay-Z), who Whitehall says “Is a freaky genius mixed with a kid in a candy shop when it comes to production.”

But a personal (and band) favorite off of the album has to be ‘Rufio.’

“The title stems from Rufio, the king of the lost boys in the story of Peter Pan. The song is about some of the lonely times on the road and how that can lead to looking for the wrong kind of comfort to fix the hole that the loneliness has left. I guess being in a band that tours so much, [it’s] so much fun and there’s parties all the time etc. But we wanted to write more in depth songs about some of the darker times where it’s not always a party and it can actually be a struggle for us as band members. I felt last year like that struggle started to take over, and that I kind of became a lost boy for a while, so that’s where Rufio comes from.” -Chris Whitehall (Griswolds lead vocalist)

With all that said, The Griswolds just announced their U.S. “Low Lives Tour” to accompany the release of their new album, in which the band will be performing many of the new tracks from HTFLL for the first time in front of a live audience. So in other words, this is one tour you don’t want to miss. Pick up tickets quick for a city near you (tour dates listed below). 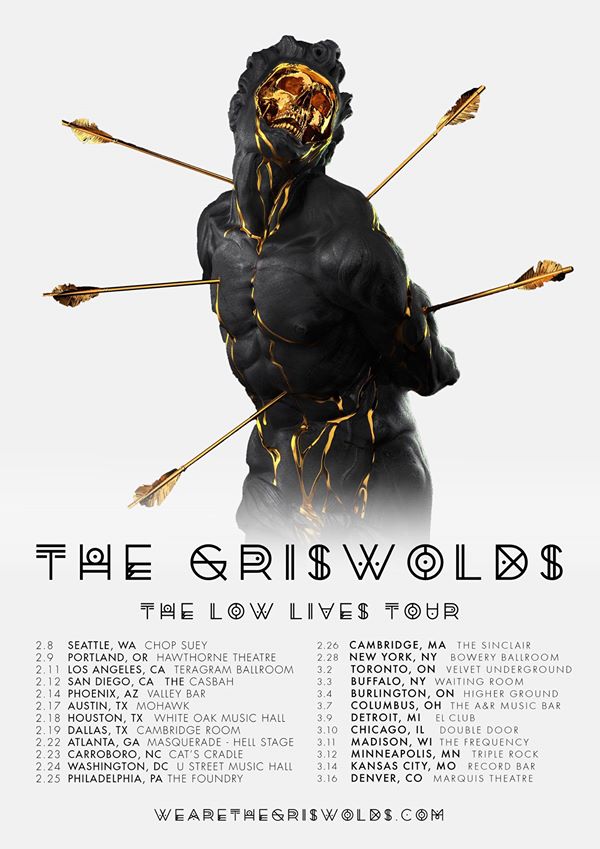 One thought on “Review – The Griswolds “High Times for Low Lives””