It’s surprising that it has taken this long for Jennifer Lawrence and Chris Pratt to pair up in a film. The two are easily the biggest actors in Hollywood right now, and love it or hate it, they seem to be conquering that every man/woman charm that people are eating up. However, no amount of charm can hide a genuinely disgusting and frightening message that Passengers puts forth. While the trailers might make it seem otherwise, a holiday date night flick this isn’t. 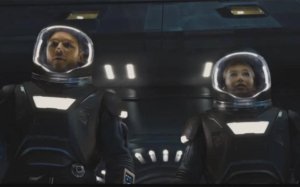 This review does contain a spoiler for a major plot point in the first third of Passengers, so read on at your own risk. While this was only hinted at in trailers (but flat out stated in official press releases for the film), it is nigh impossible to be able to accurately discuss the movie without revealing it. So, here we go…

Taking place in the far off future, Passengers follows Jim (Pratt), one of over 5,000 passengers put in cryosleep for a long 120 year trek to a brand new planet aboard the luxurious spaceship Avalon. One day after the spaceship takes a couple hits through an asteroid belt, Jim’s pod wakes him up and brings him on a grand tour of the sprawling space station. Only problem? As far as he can see, he’s the only person awake. As if things couldn’t get any worse, Jim has ninety years before he reaches his new home, and he can’t go back in his cryogenic state.

Drinking his days away with android bartender Arthur (Michael Sheen), he finds himself infatuated with a beautiful passenger by the name of Aurora (Lawrence). Besides her name being unbelievably on the nose—you can practically hear the screenwriters patting themselves on the back for that one—Aurora is a world famous journalist who seeks to be the first person to chronicle humanity’s first years on a brand new planet for everyone back on Earth to read, as well as being the sole person Jim wants to meet in person. Jim really could use some company—after all, being stuck on a space station alone for about a year would drive anyone insane—but at the same time, he’d essentially doom her to the same kind of hell that he has been trapped in.

This is quite the ethical dilemma, and one that a good script could have gotten some great mileage out of. Instead, Passengers essentially relegates to a thirty second montage of Chris Pratt looking conflicted before finally breaking Aurora out of her long sleep, without her realizing it. And that is exactly where Passengers begins its downward spiral into blatant sexism and been there, done that mediocrity. Don’t take this the wrong way, as both Lawrence and Pratt do a fine job with what they are given—Lawrence a little more so—and their chemistry together is okay, and helps to keep the movie going. The futuristic designs of the Avalon are pretty cool too, albeit kind of sterile, and gave off a definite 2001: A Space Odyssey vibe. 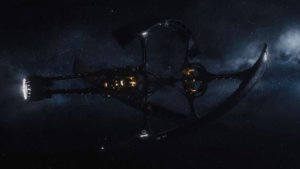 Despite all of that, it is nearly impossible to get past the uncomfortable elephant in the room plot wise that Passengers casually lets in, but never really addresses. While it can be attributed to loneliness, the fact that Jim digs through all of Aurora’s written works and history before he wakes her is kind of creepy, not to mention the fact that he spends most of his time hanging around her comatose body. This is all fine and well if the movie treated this with any kind of seriousness or delved into why the characters would act or react in such a way, but instead it essentially resorts to Pratt giving the audience puppy dog eyes while basically saying, “What? This guy? A massive creep? Nahh.” 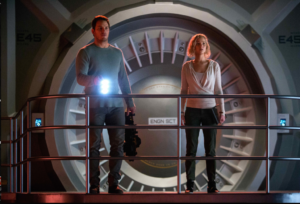 As if things couldn’t get any more challenging, the revelation that the Avalon’s malfunctioning is gradually becoming worse and worse forces the couple to save the other 4,998 comatose passengers from an untimely demise. Without spoiling too much, the ending essentially cements Aurora as a bona fide victim of Stockholm Syndrome and glorifies the stalking that Jim goes through as a picture perfect example of love and romance. 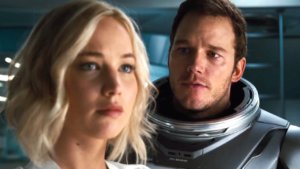 Simply having Jim and Aurora wake up at the same time could have made Passengers an immensely better product. Sure, this would be more than a little cliché, but it would then avoid having to deal with the awkward situation at hand. It’s impossible to tell if this unfortunate subtext was intentional or not in the plot—the script itself has been bouncing around from writer to writer since it was written back in 2007—but as it is, Passengers is a surprisingly regressive outlook on relationships, a position that is so overwhelming that it even makes the ever so lovable Chris Pratt appear more like a psychopath, and feminist Jennifer Lawrence seem a woman who can’t live without a man. This alone makes Passengers impressive, but not in a good way.

One thought on “Passengers – Movie Review”