Skip to content
You are here
Home > MUSIC > 3TEETH TO RELEASE NEW ALBUM, ‘<SHUTDOWN.EXE>,’ ON MAY 19TH VIA OMF RECORDS

March 7, 2017 – Los Angeles, CA – Los Angeles based industrial band 3TEETH has unveiled plans to release their highly-anticipated, second full-length album, <shutdown.exe>, on May 19th via OMF Records. Today, the band reveals the album title, release date, artwork and track listing for the upcoming record. Additional details and music will be disclosed in the coming weeks. Follow the band at https://www.facebook.com/3Teeth for additional updates.
3TEETH’s <shutdown.exe>, the long-awaited follow-up to their self-titled, 2014 album, was self-produced by the band, mixed by Sean Beavan (Nine Inch Nails, Marilyn Manson, A Perfect Circle) and mastered by Howie Wienberg (Deftones, Nirvana, Pantera, Smashing Pumpkins, Soundgarden). The album features 13 songs that push their sound into new, undiscovered realms of orchestrated chaos and divine carnage with their signature fusion of experimental industrial, metal and synth driven rock that the band has become known for over the last several years.
Watch 3TEETH’s video for “Atrophy” from <shutdown.exe>: https://youtu.be/uabChNfWAcM
“3TEETH are more than the sum of their influences. They are the sound of inevitability. A storm of rage and reason, man and machine, metal and bone.” – Sean Beavan (producer/mixer Nine Inch Nails, Marilyn Manson, A Perfect Circle)
Discussing the concepts behind the new record, frontman Alexis Mincolla says, “”The album centers around the idea of shutting down consensus reality tunnels, which is a way to describe the generally agreed-upon perspectives of what is considered real.”
Formed in 2013 in Los Angeles, 3TEETH is a transgressive artistic collaborative consisting of Alexis Mincolla (vocals), Xavier Swafford (keys), Andrew Means (drums) and Chase Brawner (guitars). Inspired by the early 90’s industrial scene and acts like Ministry and Nine Inch Nails, the four-piece boasts a unique amalgam of aggressive sound and compelling visual art that, combined with their cynical humor and provocative propaganda, ultimately ask fans to join their assault on consensus based reality.
Following a monumental, 2016 tour of the U.S. with legendary rock band TOOL, 3TEETH is riding a wave of momentum and anticipation leading up to the release of <shutdown.exe>. Stay tuned for more details regarding one of the year’s most awaited releases. 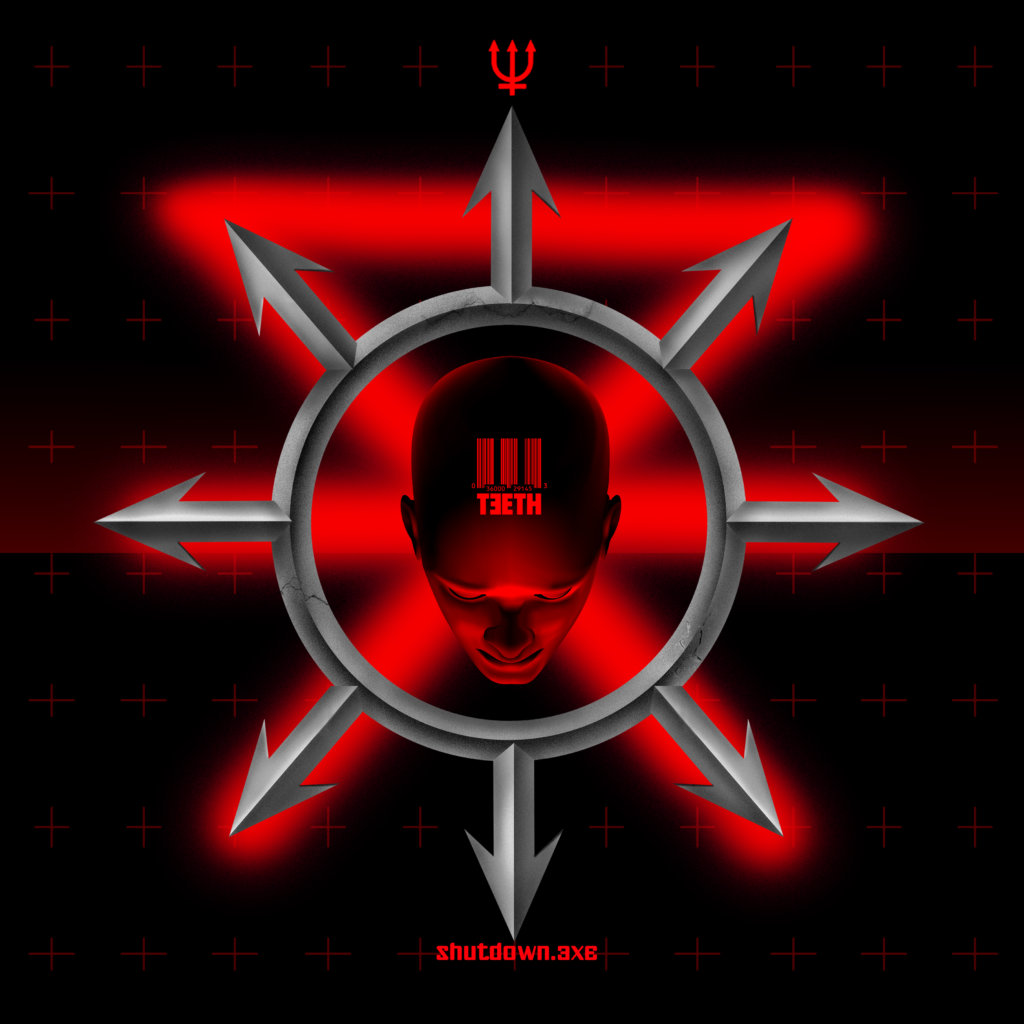