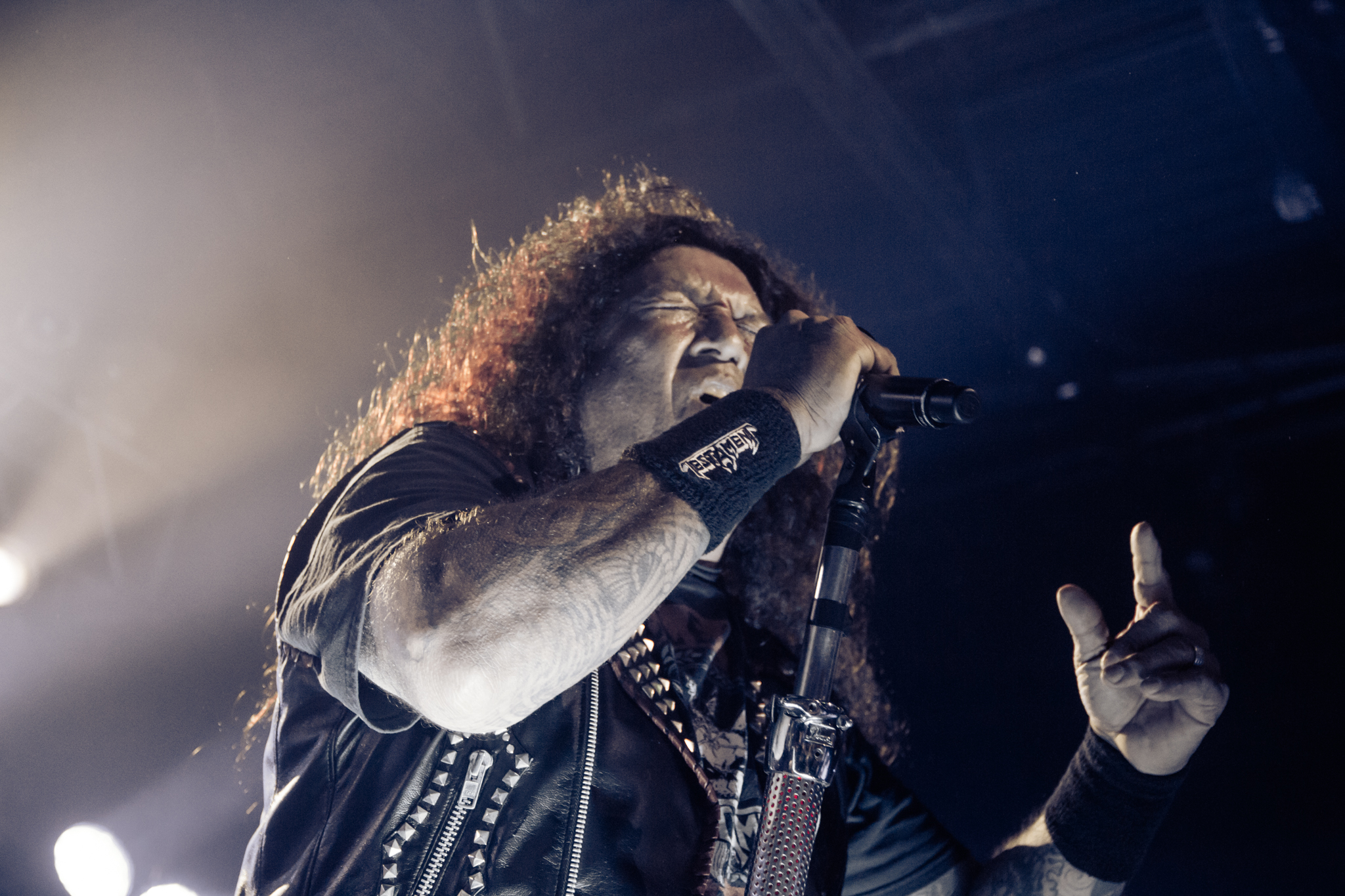 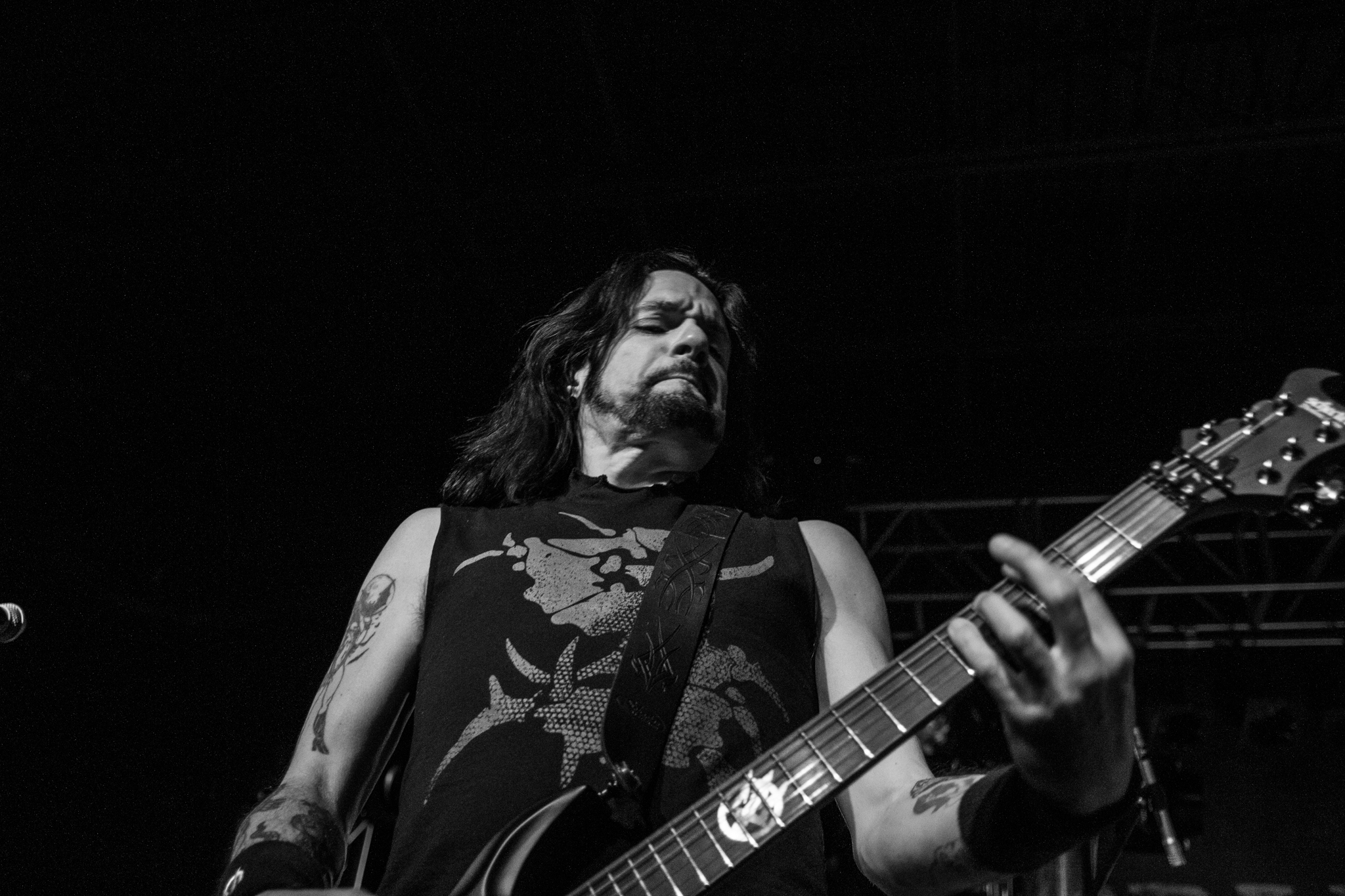 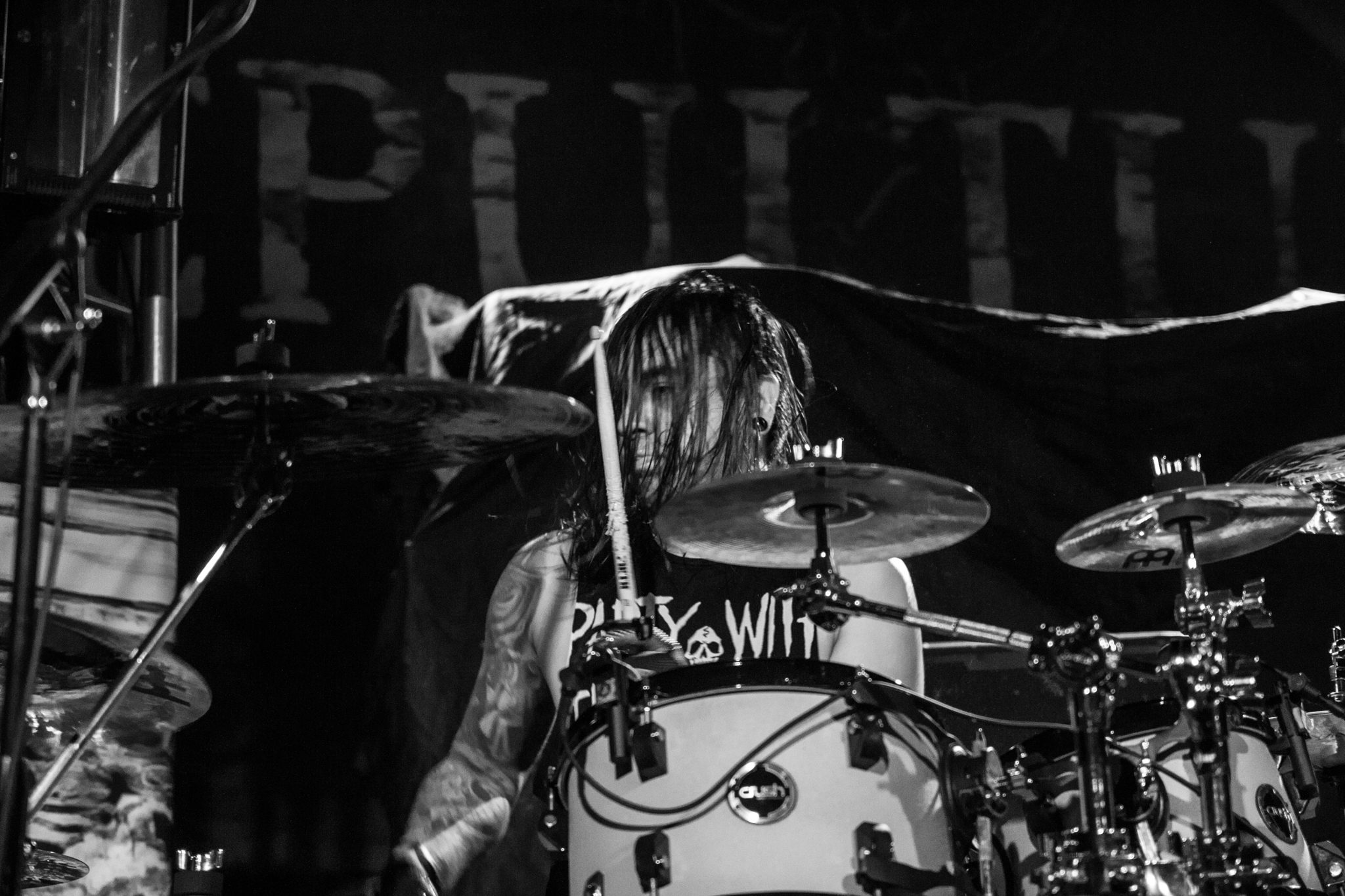 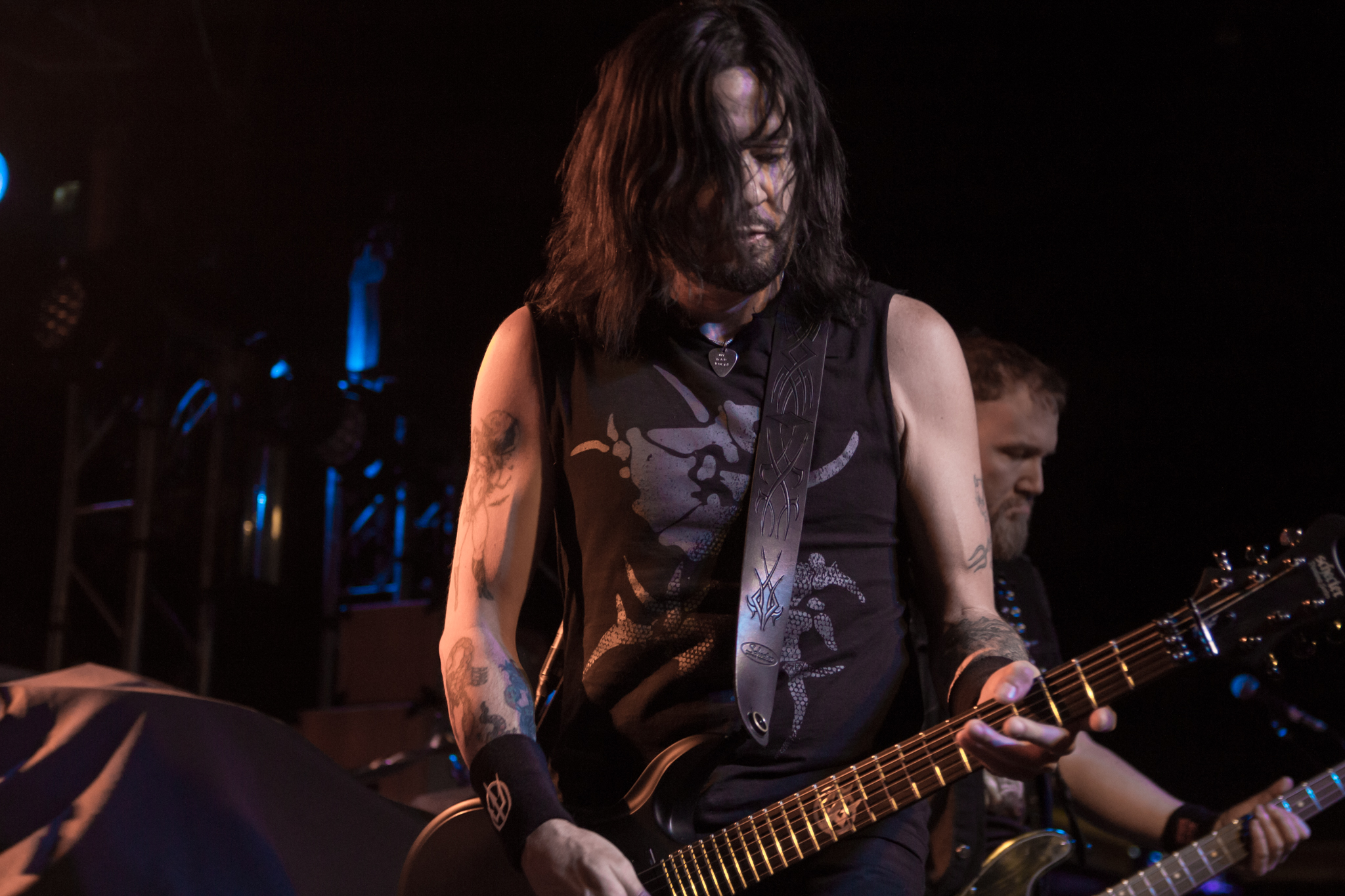 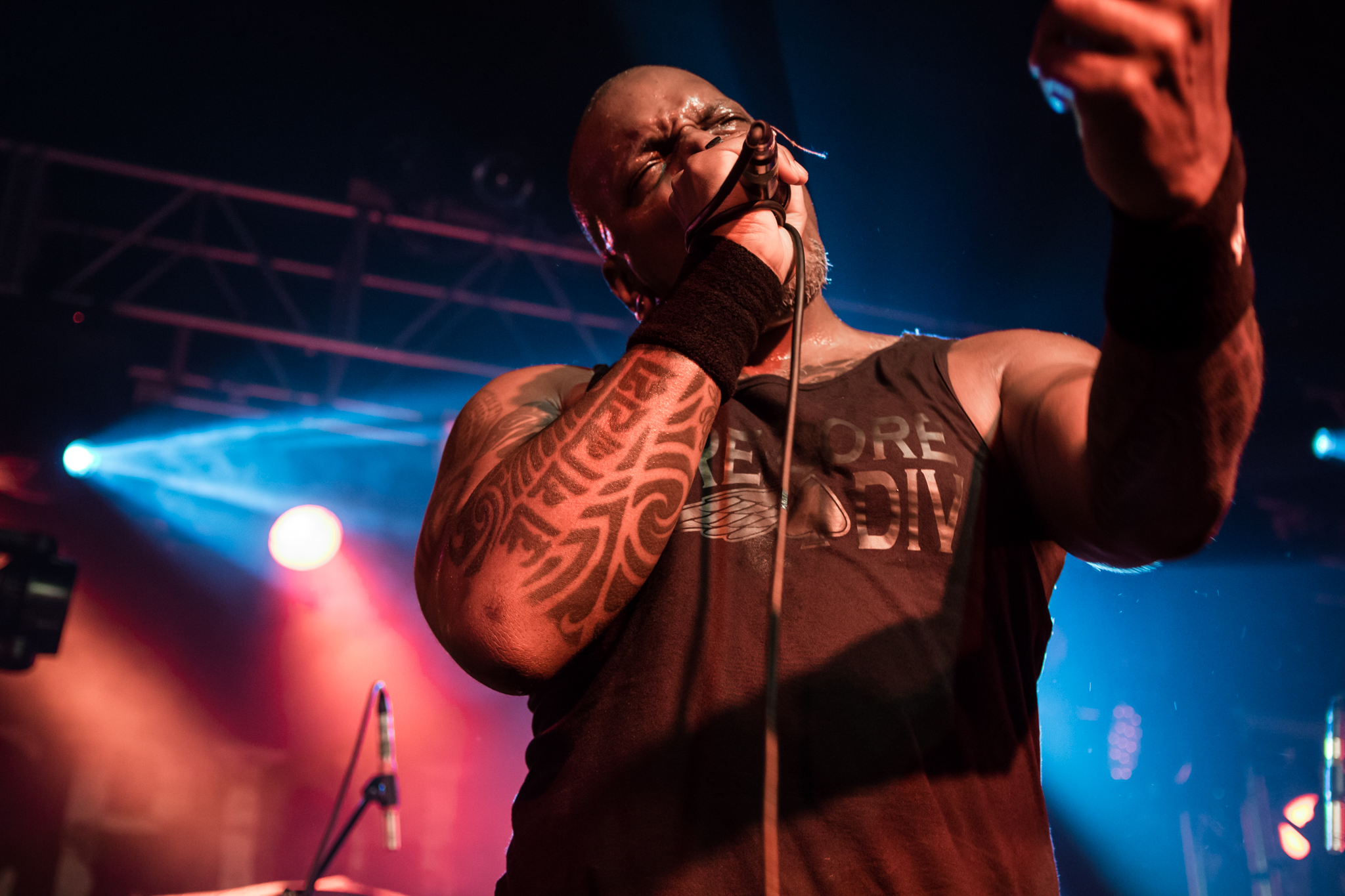 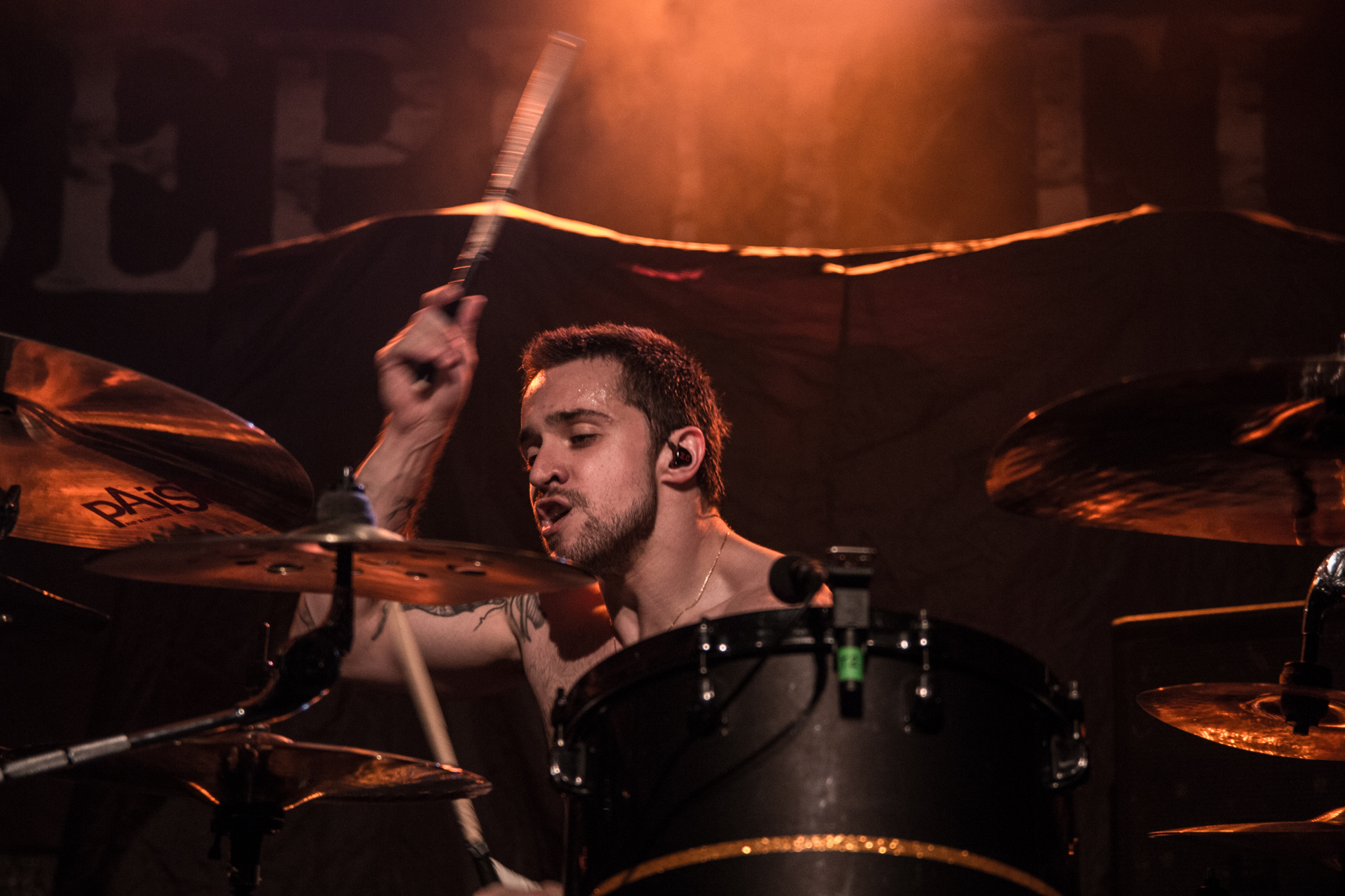 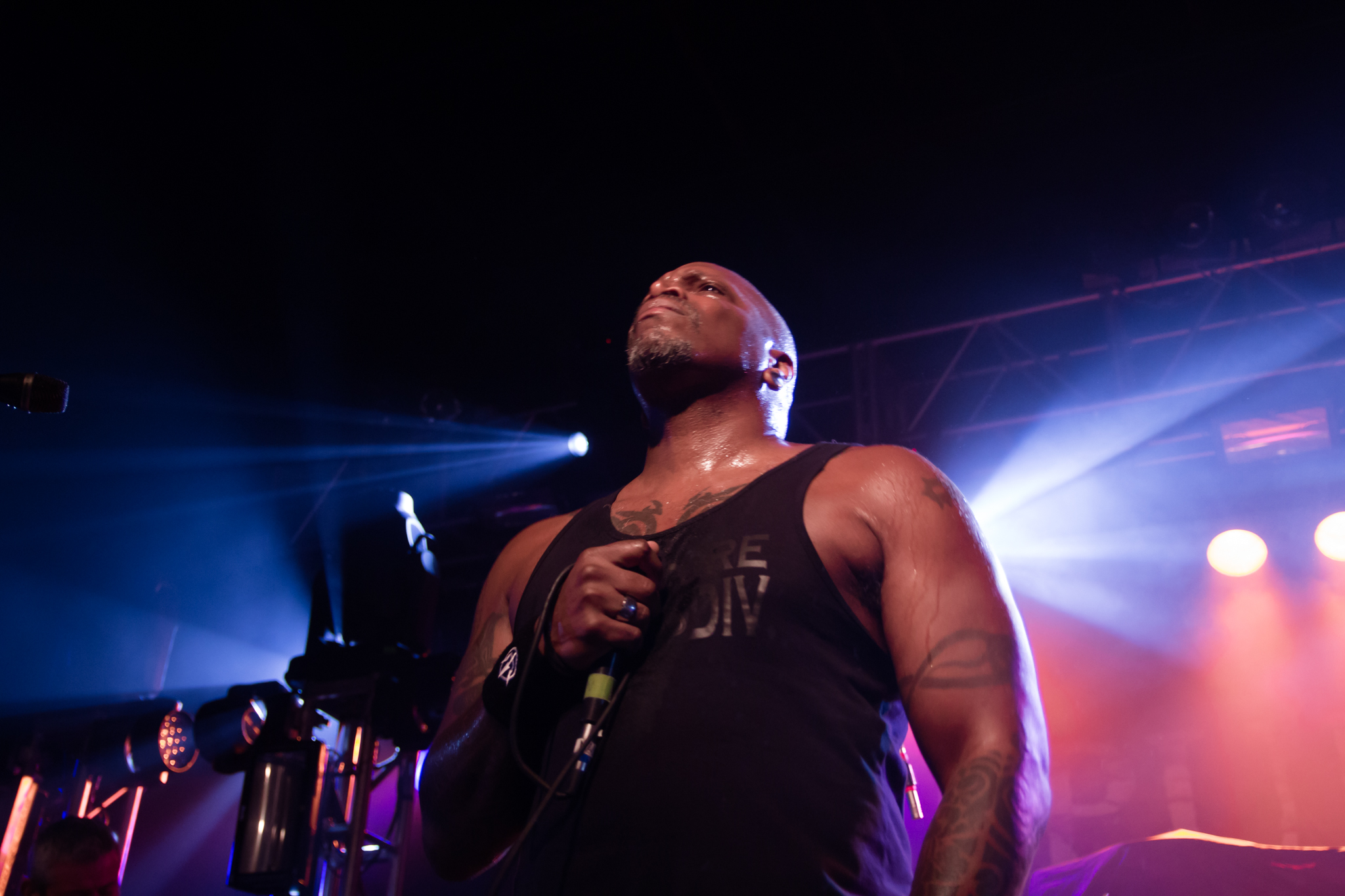 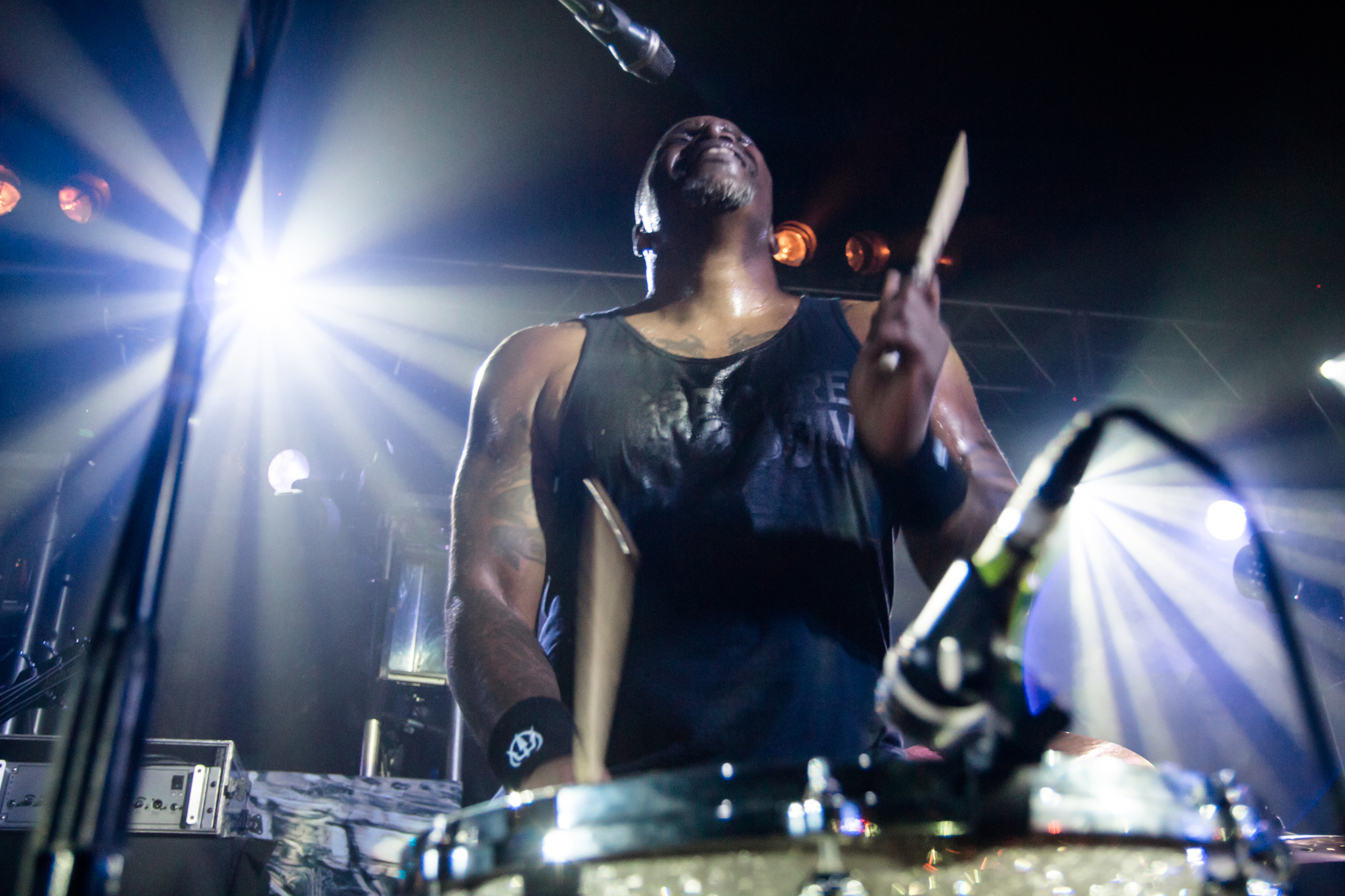 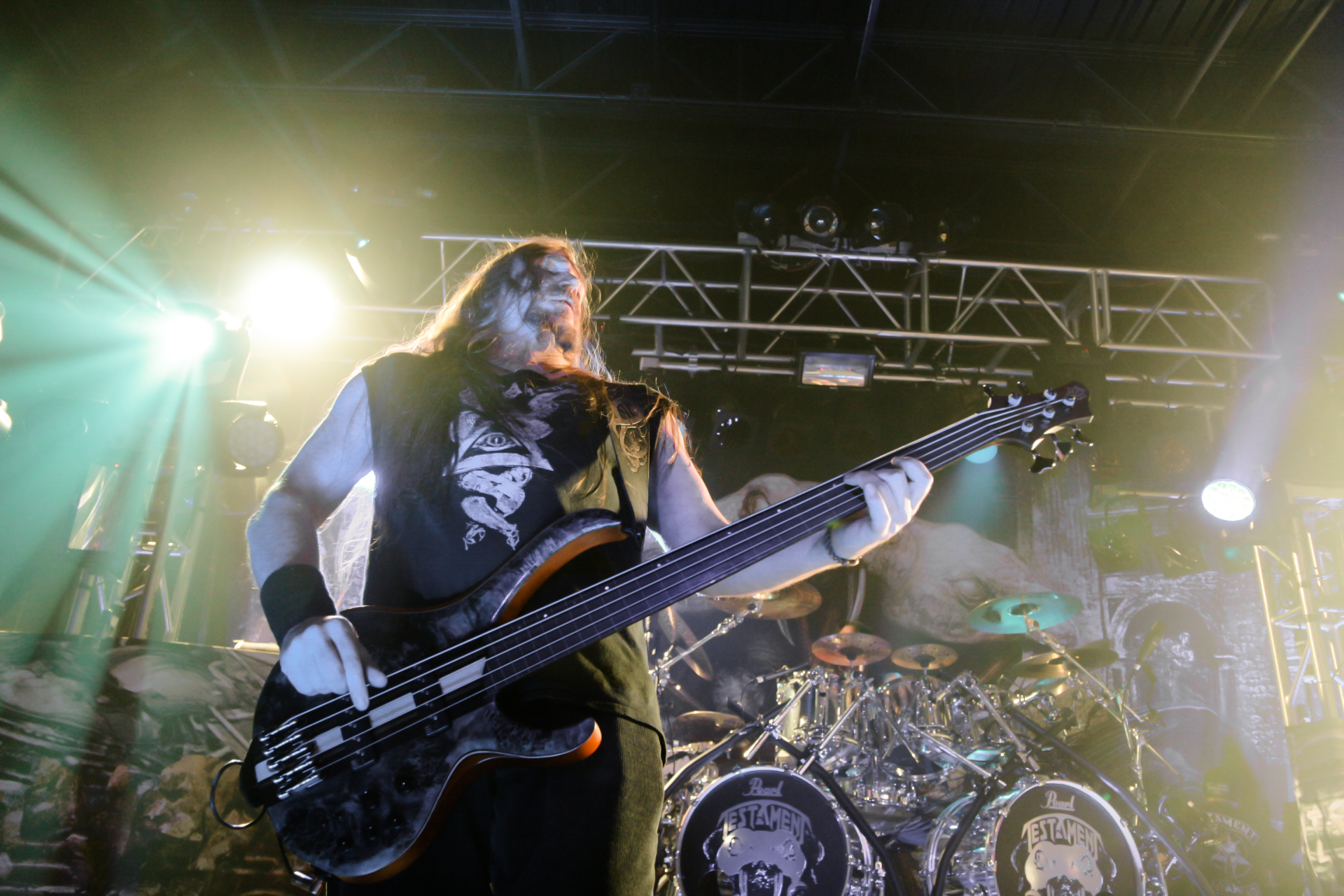 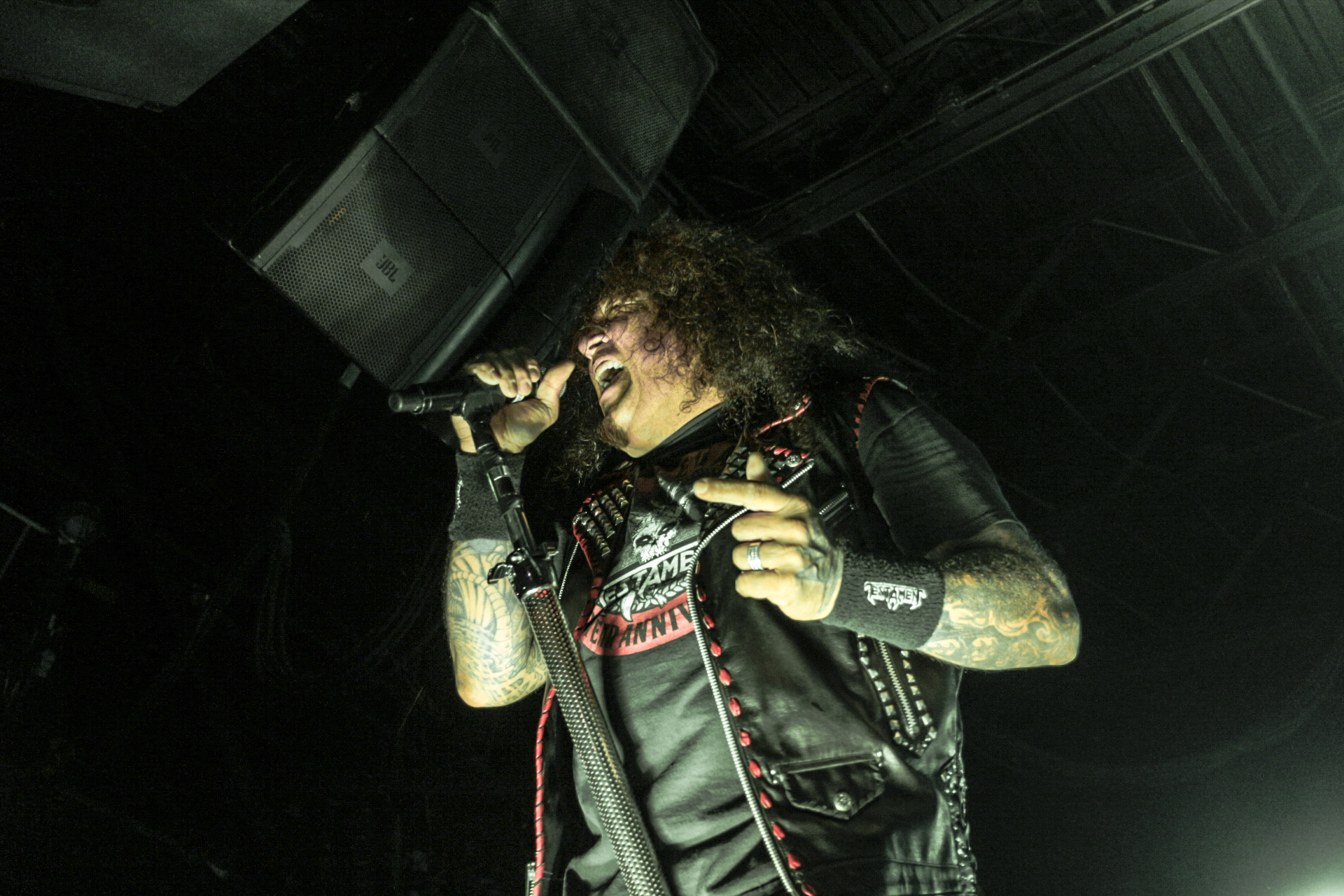 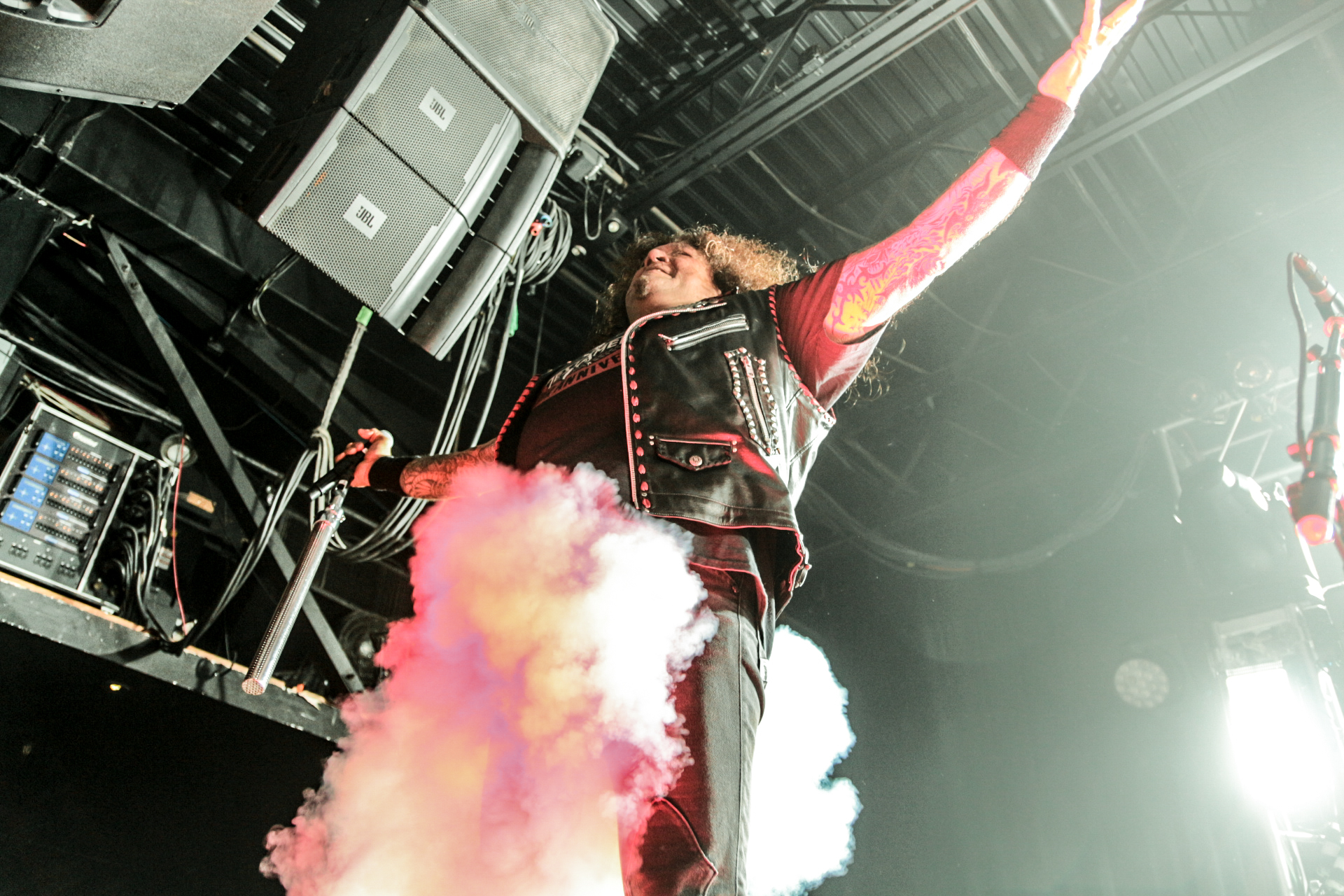 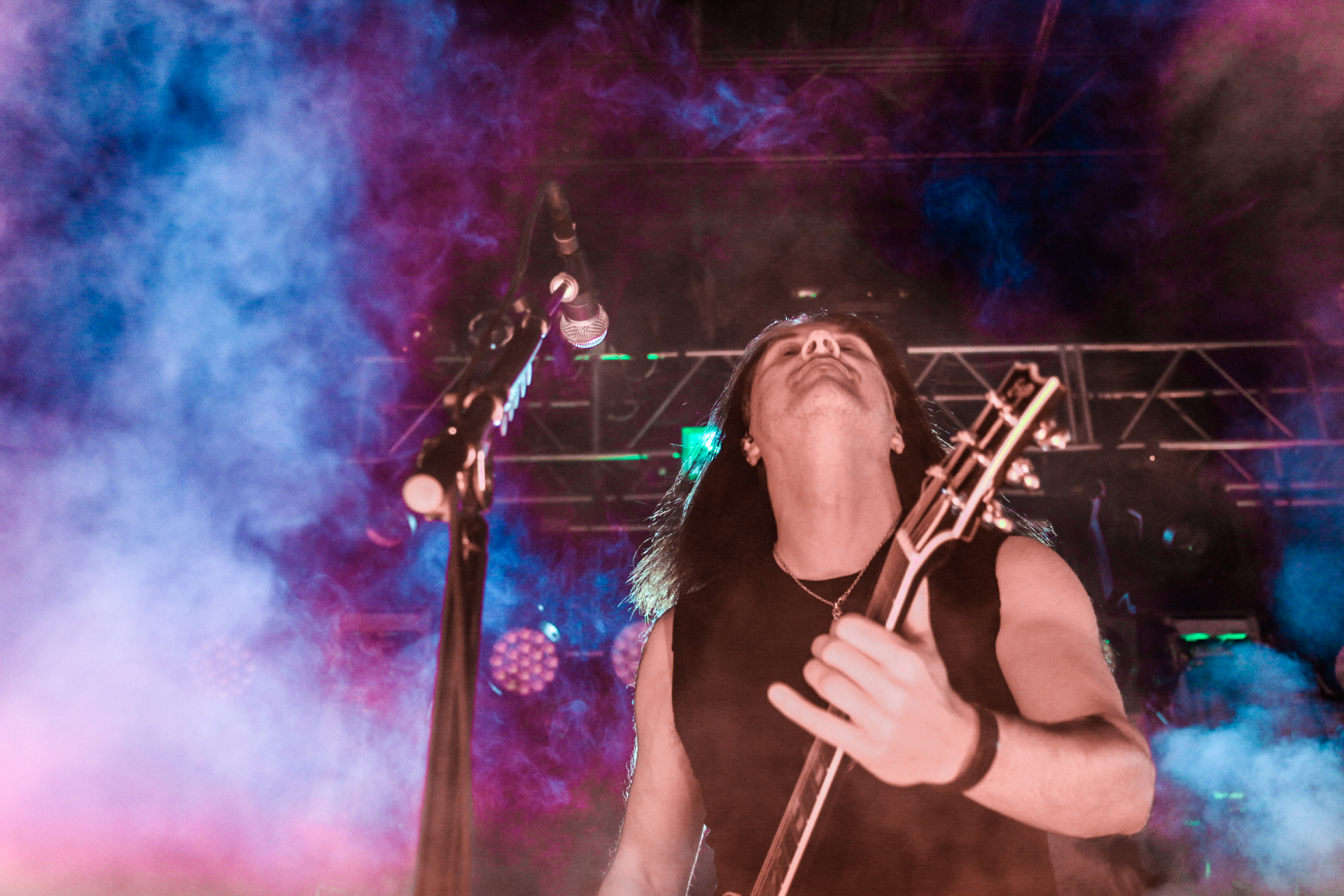 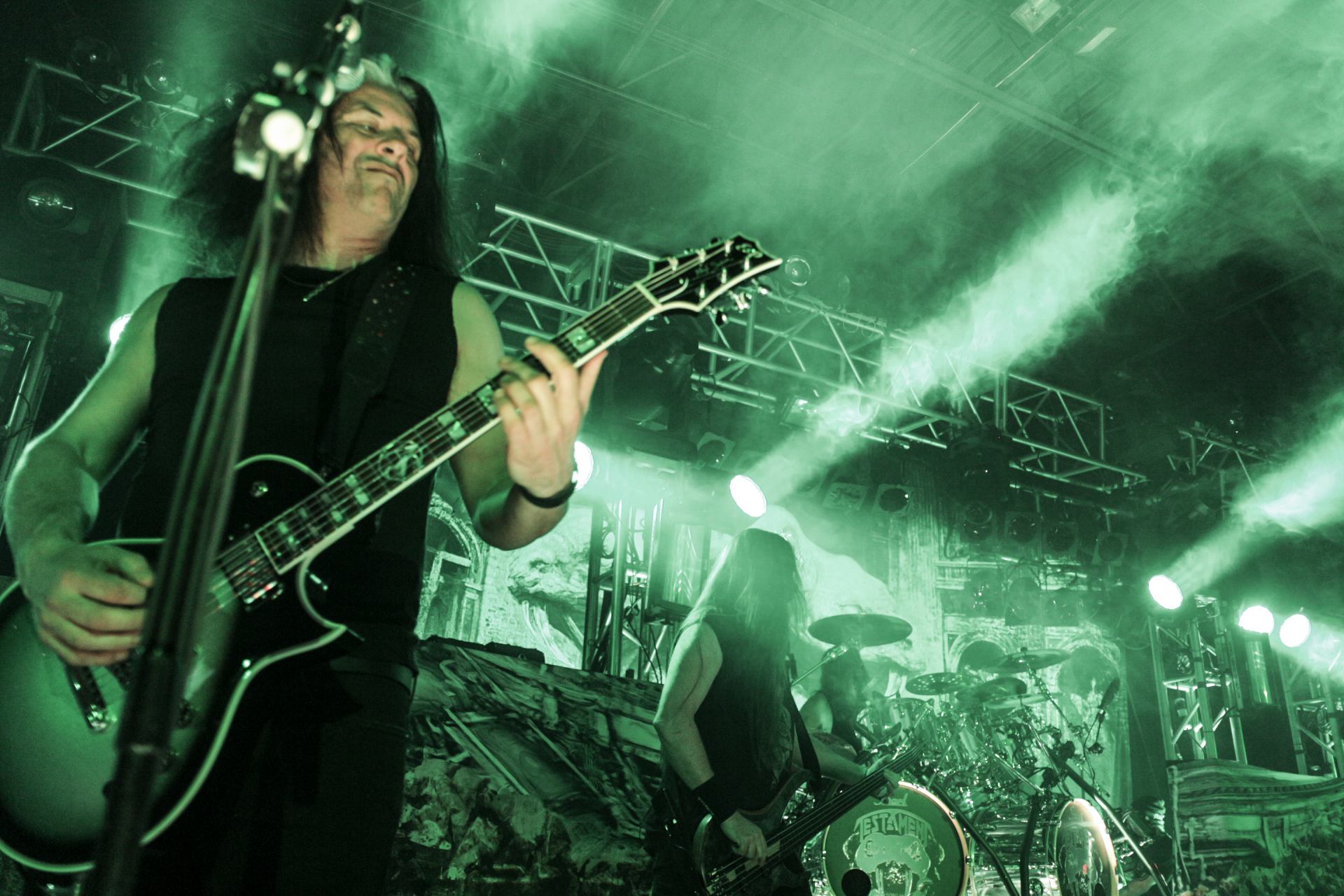 Articles and Photography by Steven Principato

Sayerville, NJ – In the continuing struggle of keeping the eternal flame of classic metal burning brightly, a triple edged assault comprised of legendary acts Prong, Sepultura, and Testament arrived at NJ’s most popular rock venue, vowing to uphold their 30 plus year obligation of hearing damage, bruises, and wrecked necks once again.

Taking point with no pun intended, New York’s own powerful trio, Prong led the assault with a collection of memorable anthems spanning  their glory days such as “Prove You Wrong” and “Snap your Fingers,” taking the audience back to an age of dial-up internet and Nu-metal radio domination.  Lacking no intensity or vitality at this point in his impressive musical career, including a lead-guitar role with Glenn Danzig and Ministry, Prong Vocalist/Guitars Tommy Victor unleashed his maximum fury upon the raging headbangers below, sparing nothing – including his own back-line at one point. Besides the minor technical mishap, Prong successfully stabbed the nostalgic hearts of every headbanger in the venue, elevating their fury and excitement for what chaos was to come.

Next in line to smash what remained of the already battle damaged stage was Brazil’s own metal band of endless legend, Sepultura. Needing no introduction to anyone on this planet that has ever heard of metal, Sepultura, despite the absence of their founding members encountered little resistance in obliterating an already shaken audience under their skull-crushing riffs. With vocalist Derrick Green roaring the lyrics of fan favorite tracks such as “Bloody Roots” and “Refuse/Resist” while beating out tribal rhythms on his own personal tom drum, Sepultura delivered the commanding performance that once would expect from a band helped drag real metal into this century and eternity.

Ultimately taking the stage to headline this night of epic metal was the Bay Area’s most authentic thrash band, Testament. Rising up in the golden era of thrash metal, Testament, along with fellow Bay Area metal-heads, Metallica, Exodus, and Death Angel unleashed a musical cataclysm that still resonates in bands to this very day. As the gravel-voiced Chuck Billy preached his wayward gospel through his trademark pseudo-Hetfield style under an overwhelming display of smoke and lights upon his headbanging parishioners, Super-guitarist Alex Skolnick shredded in and between tracks in his life long mission to make the guitar solo great again. Flanked by the actual rhythm section of death metal Pioneer, Death; Both veteran skins-man Gene Hoglan and bassist Steve Di-Giorgio along with Testament founding guitarist Eric Peterson belted out Tracks from the band’s latest effort titled Brotherhood of The Snake (Nuclear Blast 2016) to revered classic anthems such as “Practice What Your Preach” to the delight of every metalhead before them, both young and old.

Since the the “Brotherhood of the Snake” tour only kicked off last month, you have plenty of time to catch this amazing collection of metal in a city near you.