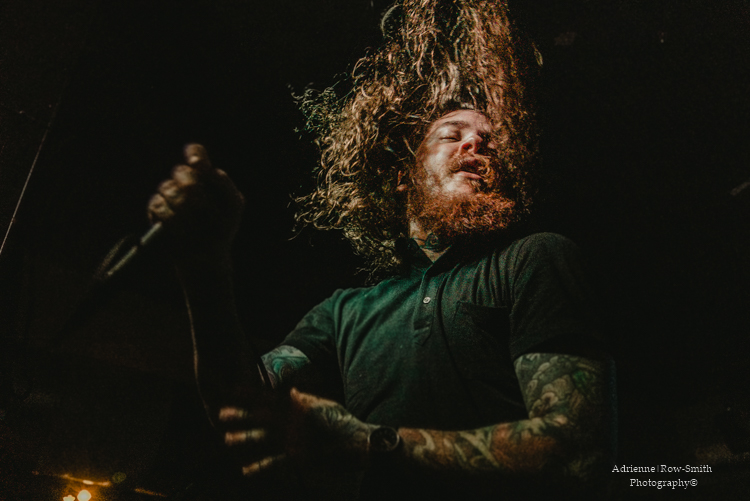 Ottawa – Ontario, the force was strong in Canada’s nation capital on may the 4th, as heavy hitters The Devil Wears Prada played a packed show at Mavericks, with the help of local bands WKFLD, Southpaw, and Horcrux.

Up first for the evening, was hyperactive 4 piece known as WKFLD (pronounced Wakefield), who played a set filled with songs from their self – titled EP, in addition to some new material. Vocalist Sandro Rausa, bassist Jeffery Wolfe and guitarist Jake Mulholland were unafraid to show what their songs meant to them, as they dove off stage and into the crowd. They moshed with those willing to enter the pit and became increasingly volatile as their set wore on. Overall, they proved that punk was not dead, it’s waiting to be released from Canada’s capital city.

Following WKFLD was metalcore five-piece Southpaw, who started their set off right with an intro track featuring terrible vocals in homage to Star Wars (May the 4th be with you!). The band sped through their set list, which featured a new song titled “Languish,” The band closed out their rowdy set with the song “Inside,” which saw folks in the pit being thrown around like rag dolls.

Not taking any hits to the energy provided, Horcrux tore into their set leading to a throng of individuals pushing and pulling in an effort to show the affinity for the songs. Throughout the venue, Horcrux was joined by any fans in the crowd singing along, creating a hauntingly intimate atmosphere. Sticking to the nerdy theme of the day, the band threw in the song “Dark Mark,” a clear Harry Potter reference. During their final song “The Outsider,” the band asked everyone to go down on their knees, and when the song kicked off everyone sprang up and did not stop moving until the song was over.

For the grand finale, The Devil Wears Prada played to a crowd packed like sardines, becoming a constant wave of movement rather than bodies being thrown into a mosh pit. Playing songs from most of their discography, the band’s set was predominately focused on their most recent releases such as like Transit Blues, and the ep Space, but also treated fans to some songs rarely played, such as “Assistant to the Regional Manager” off of 2009’s With Roots Above and Branches Below. Regardless of which song was being played, as soon as the band began the crowd went wild and sang as loud as they could, they even attempted to crowd surf or jump over others to show their appreciation for the band’s music. Vocalist Mike Hrancia reflected the crowd’s energy and never spent more than a few moments in one place. Hanging off the stage pillars to get further into the crowd or finger dancing on stage. He dominated the stage and was a definitive element to the overall performance. During their final song “Mammoth,” the crowd’s energy containment broke and saw many fans work through the crowd so that they could try to jump off stage and into the crowd.

With their set finished, the band took the time to thank the crowd by shaking hands and exchanging kind words. If you have an affinity for high-energy music acts, glass guitars and the occasional break down it is recommended that you check out The Devil Wears Prada if they come near you!