Va Beach, VA — Let the RAMPAGE begin — and begin, it did! From the very first chords that Jorma Kaukonen and Jack Cassady created, through the soulful and originally crafted interludes of Chris and Oliver Wood and instrumentalist Jano Rix, to the last energetic and extraordinarily skillful artistry that Derek Trucks and Susan Tedeschi displayed, the night was filled with the glorious sounds of guitars, horns, vocals, percussion, and even a standup bass. Folks came in droves to see the veteran musicians do what they have done so skillfully through the decades.The amphitheatre was filled with a wonderful mingling of anticipation of what was to come, and feelings of extreme excitement and electricity.

Hot Tuna took to the stage while an intimate and attentive crowd cheered loudly. Hard core fans jumped up out of their seats and danced in the aisles of the theatre. With every song they played, many sang along to every word and it was almost as if there was a type of family reunion going on where familiar musicians gathered together in the security of someone’s home and created lasting musical memories. The crowd was mesmerized by the seemingly endless electric guitar solos. Jorma Kaukinen took a moment to welcome the many musicians in attendance, and even went so far as to ask all of the musicians in the “house” to stand up. Their performance was a representation of their history as a band since 1969, and bounced from acoustic to blues to heavy metal to electric. They were joined by percussionist Justin Guip who provided a sweet rhythm repertoire to be envied by many.At the end of their set, there was a sea of happy, laid back musicians and loyal fans. 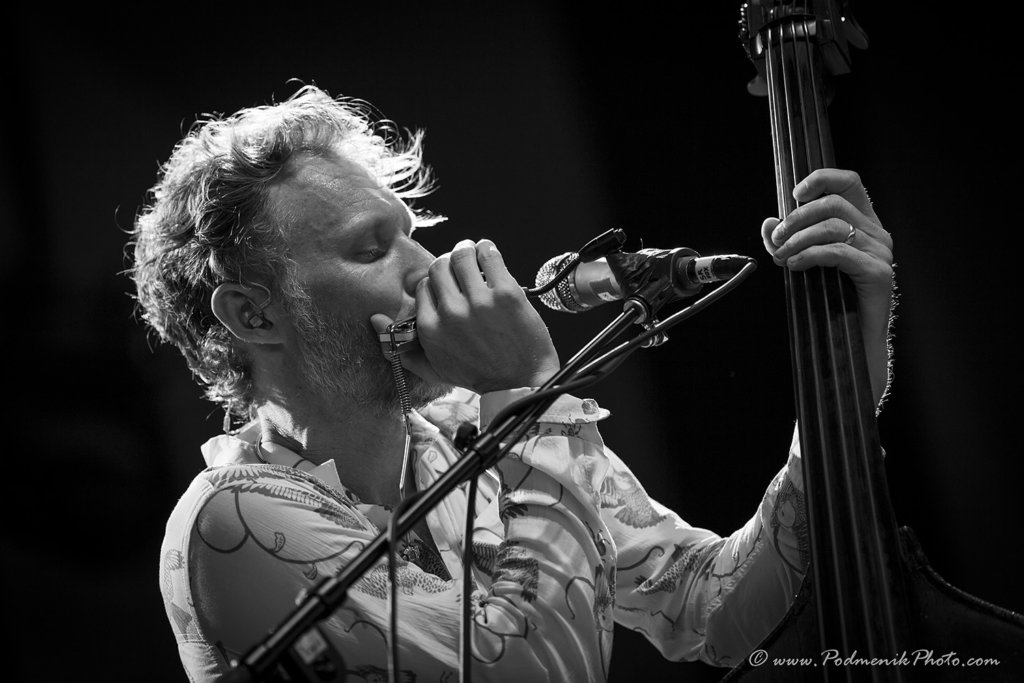 The Wood Brothers entered stage left with a stage empty of any extra lights, fog machines, or flashy props. No frills? No need!! Chris Wood had his harmonica and stand up bass. Big brother Oliver entered the arena with a sole guitar and stepped up to a lone microphone. Jano Rix, who provided amazing harmony vocals as well as percussive support, possessed merely oneguitar. Jano started their set off by tapping and thumping on his acoustic guitar to begin, what would be the underlying feeling of the music for them, cool folk sounds. As they began to play, there was a raw musical style that grabbed the attention of everyone around us. There was a distinct and purposeful rhythm of percussion, but there was no instrument….or was there? Apparently Jano had no need for a drum kit in order to help the band feel the heart beat of the music. The trio had an absolute plethora of musical talents that were a refreshing surprise. One of the highlights of their set, was when Chris began a dance, not unlike the Futterwacken Mad Hatter Dance performed by Johnny Depp in Alice In Wonderland, while still holding on to his standup bass. I am sure that the most memorable thing about these guys was their incredible harmonies. It is awe inspiring that these brothers can produce such unique sounds from instruments in a seemingly effortless way, it gives new veneration to the word “musician.” Cool earthy vocals and lead guitar, combined with their family harmony, made for a folky bluegrass sound that can only be The Wood Brothers.

By the end of the Wood Brothers’ set, there was a huge party in the aisles. There were no filled seats, everyone was up and moving in spite of the overwhelming heat. All we needed was a beach ball and Woodstock was relived! At 9:18, Tedeschi Trucks took the stage. 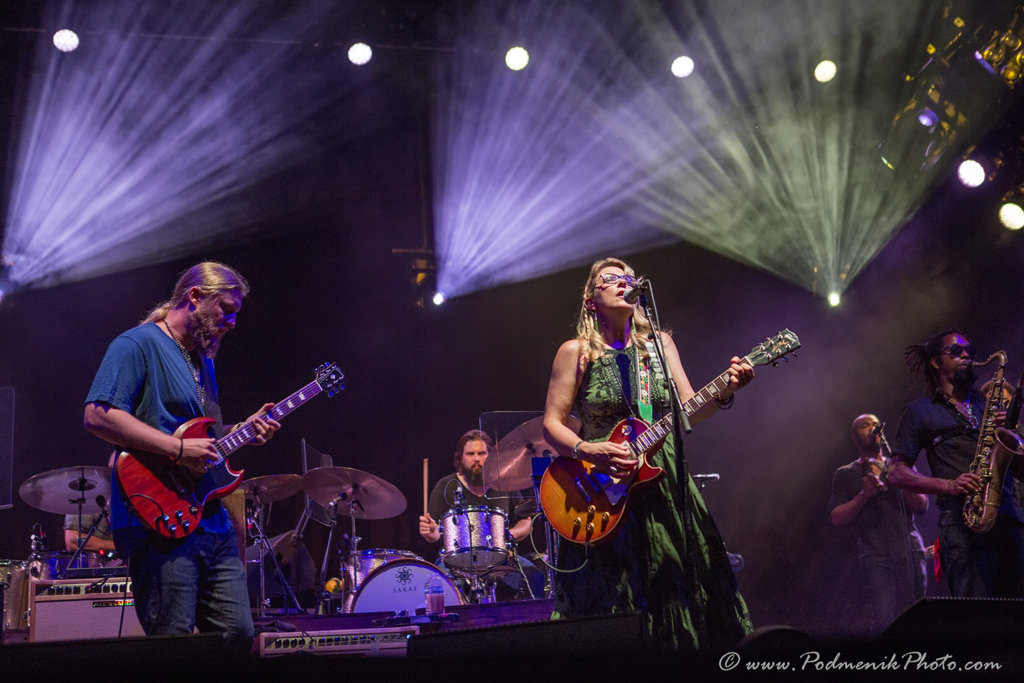 Heavy instrumentals marked the set that ensued. The superior musicianship from every member of this 12 piece musical family was intense, to say the least. Susan Tedeschi’s voice was so powerful and strong, that she easily commanded the attention and admiration of everyone within ear shot. Derek Trucks continued “The Rampage” with insane guitar solos and an incredible playing style that has certainly been one of the most revered in music for decades. It was so very easy to see why this band won the 2012 Grammy for Best Blues Album for their debut album “Revelator”. Obviously when you marry the members of the Derek Trucks band with Susan Tedeschi’s Soul Stew Revival, you create the artistic musical entity that has become the Tedeschi Trucks Band. After all, when a twelve piece band erupts onto the stage with two drummers and two full drum sets, a tenor saxophone player, a trumpet player, a trombone player, three beautifully harmonious backing vocalists, a keyboard player, a guitar god, and a songstress like Susan, one hell of a show will soon ensue! One thing is for sure; if these bands tour anywhere near your hometown, do not take the chance of missing them! You will be sure to be exposed to what is one hell of a Rampage!