Yes, Spoilers below. Read at your own risk.

Season 7 of Game of Thrones is ending in just over two weeks. Let that sink in for a second. Two weeks and we’re back to waiting another year for the endgame to what is, by now, with its multi-ethnic and international cast and exotic shooting locations, the most popular television show on the planet. It’s television that has somehow surpassed film in terms of quality, depth, and complexity, that has managed to develop a massive fanbase without watering down or neutering the often graphic subject matter in order to be more accessible, and it’s captured a mainstream audience while being a show about dragons, zombies, and politics. Who knew how prophetic Revenge of the Nerds was going to be back in the day, because it’s a fantastic time to be one. If only Star Trek didn’t suck so much lately, life would be close to perfect. This season has had its ups and downs, some weak episodes and particularly strong ones, and plenty of variety five episodes in, so lets take a moment, a couple weeks before the penultimate season ends, and see where everyone stands.

This week’s episode Eastwatch was the biggest head-fake that we have seen so far this year and it’s the episode that made me feel like some of things that made the earlier seasons so great, the interactions, the maneuvering, and posturing, are still possible in the show after it has diverged so far from George R.R. Martin’s source material. Earlier episodes in the season, particularly the first two and the emergence of Euron Greyjoy as a prime-time player, felt unnecessarily rushed and stunted. Travel times are a joke at this point with characters setting off and arriving within minutes at locations half a continent away, armies are zipping around and popping up where they couldn’t have been and whole fleets of Iron Born are teleporting around the ocean in anticipation of Daenerys’ every move. But after the explosive, thrilling final act of The Spoils of War, where the Dragon Queen finally lets her dogs off the chain and shows Westeros exactly who they are fucking with, the episode that followed took a much needed break to gather itself again. In fact, there was one explosive moment in the episode (besides the practical end of House Tarly, farewell, we barely new ye), and it was exactly the opposite of that. Instead, it was an off-handed remark by young Gilly, the poor daughter from Craster’s Keep who could not read when she was first discovered by Jon and Sam north of the wall. Her casual observation — while reading an old Septon’s overly detailed records, was interrupted and ignored by Sam who is in a desperate hurry to find something useful for Jon to use against the coming darkness — has the ability to flip the whole world on its ear. 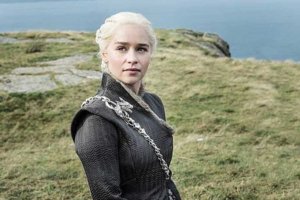 In case you missed it, “Maynard says here that he issued an annulment for a Prince ‘Ragger’ and remarried him to someone else at the same time in a secret ceremony in Dorne. Is that a common thing in the South or …” Prince Ragger sounds a lot like Prince Rheagar, as in Prince Rheagar Targaryen, older brother to Daenerys. And if that someone else is who we think it is, one Lyanna Stark, who was confirmed via smash cut last season to be the actual mother of Jon Snow, well. That means Jon is not, in fact, a bastard, but rather Jon Targaryen, rightful heir to the Iron Throne. How, or even if, this can ever be revealed remains to be seen but this might explain what Lyanna was whispering to Ned Stark on her death bed while Bran looked on. Jon doesn’t seem to have any ambition beyond protecting the North and, if I had to bet cash money, I believe he’d abdicate his claim in favor of Daenerys, and if he did so in a grand and potentially romantic gesture, and at the risk of inventing fan-fiction, swoon. Anyway, this knowledge would be pretty devastating for Jon himself, as so much of his identity is formed around being a bastard and an outsider, it’s unlikely he’ll want anything to do with ruling King’s Landing.

Speaking of Daenerys, until the attack on the Loot Train and the Lannister forces, she seems to have completely lost much of the steam she had at the end of season six when she set sail from Meereen. There’s been a lot of hand-wringing this season and with so many advisors, a kind of ‘too many cooks in the kitchen‘ feel to her councils. Now that she’s back in Westeros, with two standing armies, a fleet, and a triptych of dragons at her command she’s suddenly tip-toeing through the tulips when confronting Cersei’s out-classed, out-numbered, and over-powered forces. Her reticence has arguably cost Lady Olenna, Highgarden, and House Tyrell their lives and all the resources at their disposal and it’s going to continue to cost her regardless of Cersei’s newfound interest in an armistice. This is the height of foolishness, as relieving the pressure on House Lannister only gives them time to recover and marshal resources from the Iron Bank when the smart thing to do, while still avoiding burning the entire city to the ground, is to just burn down the Red Keep. Cersei and her family are not exactly well loved by the people and just the sight of Daenerys’ dragons over the city is going to be enough to shift their alliance.

Instead, Jon has convinced her to focus her energy on the coming of the Undead Armies, which is a little difficult to feel any suspense over considering how many times we’ve been treated to scenes of their armies marching south. They’ve done so much walking, in fact, that they walked right over Sam at one point and still had so much walking to do that they ignored him. This plan to capture a wight and bring it back to King’s Landing, in order to unite the  six kingdoms feels a little bit…underdeveloped. Ignoring the actual practical difficulties of transporting a zombie a few thousand leagues down from the north, they are essentially suggesting an alliance of some kind with Cersei, which doesn’t seem like a very wise move. Unless there is an overwhelming attack by the Night King and the entire continent of Westeros experiences the horror of the coming war with the dead, she’s not someone Dany or Jon can turn their back on. It’s possible her new condition might help reign in some of her more sociopathic tendencies but something tells me this new bundle of joy is going to be something else entirely, perhaps a reaping of some of the karma she almost certainly has coming her way, for instance, how would she react to giving birth to, let’s say, a dwarf? 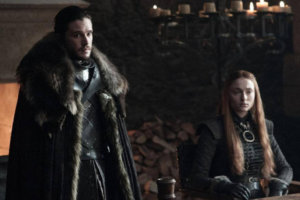 The new dynamic between Arya and Sansa is what is most exciting and foreboding about the season so far, because this is the kind of suspense that Game of Thrones used to trade on. The behind the scenes manipulations, the treachery and deception, it’s great to see the show eschew some of the spectacle for substance again, however, it’s also terrifying because we love Arya and Sansa has come so far at this point, we want to see what kind of a leader she is capable of being without it involving the two of them betraying either each other or Jon. Littlefinger is absolutely up to no good and this season he is ripe for another big move, this time a less heroic one than showing up at the last minute with the Knights of the Veil. No, Petyr Baelish is not a good guy, he’s the one who put a knife to Ned Stark’s throat in the first season, he’s the one who sold Sansa to Ramsay, and he’s going to show his true colors by the end of this year and it’s going to be a Stark sister who pays the price for allowing him to continue to skulk around Winterfell.

Well, that’s all for now. A few side notes, it’s nice to see Jorah back in the mix but he needs to stop making those weird eyes at Khaleesi. He didn’t have a shot before and now that he’s all scarred up from having a terminal wasting disease, I don’t think Dany is going to be into you, old guy. No offense. I’m also not counting on him returning from their little hunting expedition in the North. Gendry, either. Sorry, bro, you should have done some grinding first or a few PUGs, you are in pretty tough company. Next week looks like it’s going to be a real corker, with the previews appearing to show Jon and company surrounded by the dead on an icy tundra, although I’m sure there is going to be some thrilling last second rescue or escape because there is one thing Game of Thrones has been building to and still owes us: true love. The sparks are real and although they come from different worlds and different backgrounds, you can’t stop destiny. What? Jon and Dany? Sure, whatever. I’m talking about Tormund. And the Big Woman. Beric, you better mean business. 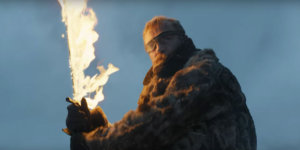