All right, kiddies, time to gather ’round the campfire and snuggle up next to your favorite teddy bear. No need to push I say, there’s plenty of room for everyone. Yes, even for that freckled kid who reeks of cheap perfume and swears he doesn’t eat his own boogers. But we all know he does. We’ve seen him do it. And we’re ashamed. Anywho, the team here at Monkeygoose just put a whole bunch of marshmallows to roast, the hot chocolate is simmering, and ol’ Uncle Luis is good and ready to regurgitate upon you another top 10 list of films. Don’t worry, I brushed my teeth and I haven’t touched a lick of booze since New Years.

Warning: I will spoil the crap out of these movies. 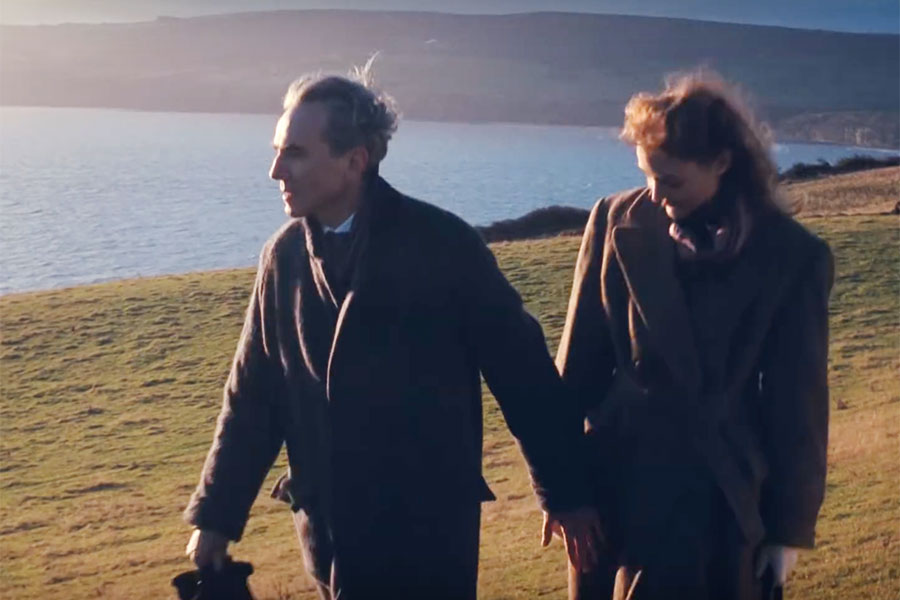 10. Phantom Thread
2017 was the year that Daniel Day Lewis tried to wrangle as many acting accolades as humanly possible by announcing that his next performance would also be his last. Of course, he didn’t count on Sir Gary Oldman of Britain to put on a whole bunch of fat guy makeup and give academy members a thespian boner, but truthfully nobody saw that one coming. Mr. Lewis, arguably the greatest actor that’s ever lived, has once again teamed up with fellow master craftsman PT Anderson and made Phantom Thread, a film about love, emotional abuse, and 1950’s post-war glamour that will make you question every single bowl of soup that your significant other puts in front of you. It is an extraordinary performance for sure, but the true standout of this film is relative newcomer Vicki Krieps, who delivers a powerhouse performance as the renowned dressmaker’s latest unhealthy obsession. They are dynamite together as two souls that yearn for the comfort of the other, yet are unable to walk away from a truly frightening liaison. Phantom Thread, at once deeply romantic and deeply disturbing, serves as a fantastic swan song for the celebrated Mr. Lewis. And so a merry tip of the hat to you, old chap. We will proudly hang up your jersey in the rafters. 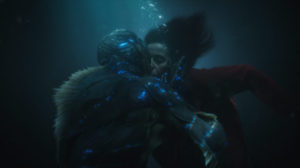 9. The Shape of Water
2017 was the year that Guillermo Del Toro set up the Creature from the Black Lagoon on a tinder date with Sally Hawkins. Ridiculous, right? Not necessarily. See, this Creature here is quite the charmer. He’s a quick learner, he’s good with cats, and not to mention his fingertips are infused with heavy concentrations of Rogaine. What a guy! Plus he has a hidden penis that gets a pretty good workout by the end of this film. Not bad for a dude with a severe case of trimethylaminuria. They just don’t make violent, heartwarming fairy tales like this anymore. 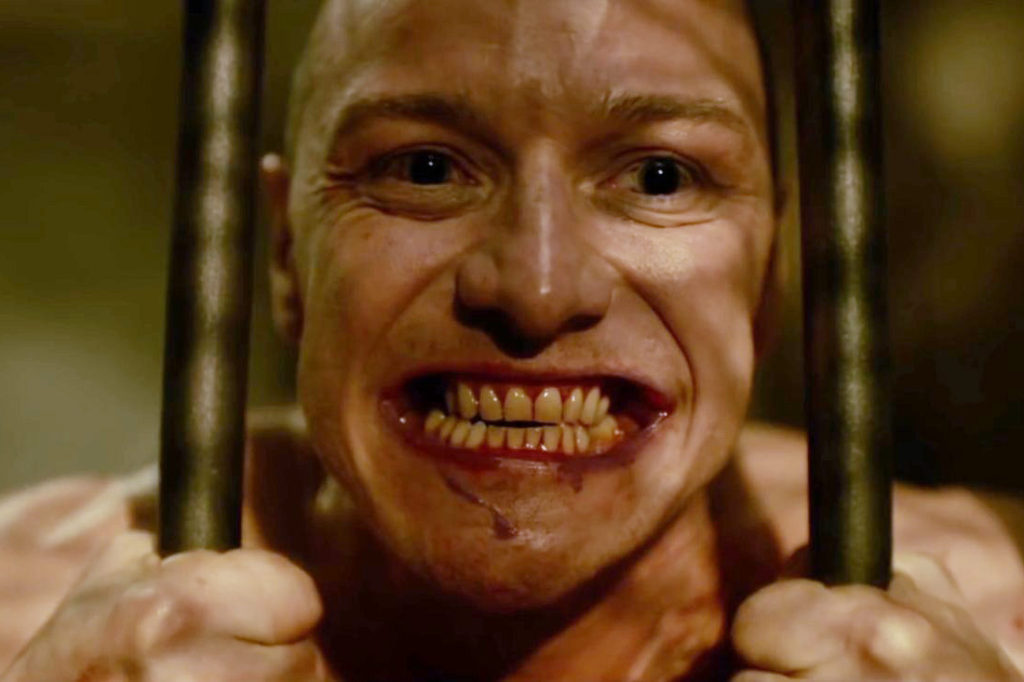 8. Split
2017 was the year that M. Night Shyamalan stopped trying to make pretentious gobbledygook (remember those killer plants from a few years ago!?) and embraced his inner longing for well crafted schlock. Yep, that’s right folks, Split is fantastic. What a twist! It’s a damn shame that James McAvoy ain’t getting much of an awards push for his fantastic turn as a schizophrenic misfit who cycles through 23 distinct personalities. He only really gets to use about 6 of them to full thematic effect, but one of them has the sweetest moves we’ve seen since the last time you googled “Everybody (Backstreet’s Back)”.

7. Raw
2017 was the year that posing as a cannibal became très chic once again, especially if your new-found taste for the taboo carries with it heavy metaphorical themes of teenage sexual awakening. Raw is a French horror film about a sheltered young woman who, while raised in a strict vegan family, soon discovers an uncontrollable appetite for human flesh during her first week at a veterinarian school. The shocks are shocking, the blood is crimson red and the revelations will make your stomach turn faster than your Ex’s homemade tuna casserole. Oh and it’s on Netflix so you don’t have any excuses. Go check it out. It goes well with a glass of Pinot Noir and a side of carrots. Bon Appetit. 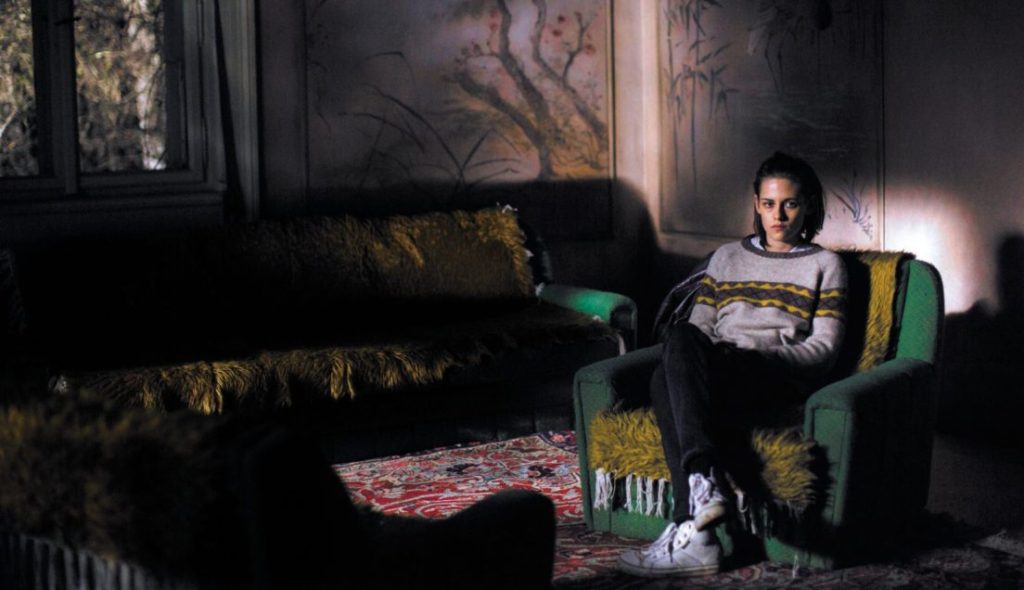 6. Personal Shopper
2017 was the year that Kristen Stewart made a ghost film set in the unlikely world of high fashion. And she’s incredible in it. Personal Shopper is a haunting meditation on love, acceptance and the transformative powers of grief. It has a lot in common with the best Hitchcockian thrillers, in that it plays with its characters’ perception of inward being and outward identity. Stewart is Maureen, a young medium living in Paris, who is desperately trying to communicate with her recently deceased twin brother. They were both born with the same genetic heart disorder, and so fearing their eventual death, the siblings make a promise to each other that no matter who dies first the surviving twin would try to make contact with the spirit world in order to prove that there’s truly life beyond the grave. Not before long, Maureen finds herself enveloped in a murder mystery that’s made all the more surreal when she soon starts receiving messages from a mysterious unknown source. It is a chilling circumstance that never gives you any easy answers. Personal Shopper will stick with you long after the credits have rolled. 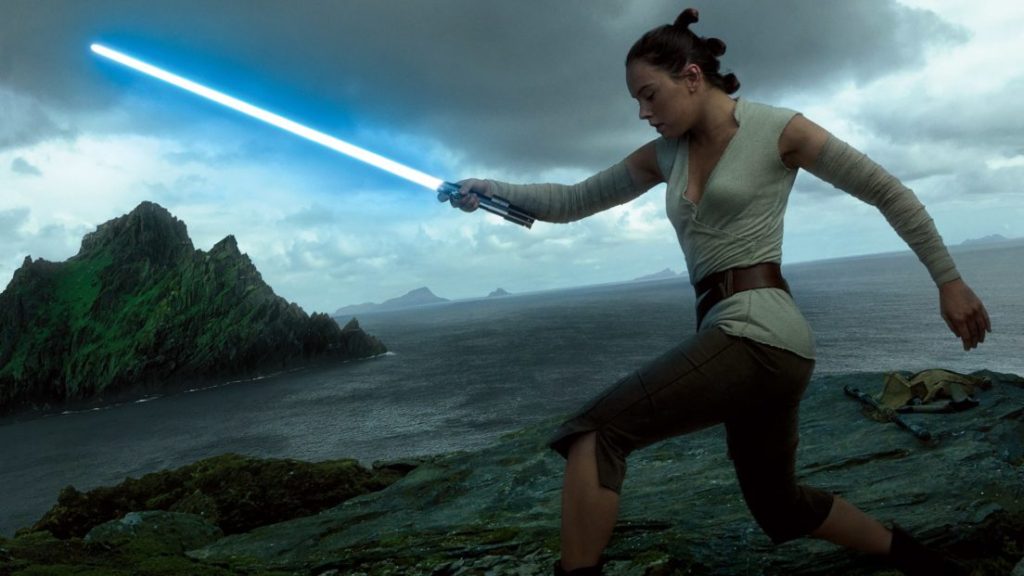 5. Star Wars: The Last Jedi
2017 was the year that lots of grown men cried, and squirmed, and shrieked, and roared, and squealed, and complained, and threw fits, and yelled at the screen, and waved their fists in disbelief, and then cried some more. All the belly ache culminated in the creation of an online petition to have The Last Jedi officially axed from the holy Star Wars canon. I signed said petition. And so should you. #notmyluke 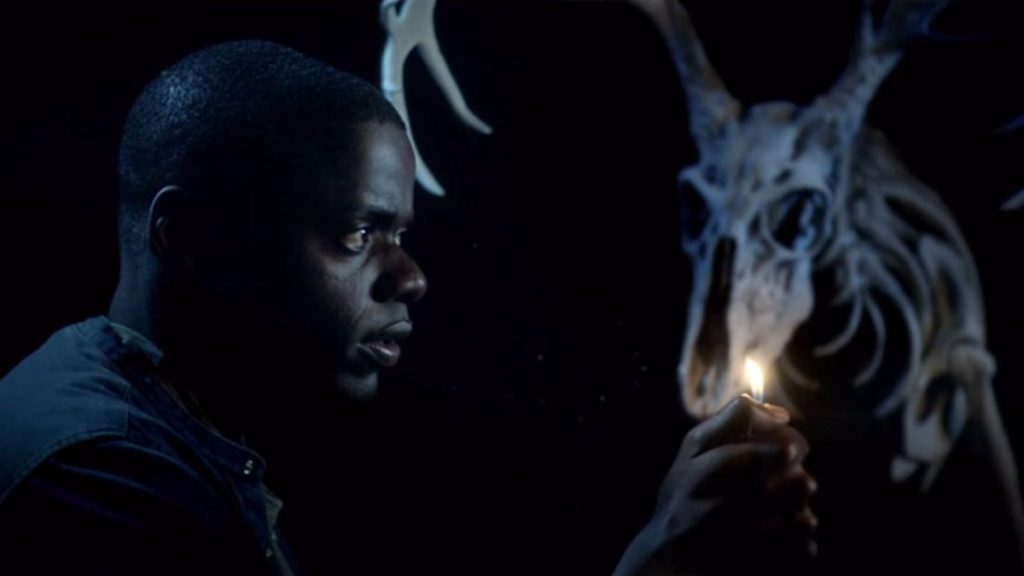 4. Get Out
2017 was the year that the dude who co-created that viral video about an inner-city substitute teacher and A-Aron made a movie about a black guy visiting his white girlfriend’s white family. And everybody went ape shit for it. But with good reason. Get Out is instantly iconic, frightening, and a damn good time at the movies. Come for the social/cultural commentary, stay for the deer antler fatalities. 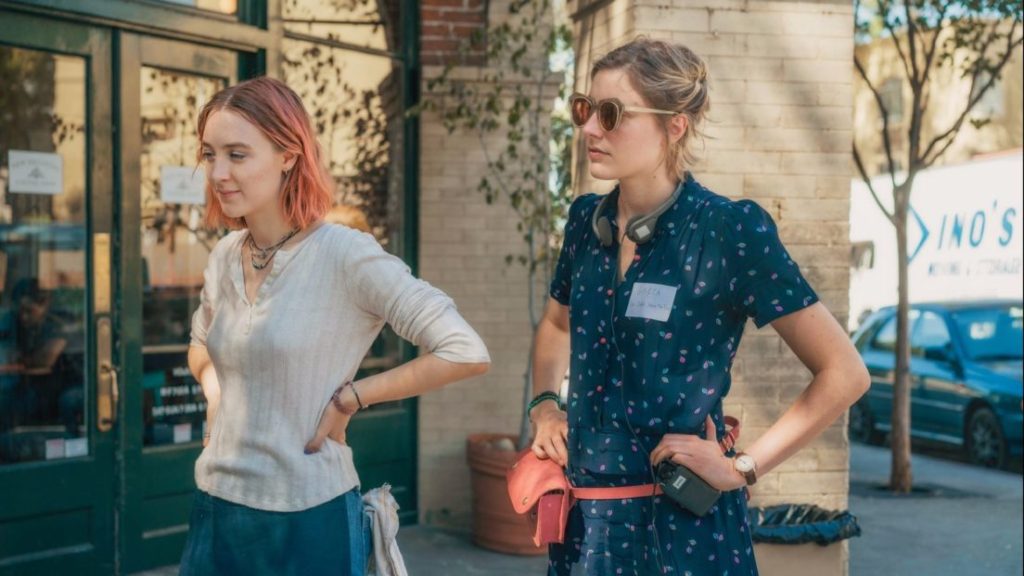 3. Lady Bird
2017 was the year that Greta Gerwig made the Dave Matthews Band relevant again. Not possible, you say? Just watch the film. Saoirse Ronan is fantastic, Laurie Metcalf deserves all the Oscars, and the city of Sacramento gets a heartfelt love letter that will make you swoon. Remember the first time you smiled at your teenage crush? How about your first time dealing with a broken heart? Did you forget how much it hurt that one time you yelled at your best friend and then having to walk away even though you wanted to hug them so much and say you were sorry? Ladybird will make you remember.

2. Blade Runner 2049
2017 was the year that Warner Bros. lost a bunch of money by making a sequel to Blade Runner, a film that crashed and burned back in 1982. On paper, this endeavor should’ve never worked. Blade Runner, as influential as it’s been since its release 35 years ago, never truly got over the general cult status hump. It is a movie often used by smarmy cinephiles to belittle others appreciation of the Sci-Fi genre. Yes, on paper this film shouldn’t have worked, which makes it all the more miraculous when it does! Blade Runner 2049 is a wondrous cinematic achievement. A pure expression of art and cinema intricately assembled into an amalgam of existential dread, corrupt ambition and awkward Replicant threesomes. It rattles you with questions of identity, it gives you the genius eye of master Roger Deakins, it bombards you with feats of design and engineering that would make even Elon Musk blush with envy. All the while weaving subtle hints of Hans Zimmer’s Inception score and the familiar expressions of Vangelis’ love theme from the original. It took Sir Ridley Scott seven different cuts to finally make his grumpy detective, Harrison Ford, sound less bored than usual. Denis Villeneuve needed only one. Hail to the Chief! 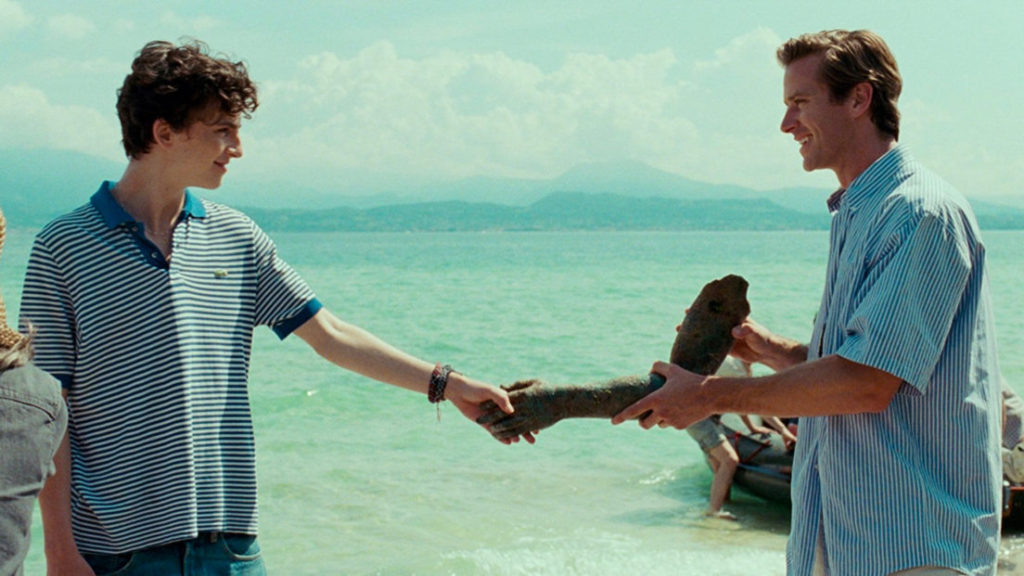 1. Call Me By Your Name
On a rainy afternoon while in his study, Mr. Perlman invites his son, Elio, to sit next to him for a chat. They’re both nervous and disarmed. Perhaps even unsure of the other. Elio, burning from the pangs of a recent heartbreak, approaches his father. His head lowered. Cautious. But open to listen. What follows is something I’ll never forget. It is a brief conversation, at once honest, arresting, hurtful and full of compassion. They are words that could only come from years of love, disappointment, and the pain of having to see your only son cope with uncertainty and affliction. In 2017 Michael Stuhlbarg broke my heart with his sincerity. In 2017 Timothée Chalamet broke my heart with his longing to connect with a fleeting first love. And if you’re open to it, this film will break your heart too. Call Me By Your Name is the masterpiece of 2017.

Luis Orlando Cordero
Luis lives in Brooklyn, NY. He writes movies, he watches movies, and he writes about movies. Recently, he bought a hair cutting kit cuz he wants to save money. He's never cut hair in his life. Wish him luck.