There’s a brief scene late in I, Tonya as Tonya Harding (Margot Robbie) prepares her makeup before her first free skate at the Lillehammer Olympics in 1994, and it’s incredible.

In it, Harding grits her teeth to aggressively apply dark red makeup, her demeanor and chosen color both reminiscent of the frequent physical abuse from both her mother (Allison Janney) and her husband-turned-ex-husband, Jeff Gillooly (Sebastian Stan). She then rubs the dark red streaks to spread them into an even rouge, just as she used makeup to hide the bruises throughout her young life. Perhaps these memories come back, because Harding begins to tear up. Or maybe it’s because her thoughts are with her skating rival, Nancy Kerrigan, who was attacked weeks before by a man hired by Gillooly. Or maybe it’s because she doesn’t recognize her own reflection, the product of a poor upbringing, a broken home, more comfortable with a hunting rifle than a tiara, but she must put on a happy face (literally, in this case) in order to do the only thing she’s ever been good at it. But her happy face looks more like an insane grimace, her eyes betraying the manic desire to look happy, the tears proof she’s not.

But she keeps trying, each pained smile less convincing than the one before it, because she knows it’s the only way they’ll let her win, if she can put on their costume and dance to their music and look pretty for them. She’s spent her life killing herself to get approval, from the judges, from her mother, from the public. From us.

Watch the 57-second clip. The first few seconds frame Margot Robbie in her makeup counter, essentially cutting the frame down to the same 4:3 aspect ratio (reminiscent of TV broadcasts in 1994) that the interspersed documentary-style interviews with modern-day Harding, Jeff Gillooly, and LaVona Harding are shot in. Just as those scenes allow Harding and Gillooly to give their hindsight commentary of the movie’s events, to plead their case direct-to-camera, Harding pleads hers here, to us, in her makeup chair. “Love me. Please.”

As is evident in the clip, Margot Robbie is brilliant as Harding, and the performances alone in I, Tonya are worth the price of admission — particularly from the Golden Globe-winning (and Oscar front runner) Allison Janney as the ruthless and foul-mouthed LaVona Harding. But the movie is also laugh-out-loud funny — often using humor to soften (but not belittle) the more depressing parts of Tonya’s life — and is a fascinating recontextualization of a story at the intersection of sports, crime, class, media frenzy, and late night jokes that many people think they already know. 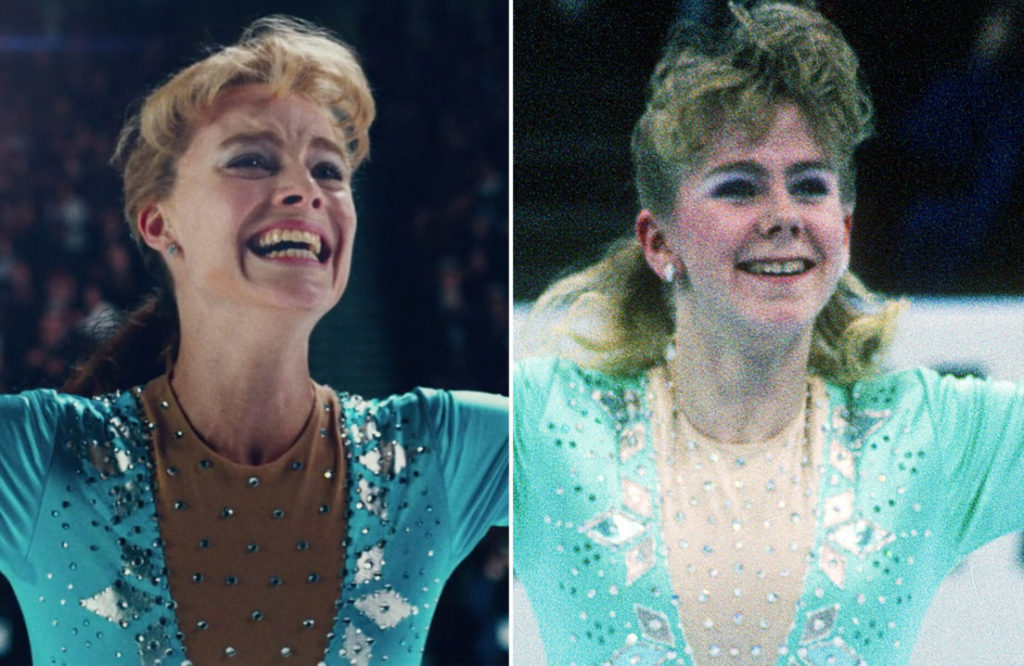 But it’s more than just that story; it’s the Tonya Harding story from toddler through 1994 Olympics and subsequent court case, the events of the latter relegated to the second half of the movie. The sometimes-conflicting accounts of Gillooly’s and Harding’s direct-to-camera interviews highlight the he-said-she-said circumstances of Harding’s role in the attack on Nancy Kerrigan. And yet, as people over the age of 30 probably remember, most people felt sure enough that Harding knew about or had something to do with it. Among I, Tonya’s observations about our culture is our natural tendency to think narratively, in terms of good guys and bad guys, in terms of opposing forces. And thus, Tonya Harding is painted a villain because of course we need villains in figure skating.

As compelling as the knee-bashing story is as the movie’s latter half, I was more interested in the first half of the movie, the biopic of Harding herself, a sympathetic portrait of a girl desperate to be loved but plagued by abuse and rejection. Pardon my tendency to think narratively, but Tonya Harding is a tragic hero, and the whole point of I,Tonya is to convince you it’s a tragedy, even before a girl gets her knee bashed.

I, Tonya is one of the best movies I saw in 2017 and one that Margot Robbie — whose production company, LuckyChap Entertainment, co-produced I, Tonya as their first release — should be very proud of. It’s a fine installment in the current 90s pop culture revisionism trend (which I am here for). Now I need to find my O.J.: Made in America to I,Tonya’s People vs O.J. Simpson.