Chicago, IL — How do you get things going at the United Center on a Saturday night? By exploding into your set with your hit “Get the Party Started” of course! Alecia Beth Moore, better known as Pink, completely packed the United Center two nights in a row on her Beautiful Trauma tour, bringing with her a cavalcade of dancers and musicians. In what can only be described as magical, the show had a multitude of colors straight out of Willy Wonka. 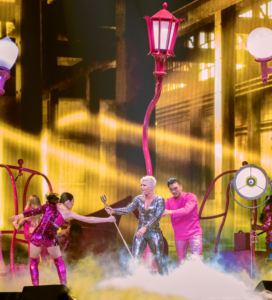 Starting the show off strong, Pink came in on a giant pink chandelier hanging high above the crowd. Tethered to a cable, Pink started with a full-on aerial acrobatics set. This wasn’t just a concert… It was a theatrical performance. The set design was absolutely mind-blowing! It contained everything from the massive chandelier to oversized lamp posts all set in front of a giant backdrop, that at times appeared to be a colossal warehouse. To top it off, while performing “Revenge,” Pink brought out a three-story high inflatable Eminem (with whom she shares the hit song). Around the halfway mark, Pink went full on flying Cirque du Soleil trapeze artist, jetting high above the crowd and then swooping back down into the crowd like an eagle catching a fish. When her feet were firmly planted on the ground and she was not dancing her ass off, Pink was interacting with the crowd as if playing in a small local venue.

The crowd was dancing, screaming, and literally jumping in their seats from the very first song to the very last (“Glitter in the Air”). At the end of the night, Pink broke into a completely rocking rendition of “Smells Like Teen Spirit,” which ended things on a high note. The fans were ecstatic! They came to see Pink perform and they were not left disappointed.

Pink’s tour will continue across North America until June. To find a date near you visit https://beautifultraumatour.com