In his original review in Variety, Todd McCarthy called the Coen brothers’ A Serious Man “the kind of picture you get to make after you’ve won an Oscar.” (Whether he was speaking in generalities about the Coens’ success or specifically about No Country for Old Men‘s Oscar sweep two years’ prior is unclear). Those who have seen A Serious Man no doubt get his meaning: the movie is personal, specific, and quite the head-scratcher, the movie you make after you’ve proven yourself and get to make whatever you want, marketability (and comprehensibility) be damned.

Wes Anderson already seems to make whatever he wants, given how idiosyncratic and eccentric his movies are (and have always been). But if ever there were a time where he’s proven himself and gets to make whatever-whatever he wants, surely it’s in his followup to the wildly successful Grand Budapest Hotel, which scored $174.8M at the box office (against a $25M budget), garnered the most Oscar nominations and wins of its year, and placed #21 on the BBC’s exhaustive and intimidating list of the 21st Century’s 100 greatest films.

And his follow-up to his biggest hit is…a peculiar film, even grading on the Wes Anderson curve. Given (presumed) carte blache to make anything, Anderson chose to make a stop-motion animated boy-and-his-dog adventure story — where the target audience’s POV is with the dog(s) far more than the boy(s) — with plenty of whimsy but also serious ideas about propaganda, political corruption, environmentalism, and loyalty.

Isle of Dogs takes place twenty years in the future, splitting time between the fictional Japanese city of Megasaki and the nearby “Trash Island” that becomes the eponymous Isle of Dogs (say that out loud a few times to get the joke, by the way). In the midst of a public panic about outbreaks of “Canine Flu” and “Snout Fever”, the corrupt Mayor Kobayashi (voiced in unsubtitled Japanese by co-writer and culture consultant Kunichi Nomura) quarantines all of Megasaki’s dogs to Trash Island, which is uninhabitable to humans due to volcanic activity and nuclear fallout. A tough former stray named Chief (voiced by Bryan Cranston’s gravelly growl) leads a pack of pampered former house dogs (voiced by Anderson regulars Ed Norton, Jeff Goldblum, Bill Murray, and Bob Balaban) through the post-apocalyptic trash-ridden hellscape, scrapping with other packs over bags of rotten apple cores and sardine bones and trying not to lose hope.

Chief’s worldview of self-reliance and his distaste for the pet/master social hierarchy are predictably at odds with the rest of his pack, and this contrast is brought to a head with the arrival of Atari (voiced in unsubtitled Japanese by Koyu Rankin), a 12-year-old boy who crashes a small prop-plane on Trash Island in search of his dog, Spots (voiced by Liev Schrieber). All the same, Chief reluctantly — ahem — embarks on a journey to find Spots with the Little Pilot.

Fans of Anderson’s oeuvre likely recognize some of his hallmarks right off the bat: characters on a journey (whether it be on the run or simply on the move), ideologically pure children softening hardened adults, and a gorgeously full and richly textured frame. That last one is probably the most consistent feature of Anderson’s filmography, and Isle of Dogs is first and foremost a visual triumph. The dogs are gorgeous and textured, frequently on display in tight close-ups. Some of the wide shots have so much going on in them that multiple viewings will be required to fully appreciate them (required multiple viewings being another Anderson hallmark, not just for the dense visuals but also because his jokes and emotional beats need more time to land than most, and land they do). The stop-motion form clearly caters to Anderson’s unparalleled meticulousness, and his second stop-motion film dazzles the eyes even more so than his first, the aptly titled Fantastic Mr. Fox, despite the beautiful fall foliage in the latter and the depressing urban garbagescape in the former (to say nothing of the PG-13 violence).

Another hallmark of Anderson’s films is that, beneath the pastels and affectations, they’re all about something beyond their plot; you can even trace certain thematic threads through most of his filmography (family, loss, forgiveness, etc). Part of the genius of The Grand Budapest Hotel is that it withholds its deeper meaning until the last possible moment, making the reveal that the silly, colorful movie you’ve spent 90 minutes with is actually about the rise of fascism (and, more importantly, what we lost to it) an even bigger punch to the gut than it otherwise would’ve been. Damn if it doesn’t make for an illuminating rewatch.

By contrast, Isle of Dogs wears its political allegory on its sleeve: from the misinformation propaganda campaigns about Canine Flu and Snout Fever, to the panicked public turning on the dogs, to the expulsion of the dogs from the city, to Mayor Kobayashi’s sham elections and militarized polic—er, dog catchers, to the silencing of dissenters, including and especially scientists. Sub out “dogs” for immigrants, Muslims, or any demonized minority group and it’s not difficult to connect the dots here.

To some extent, it’s a smart allegory on Anderson’s part, knowing full well that audiences instantly empathize with dogs in movies when given even the slightest reason to do so (see: every movie ever that features a dog, minus Cujo and…idk Ghostbusters?). As a failsafe, to make absolutely sure the audience empathizes with the dogs, they’re given American-English voices while all the Japanese characters speak in unsubtitled Japanese, either translated by an interpreter (voiced by Frances McDormand) or easy enough to understand from context. 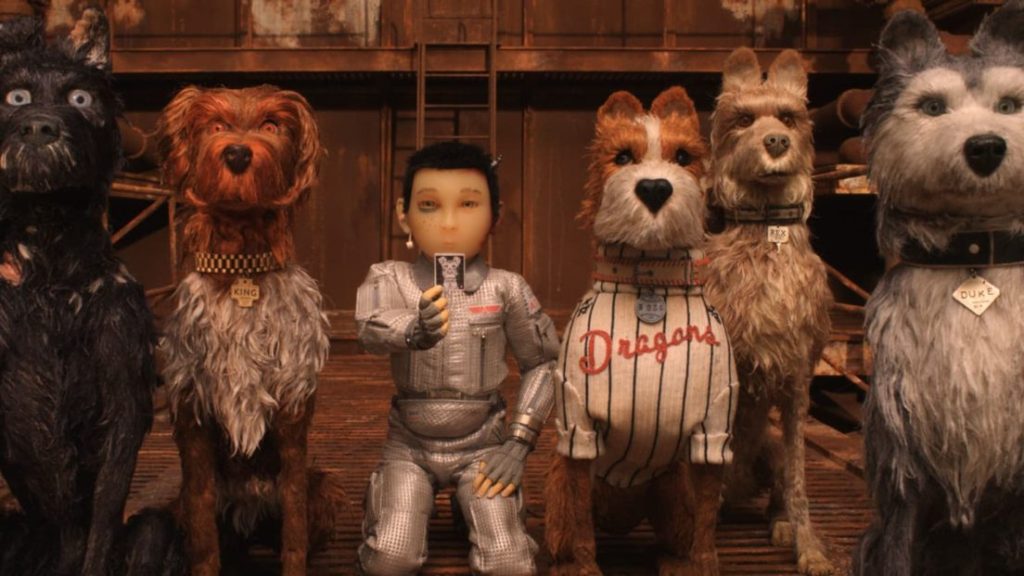 Which brings up the question*: why Japan?

[[*I’m on a crusade to end the common but patently incorrect use of the phrase “which begs the question” in place of “which raises/brings up/inspires/elicits the question”. Join me, won’t you?]]

With a filmmaker who can make just about any choice he wants (again, presumably), it’s interesting to examine the specific choices made. The dogs’ inability to understand the humans’ language reflects reality (duh), and the English-speaking audiences’ inability to understand the humans serves the narrative purpose of defining POV. We, like the dogs, can’t understand Atari. But that narrative purpose is served by any non-English language. There’s no other narrative reason  for the setting (as far as I could tell). The prologue backstory of Megasaki’s dogs and why Kobayashi doesn’t like them features samurais (kind of), there’s a few seconds of sumo wrestlers, and a character is poisoned via sushi; these could easily be replaced with equally shallow points-of-reference from any non-English-speaking country. This makes the specific choice to set the movie in Japan more pointed.

(I understand that Anderson is a big fan of Akira Kurosawa and Hayao Miyazaki, but did he have to do his homages to them in a movie that’s, in essence, an internment camp story?)

There’s already been plenty written on the appreciation vs appropriation line and where Isle of Dogs falls, and I encourage reading up on it. Justin Chang of the LA Times wrote a thoughtful and insightful review of the movie (as can be expected from Mr. Chang), including the following: “The dogs, for their part, all speak clear American English, which is ridiculous, charming and a little revealing. You can understand why a writer as distinctive as Anderson wouldn’t want his droll way with the English language to get lost in translation. But all these coy linguistic layers amount to their own form of marginalization, effectively reducing the hapless, unsuspecting people of Megasaki to foreigners in their own city.”

I certainly see his point. I also agree with his assessment that Tracey Walker (voiced by Greta Gerwig), a foreign exchange student and pro-dog resistance leader, is “unfortunate”. But for what it’s worth (probably not much) I wasn’t offended by Isle of Dogs (for his part, neither was Mr. Chang). I certainly found some choices a bit tone-deaf but the amount of time I spent tugging on my collar uncomfortably was far, far outweighed by the amount of time I spent thoroughly enjoying myself.

I haven’t said much in the way of what I thought of the movie, but the previous sentence is pretty much all I got. Wes Anderson fans (*raises hand*) pretty much know exactly what they’re getting every time out at this point and they’ll probably be pleased with what they get, per uzh. Parents who don’t realize it’s PG-13 and take their six-year-old to see will probably laugh a lot, cover their kids eyes once or twice, and might even be moved by the ending.

And Harvey Keitel howls. I’m willing to bet he thought they were going to edit in a real wolf howl in post, but no. The 78-year-old Keitel howls like a wolf. And it’s magical.