Photos and Article by: Andrew Kopanski

Boston, MA – It’s the second time in as many years that Boston has been visited by Seattle based Minus the Bear. It’s been a rough time for the band in the last few years, particularly with the loss of their longtime drummer, but it’s exciting to see them making a triumphant return. 2017 marked the release of their newest album in five years, the 2014 release Lost Loves being a collection of previously unreleased songs. It’s also the anniversary of their hit Planet of Ice which takes the namesake of this tour. It’s only fitting that the band returns to their origins with Suicide Squeeze Records.

Bears fans are no strangers to incredibly skilled drummers and the Coathangers fit in well as a companion. Stephanie Luke on drums alternates as lead vocals as well, belting out one power ballad after another. The Coathangers are crass, loud, and thoroughly entertaining. Both with their lyrics and stage presence, they’re in your face and unapologetic. 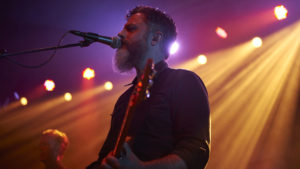 Joshua Sparks has tall shoes to fill as the band’s new drummer and he does it without missing a beat. This band isn’t about just one instrument though – it’s the mastery of everything at once. It’s about the seamless blending of everything together into something smooth and sexy. Their sound is unique, with sudden time shifts and the rhythmic fade between the electric instrumentation. Of course with this being an anniversary tour they played Planet of Ice in its entirety which is what many people came for. The house was full of dedicated fans, reminiscing about their favorite moments from concerts passed and how they first learned of the band.

The tour continues across the country, be sure to check them out when they come to a city near you