Cincinnati, OH – It’s the end of an era.  Slayer, the thrash metal band that captivated loyal fans through nearly four decades of rising riffs, raging lyrics and heart-pounding concerts, are making their way through their Final World Tour, along with an incredible supporting lineup: Lamb of God, Anthrax, Behemoth and Testament.   With a slate like that… be prepared to pump your fists and unleash some serious headbanging.

The stars were aligning for a special performance in Cincinnati.  First, the show was on June 6, 2018, which happened to be National Day of Slayer (started June 6, 2006, garnering the 6/6/6 date).  It was also lead singer Tom Araya’s 57th birthday.  And then, the conditions were about as perfect as you could get – a spectacular late-spring evening with a capacity crowd in the pavilion and on the lawn, loaded with fans waiting to experience their final Slayer concert.

First on stage was Testament, a Bay-area band with more than 30 years banging it out in the thrash metal circuit.  They have toured with all the greats in the metal industry and have a strong following.  They are currently promoting their 2016 Brotherhood of the Snake album, which peaked at number 9 on Billboard’s charts.  Their set spanned the years, beginning with the recent “Brotherhood of the Snake,” and concluding with “Over The Wall” from their 1986 first-release album, The Legacy.

Next, from Poland, was doom/extreme metal band Behemoth.  This band, with their post-apocalyptic make-up and costuming, brought a fierce energy to the stage, complete with deep guttural vocals from lead singer Adam Nergal Darski (“Nergal”), who worked the stage angrily, eyes piercing into the audience.  There’s a rage in their lyrics and performance, and it’s fascinating to experience.

Anthrax, who along with Slayer are members of The Big Four of thrash (Metallica and Megadeth rounding out the foursome), put on another solid performance.  In contrast with Behemoth’s fiery anger, the Anthrax set was intense, but less ferocious in delivery…lead singer Joey Belladonna even managed several smiles to the audience.

Lamb of God’s Randy Blythe brought his trademark fire to the stage.  Like a trapped animal, Blythe paced across the stage with an agitation that bordered on maniacal, staring intently into the crowd as if he needed to make his message very, very clear.  Occasionally, Blythe stopped to talk to the audience, and it was he who informed the crowd that this day was Araya’s birthday.  The crowd would not forget it.  Blythe continued to feed the fans their metal meal, and they ate it whole.

By the time Slayer hit the stage, the crowd was primed for the headliner.  Spurts of fire could be seen behind the curtain that obscured the stage while it was being prepped.  The curtain dropped to pyrotechnic fires flashing at the rear of the stage, and the band began slaying!  Tom Araya at lead vocals and bass, Kerry King on lead guitar, Gary Holt on guitar and Paul Bostaph on drums… commenced a storm of Slayer songs that had fists pumping in unison and not a soul sitting.  Araya’s vocals were delivered with a speed that would rival a seasoned auctioneer.  How does he do that?  King head-banged to the tenacious beat of song after song, and Gary Holt, sporting a “Kill The Kardashians” t-shirt, whipped his fingers through mind-shattering chords, looking straight into the audience and almost challenging them to move.

At one point, the stage lights darkened except for a lone spotlight on Araya, who quietly stared into the crowd, almost reflectively.  Each time he tried to speak, the crowd would shout out Happy Birthdays or “Slay-er!”  It took a while for enough silence to permit Araya to speak.  He said quietly how, at some point in life, one either reaps rewards, or paybacks.  “And, it’s important because…” he paused, then shouted “Paybacks are a bitch, man!” and the crowd exploded in cheers as the stage lights flooded the stage and the band burst into “Payback.”

After 19 thunderous songs, the lights dimmed on Slayer for the last time in Cincinnati.  Slayer is touring the US through August, then resuming their final tour in November through Europe.  Check out tour dates at: www.slayer.net.  Catch them while you can. 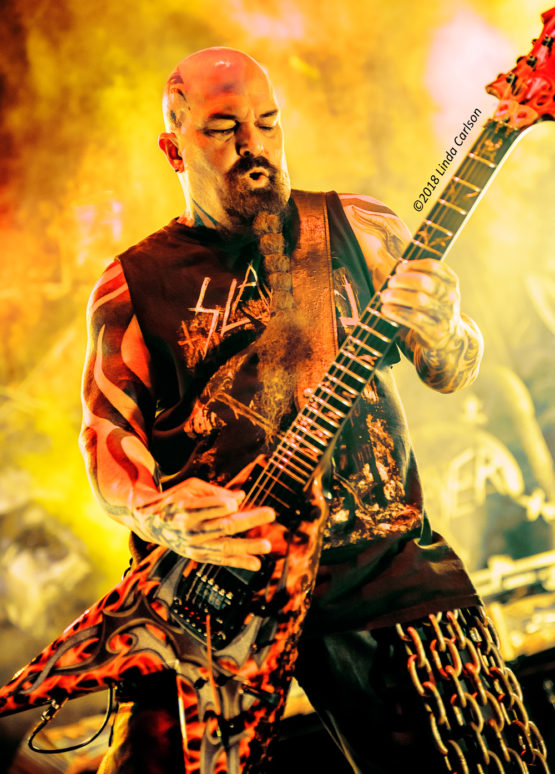 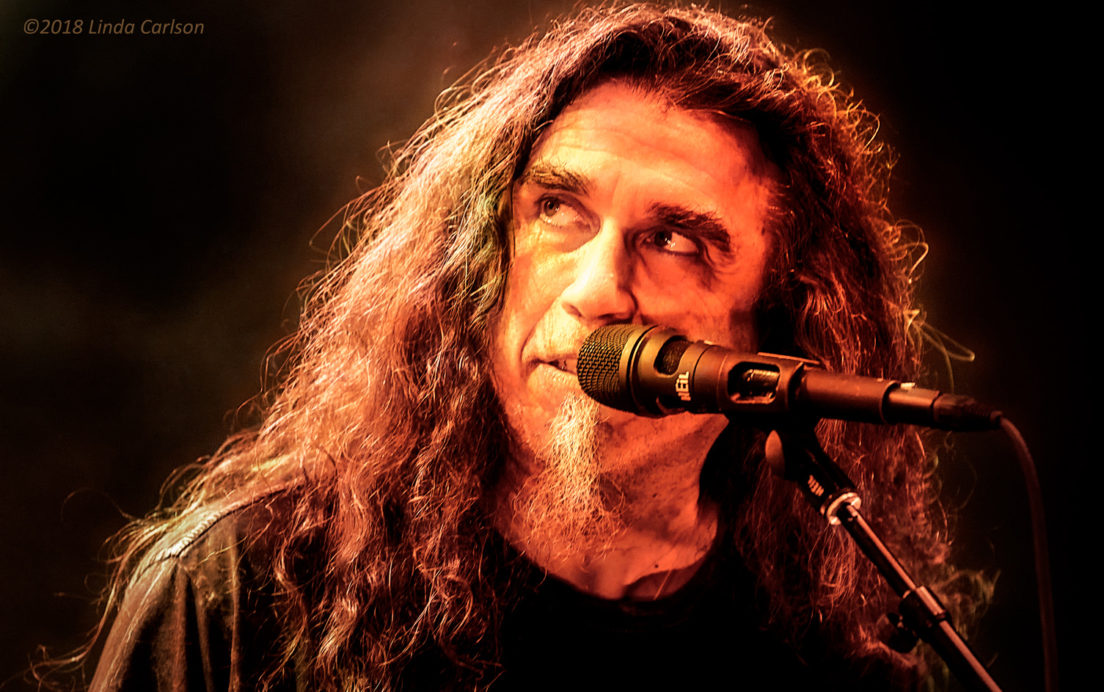 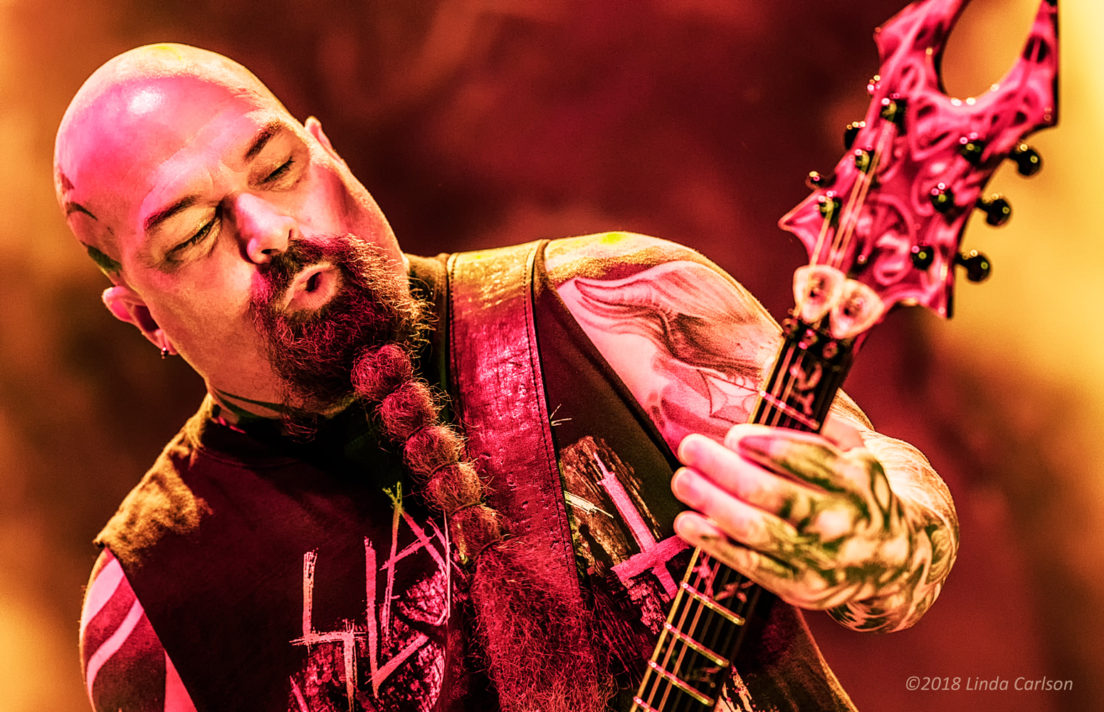 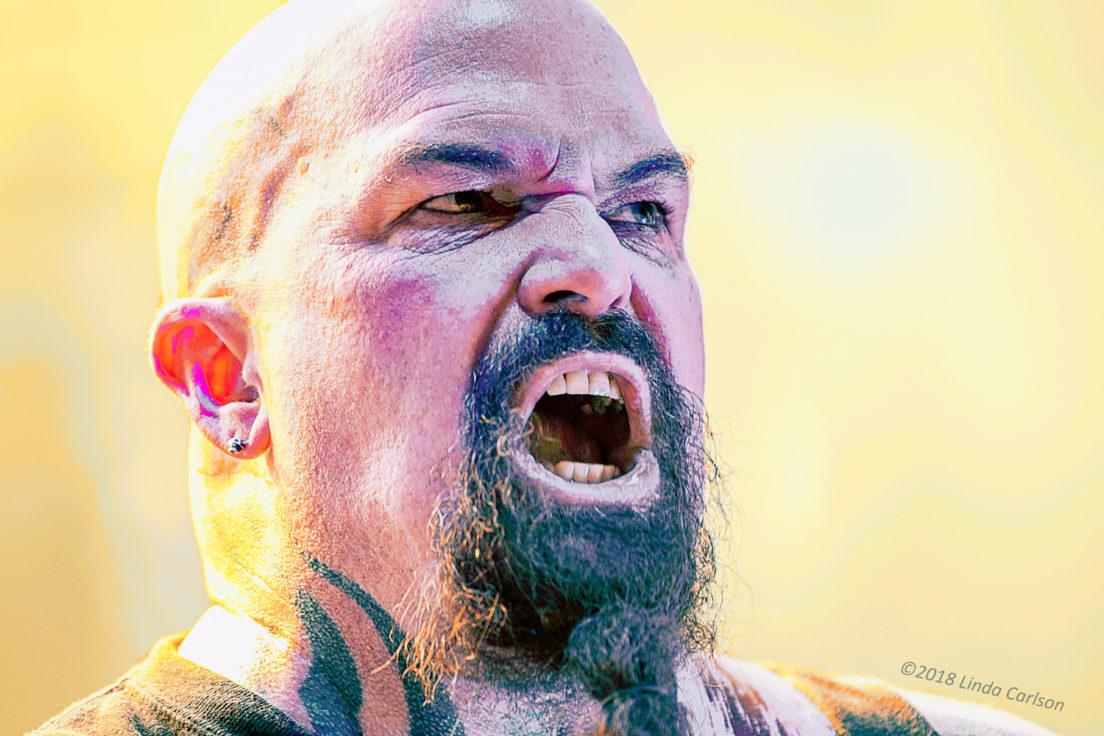 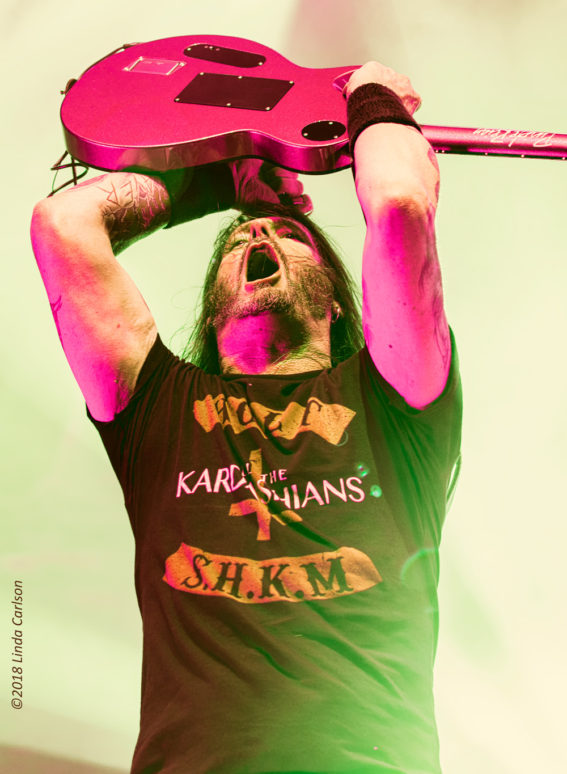 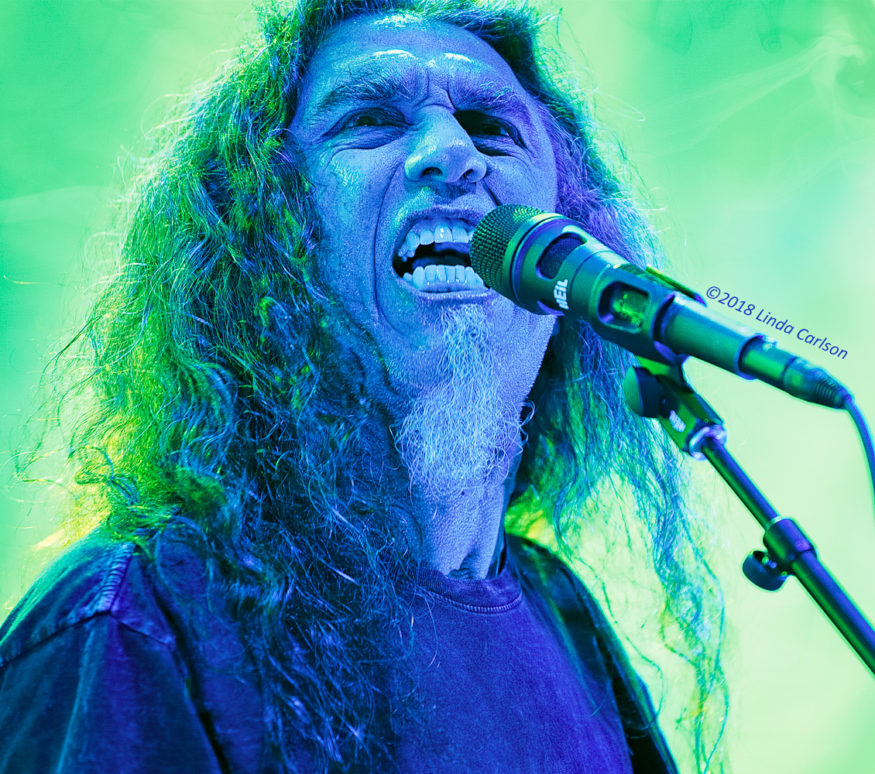 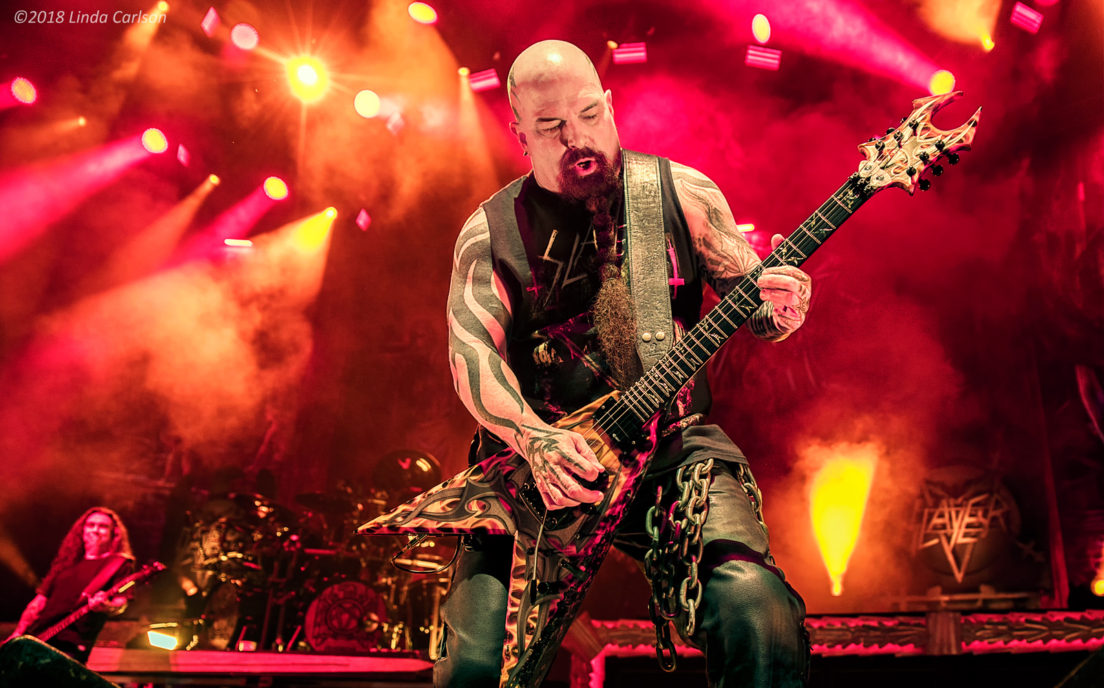 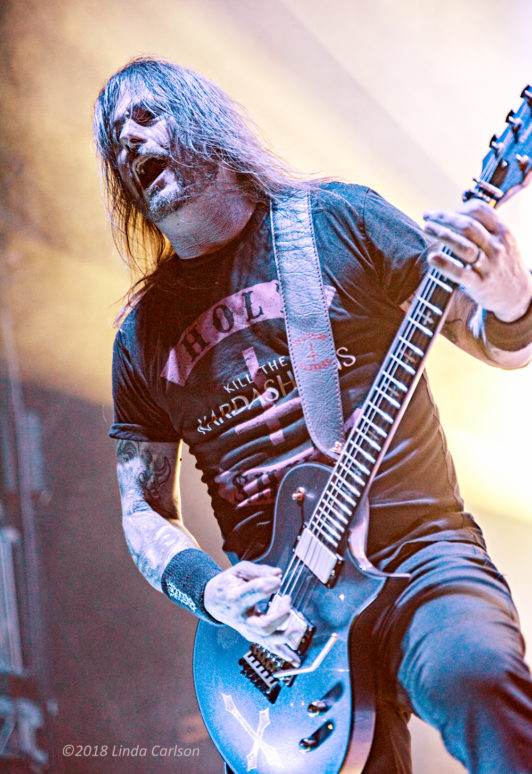 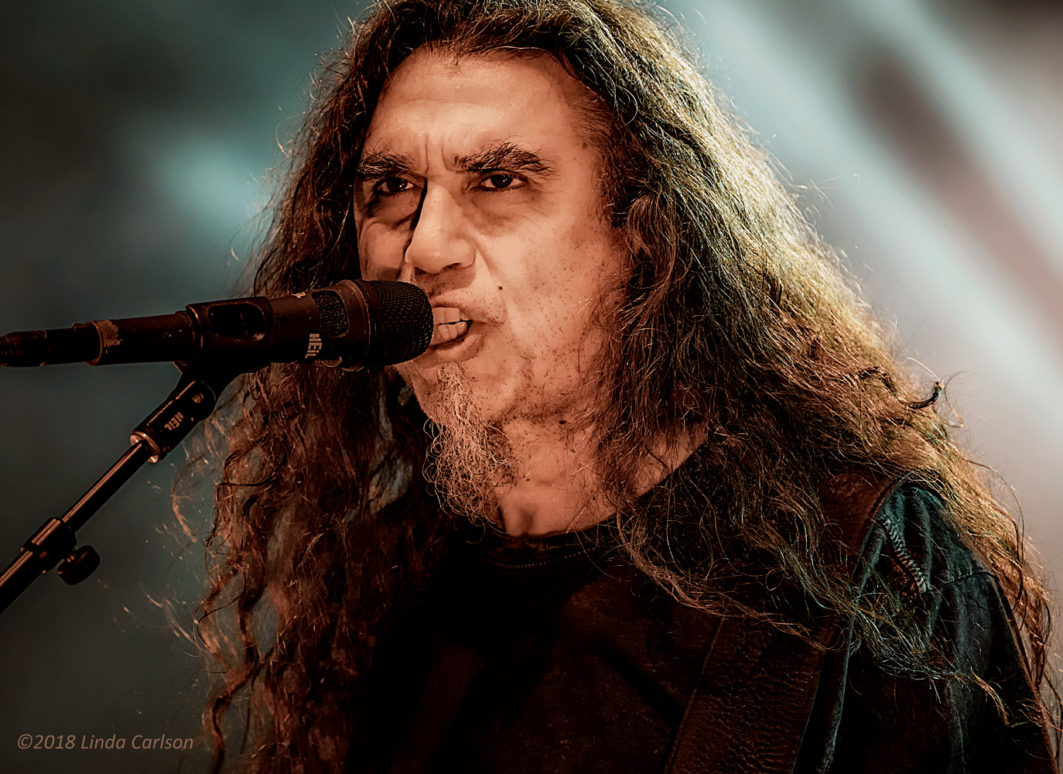 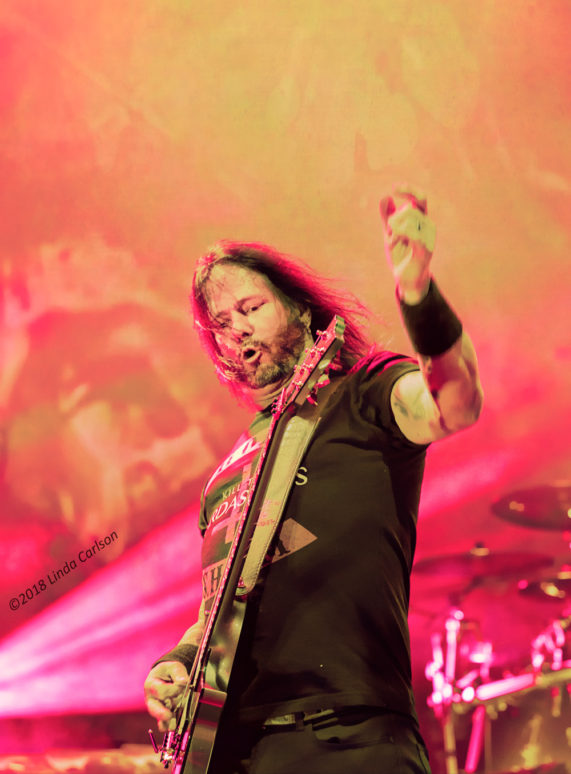 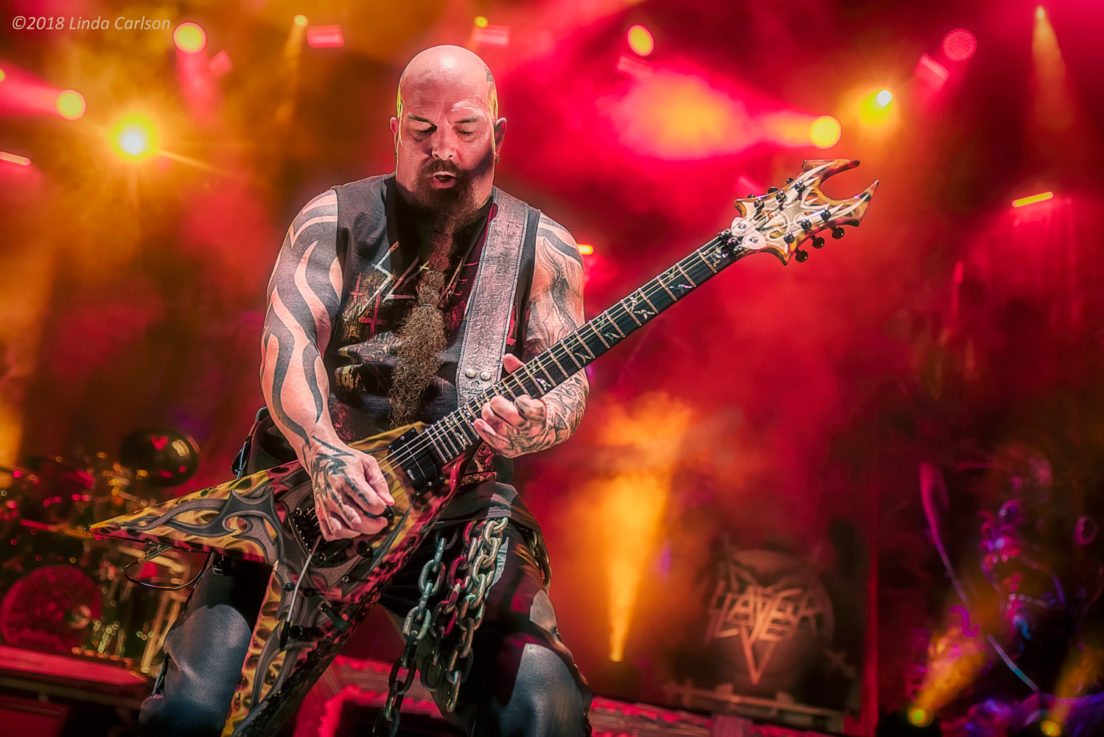 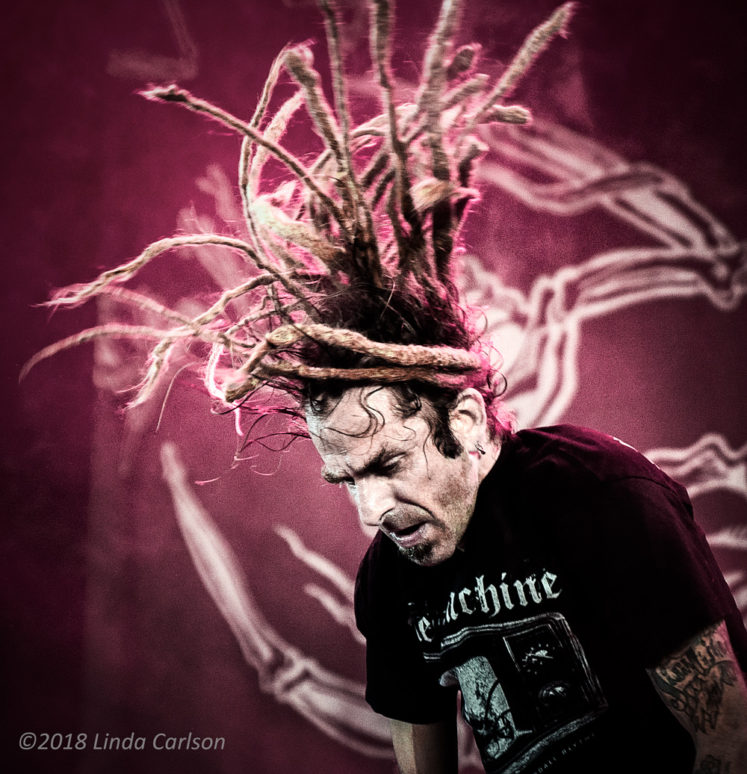 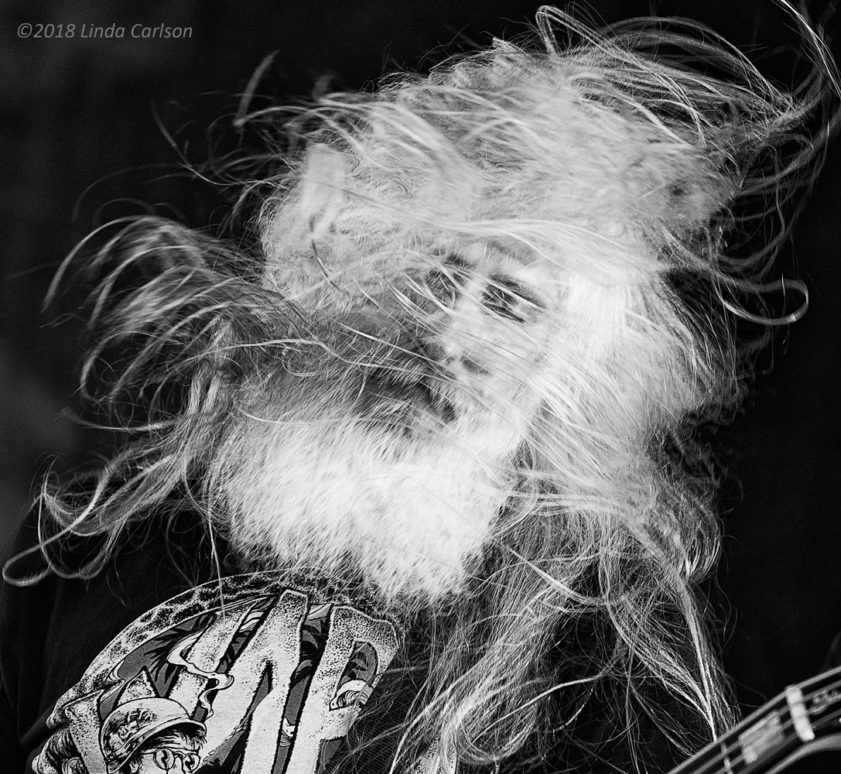 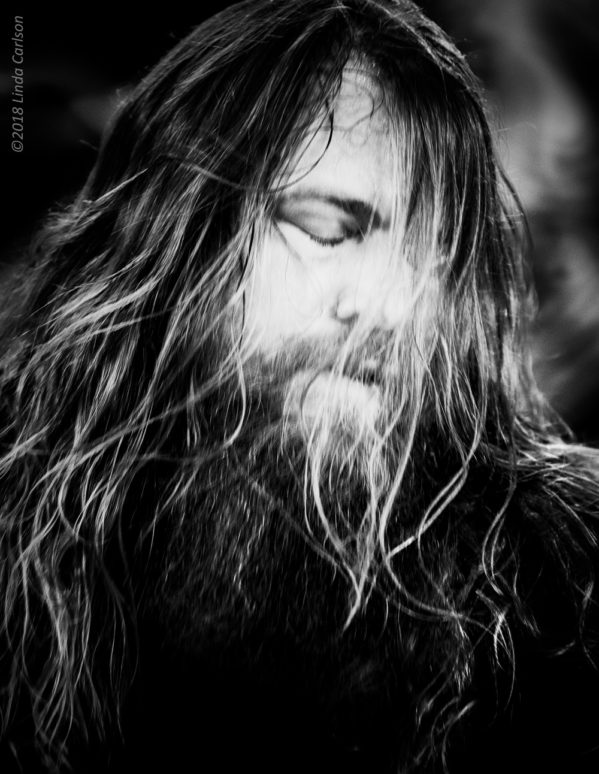 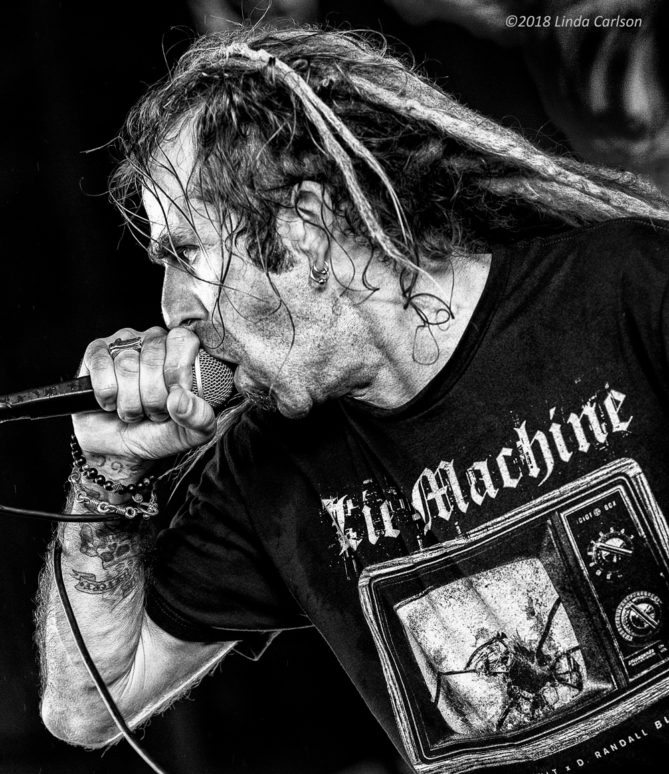 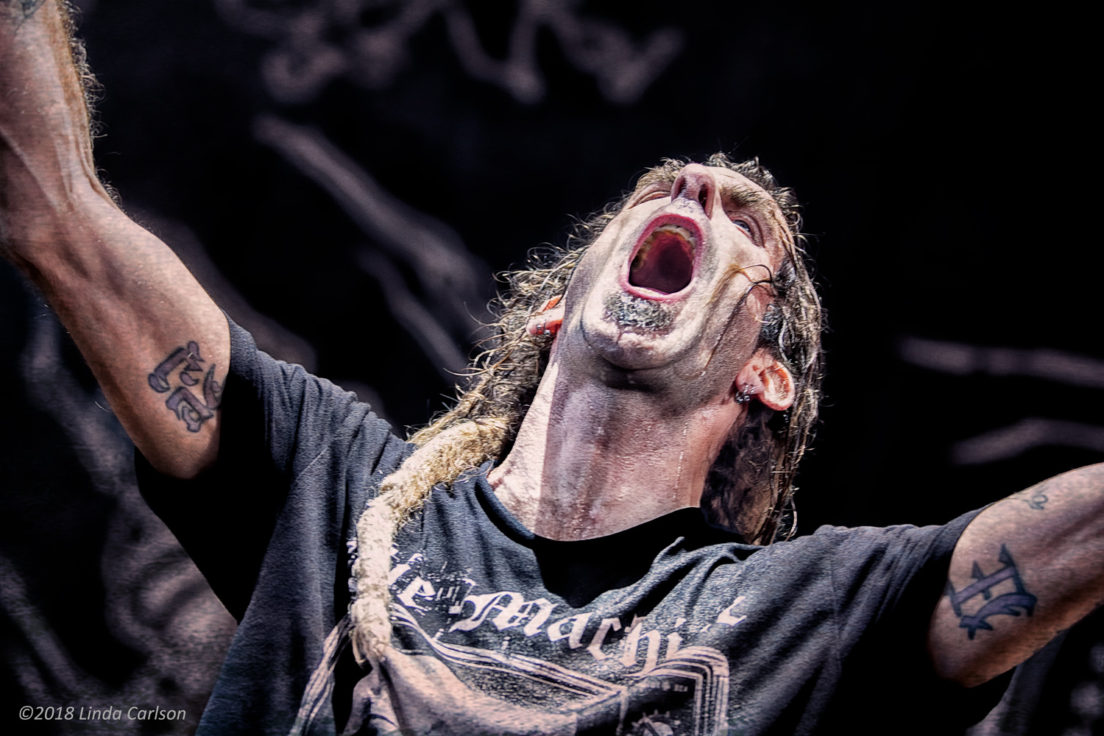 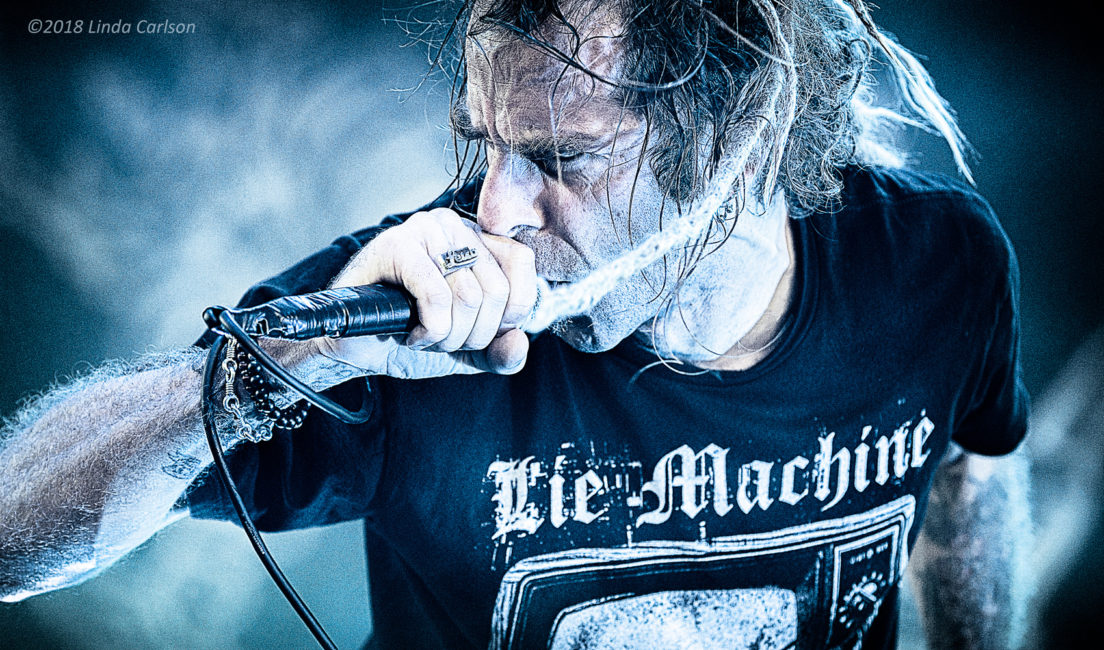 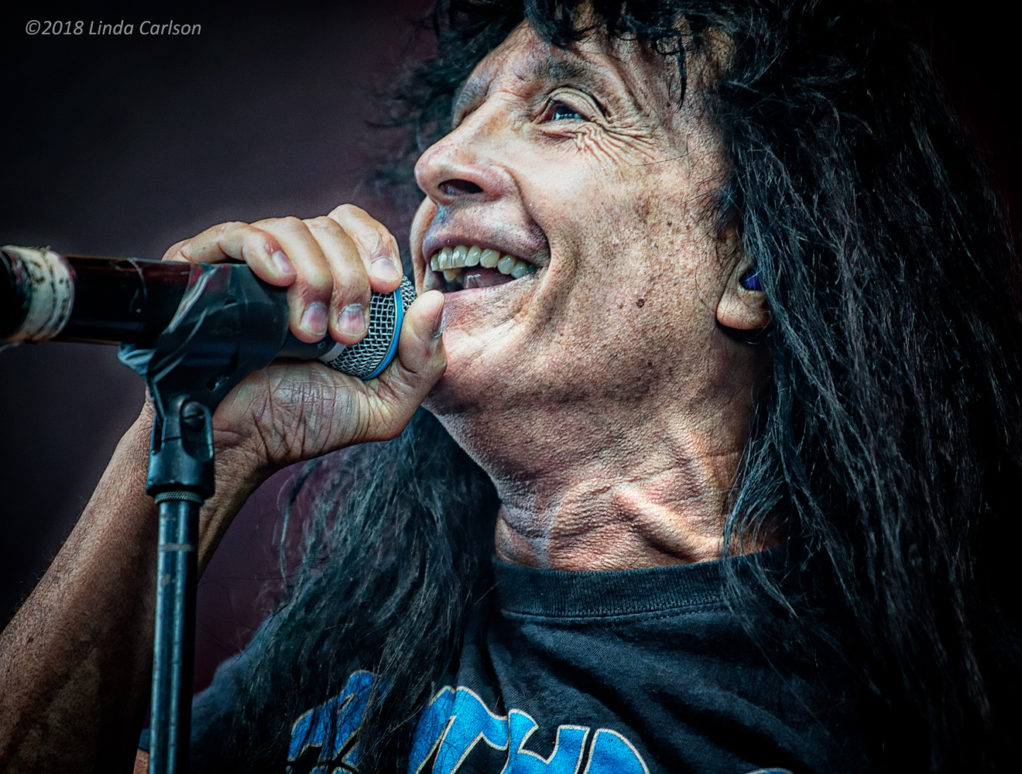 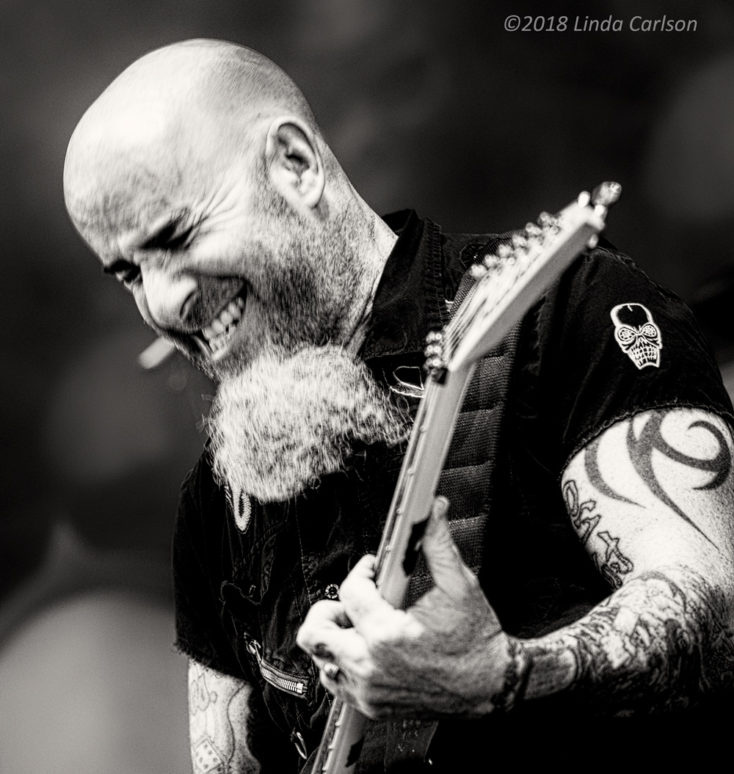 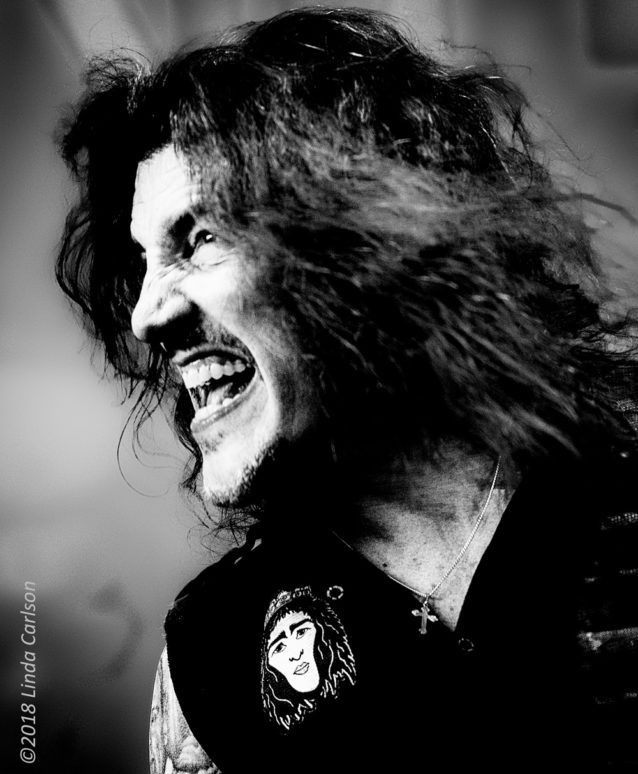