There’s the old saying that the early bird gets the worm. In the case of Burlington based Kill No Albatross, this means being a fairly new band to the Canadian scene, and yet they have already put out one EP (2017’s Lost in Darkness and Distance) with the upcoming Speak True Evil being their follow up. If this is any indication, they are not here to mess around and are eager to make an impact. Both EP’s set out to show their diversity and eclectic sound, however, Speak True Evil will leave the listener satiated with its blend of genres and expertly crafted flow. 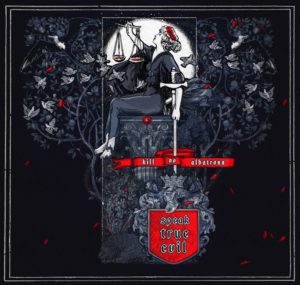 Kill No Albatross’ sophomore EP release begins with “Seven Tools,” a blend of beats and guitar work that incite one to begin dancing before taking on its rock vibe. The song is a great opener to the dynamism of the band, you can’t help but be energized by their work. With the inclusion of the power group chants to help embolden vocalist Kyle Collins, the track has the potential to be a rock radio staple.

Following the rock anthem of “Seven Tools,” is the gritty, hard-hitting “Apex Predator.” Showing off their more hard-core aspects, the song has all the makings of your standard anti-authority song. But then Kill No Albatross has given a cold shower in the form of “Sky on Fire.” Rather than keep the energy up, the band opts to bring it down and show off their ability to churn out an incredible power ballad.

For their grand finale, the band chooses to end their EP with a song titled “Void.” To the listener, this may seem a bit of an oxymoron, as the band has filled almost 15 minutes with an incredible amount of talent and genre-bending. The track entices the listener to go back to the beginning and witness how Kill No Albatross crafted their genre-defying release.

Kill No Albatross’s Speak No Evil is an ambitious display of technical prowess while maintaining the palatability of an everyman’s rock band. Their blend of emotions and atmospheres has been expertly crafted, thanks in part to the production done by Metalworks’ Wayne Cochrane (Alexisonfire, Protest the Hero) and mastering by Scott Lake (Cancer Bats, Dead and Divine), the band and their production team  are able to move the listener to a certain emotion be it introspective, aggressive, or simply joyful over the course of this EP.

Speak True Evil is a sign that rock’s not dead, it’s just gotten more diverse. You can get the EP July 13th here.