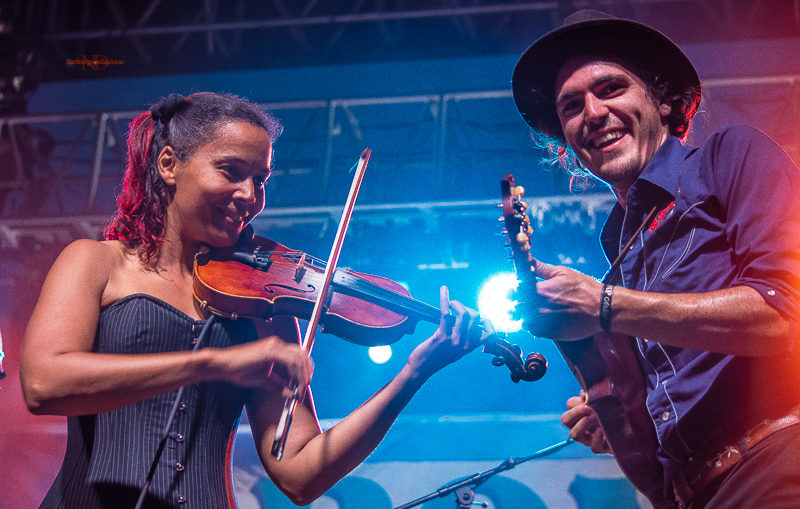 Owensboro, KY — Every summer for the past 15 years, a small, but beautiful park in northwestern Kentucky becomes a bluegrass music mecca for four days.

Spearheaded by the International Bluegrass Music Museum, also located in Owensboro, it is the premier musical event in the entire Ohio River Valley. A unique, utopian oasis in a desolate wasteland of radio wreckage and cliches. The closest sizable city in Kentucky to the hometown of one of Kentucky’s favorite sons: Mr. Bill Monroe. He is considered by many to be the father of bluegrass. However, ROMP doesn’t just celebrate strict bluegrass, it showcases musicians from all the veins and capalaries that claim a lineage to the main artery of bluegrass.

ROMP boasts most all the bells and whistles of every music festival out there, including people dressed like giant, eccentric muppets, and a focus on making the festival child friendly. It attracts a very diverse crowd, and most importantly, is packed with great musicians. This year, I was able to catch four of the headliners starting with Rhiannon Giddens.

Despite the thermoplastic fusing temperatures, Ms. Giddens was super cool. She melts down elements of blues, bluegrass, country and folk and presses it out into a dense, intense alloy of aural awesomeness. She moved, she grooved, and serenaded the crowd with her harmonious but dark voice. In between a great mixture of newer and traditional songs, she chided peace and harmony in this time of division.

Next up were the Travelin’ McCourys, pickin’ and singin’ like the good ol’ days. These guys definitely represent the more traditional side of bluegrass, but took the audience on an exciting musical journey nonetheless. High energy, low movement. Their posture is rigid, but their fingers and sound were a beautiful blur. No doubt they made the spirit of Mr. Monroe hoot and holler.

The following night brought the arrival of Alison Krauss. The woman and her voice scarcely needed introduction, standing there in the soupy heat like a mountain town Minerva, not a bead of sweat breaking the surface of her porcelain skin. As if perched on the side of the Grand Canyon or standing in the majesty of Denali, the audience was entranced in a reflective elation from the point her voice started to when it ceased. She played many of the favorites from the Oh Brother, Where Art Thou? soundtrack and turned Saturday night into a slow dancing, lucid dream.

Taking the stage after, was the ideal antithesis: Sam Bush. A zany, colorful bird, Sam sprinted right out of the gate with tons of rythm and southern, sonic swagger. Sam and the band boasted a marriage of rock and bluegrass that was impossible not to dance to. Their cover of Robert Palmer’s “Sneaking Sally Through the Alley” was particularly funky. Drenched in sweat, Sam and the boys never missed a beat.

Regardless if you’re just passing through, or a devoted festie making the trip directly, be sure to put a big red pin in Owensboro, KY to join in the ROMP.