Chicago, IL — There is something distinctly different about Chicago’s Windy City Smokeout festival. Considering that it takes place in a city that has over ten major music festivals is no easy task. As with most music festivals, it incorporates food, beer, and bands, and actually focuses on all three almost equally, which helps makes this festival stand out from the rest. So let’s discuss those festival options… 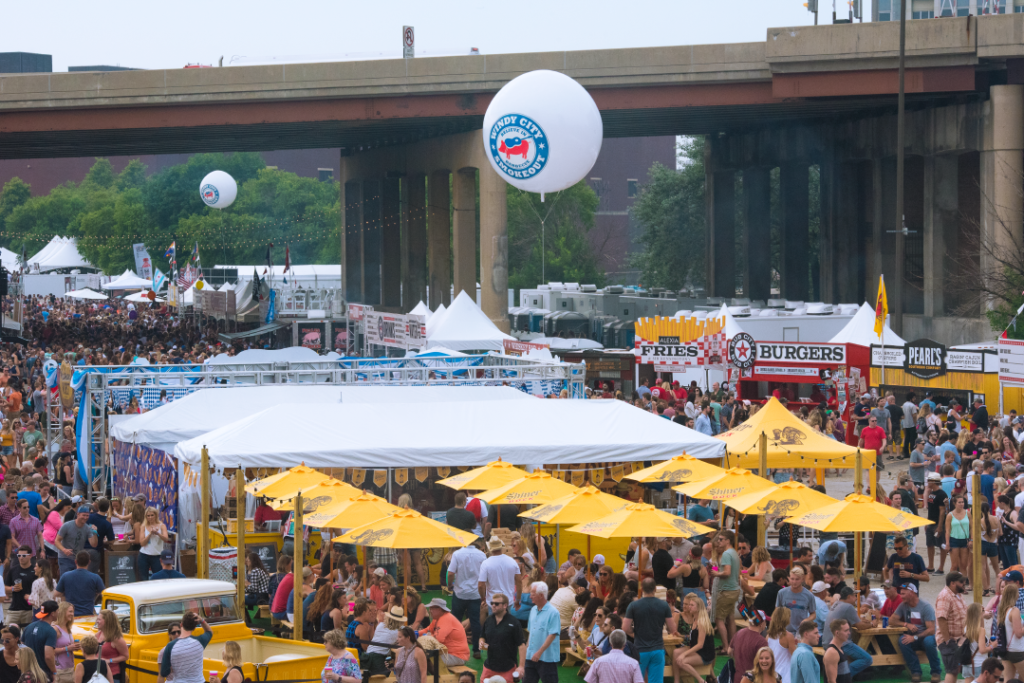 Beer — As soon as you walked in you were greeted with a city street length alley of icy cold goodness. This festival had over twenty-eight different breweries on site! Those numbers alone would make the die-hard beer lover drool. However, when you factor in that each brewery had two to three beers each, that gives you a total of over 60 different kinds of beers. Those numbers are unheard of at music festivals (Really, those numbers are unheard of outside of a beer fest!). They brought in a wide selection of beers as well. Everything from American Pale Ales, India Pale Ales, Pilsners, and Mango Whit beers. Basically, they had a beer for every discerning taste.

Bands — At Windy City Smokeout you get two different music stages. One stage is that large main stage that sees all of the bigger national acts. It saw smaller touring acts such as Renee Blair, Walker Hayes, Riley Green, and Alex Williams. Then as the night progressed it moved up to larger acts such as Kane Brown, Ashley Mcbryde, Aaron Lewis, and Turnpike Troubadours. With the finales being Brothers Osborne, Brett Eldridge, and Brett Young.

The smaller stage was nestled into the corner of the food court area. This stage while not as busy, offered a much more intimate setting to see up and coming acts such as Jimmy Allen, Reece Phillips, Andrew Duhon and Troy Cartwright. Being able to be close to the stage and really see what was going on was what made this stage so cool. The added bonus was that this stage actually had shaded areas which was perfect on a humid eighty-nine-degree day. Altogether the festival brought in a total of twenty-six bands over three nights.

BBQ — The food court area at this festival was massive and boasted over twenty different barbecue joints from all across the United States. Some of the standout places were Salt Lick with their smoked brisket, Ubons with their BBQ chicken, and Smoque with their smoked pork belly. While a majority of the restaurants were from the Southern states, only a few were from Chicago and New York. By the end of the festival, most of the stands had sold out of almost everything. But that didn’t stop the attendees from getting what they could. At one point people were just eating bowls of large chunks of smoked pork and going to other stands to get what remaining BBQ sauce was left to slather on their meat. For those that don’t eat pork or beef, there were options for them as well. Places such as Pearls Southern Comfort and Sir Kensington’s which were serving up oysters, crawfish, chicken, and lobster. Even still, if you didn’t any meat at all there were options such as Mac Shack (mac n cheese), Dino’s tacos (chips and guacamole), and Alexia french fries (artisanal fries).

All in all Windy City Smokeout was an all around good time. People left their politics and prejudices at the door. It was about people coming together for three days of good food, good drinks, and good music. With a record sell out crowd on Saturday and huge crowds the rest of the weekend, the Windy City Smokeout is guaranteed to see future success for many years to come.

To get an idea of all the festival has to offer you can view their website at http://windycitysmokeout.com