Norfolk, VA — Having lived in Georgia with its rich musical history attuned me to the plethora of talented bands that blossomed from the area. Ranging from hip hop/rap to alt rock and southern rock, I became a huge fan of The Black Crowes, among others like R.E.M., B-52s, Outkast and more. Keeping track of the development of the brothers Robinson as they traveled separately in artistic endeavors led to me following not one band, but two. What a pleasure it was to finally see Rich Robinson and company in his most recent project, The Magpie Salute. Currently at their two year anniversary, the release of debut album High Water 1 just last month solidified their presence on the scene. Formed with former members of The Black Crowes and from Rich Robinson’s past solo project, the music of The Magpie Salute is at times dreamy, Beatles-esque, soulful and introspective. Dynamic vocalist John Hogg hits right on the mark with an expressiveness and a sound reminiscent of passionate Lenny Kravitz. Keeping the stage set up simple with throw rugs and a banner, this is a band that puts musical creativity foremost in the formula… and it works beautifully. Listen to parts of the album here: 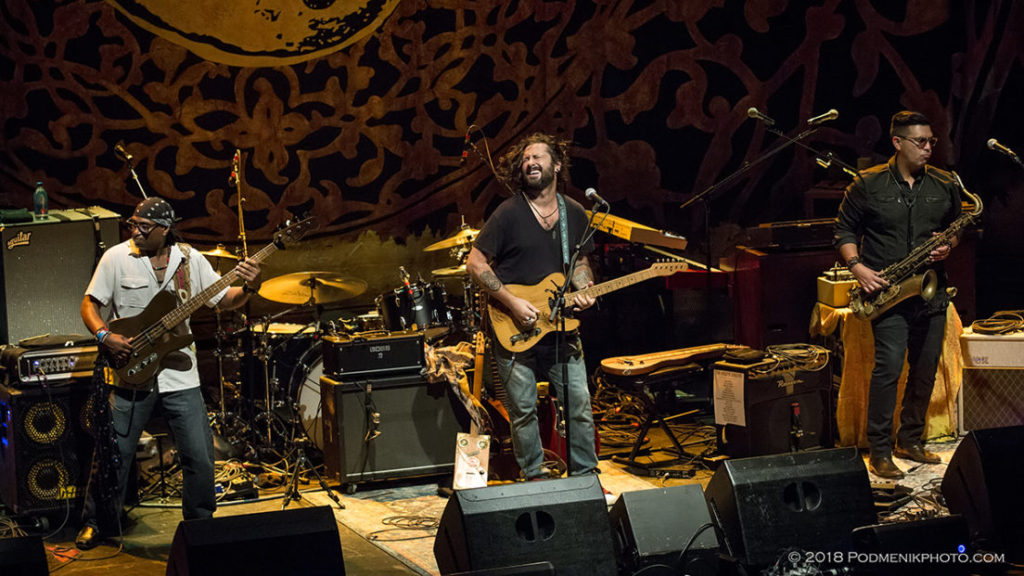 I have had the pride of knowing the opening local band Anthony and the Conqueroos for a few years now. Bluesy rock and a huge amount of talent and inspiration pour from frontman Anthony Rosano. Always holding true to his New York roots, he is complimented by Paul Warren on bass, Scott Smith on drums and multi-talented J.B. Bustillos playing sax and harp interchangeably on songs. With two studio albums under their belts and a slew of local music awards to include “Best Blues,” “Best Live Performer” and “Album of the Year” here in the Tidewater area, which boasts a population of nearly two million, Anthony and company are on a continuous track of growth upward and outward as they tear up the stage with infectious and irresistible energy.

Readers are encouraged to catch them on a smaller stage while you still can: https://www.conqueroos.com/home