Burnsville, MN — Last weekend after the first snowfall of the year covered the ground, Cane Hill and friends warmed everyone up at The Garage on their self-titled tour stop in Minnesota.

For this stacked line-up, we had two local Twin Cities opening bands. The first was the 3-piece mostly instrumental band Psychodelic. Their set was filled with thrash scale slides, deep and dark vocals, and a drummer that slayed his bass drum. From their rhythmic and heavy breakdowns to their chilled out guitar riffs, this band was a great starter to the evening. Following them was the band Agony Reigns, the second of the Minnesota local bands. This up and coming band had a full pit of fans wearing band merch and head banging along to their favorites songs. Though the band was younger in age, they carried a soulful and full sound to their vocals and musical composition. They closed out their set with a Metallica cover that got the whole room moving and rocking out. 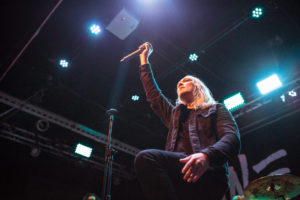 Next was the south Florida four piece metal rock band Afterlife. Entering onto the stage in all black attire, this band brings incredible energy to each and every performance with high kicks, dizzying spins, and full jumps all over the stage. Afterlife has its own unique sound coming from the mix of their vocalist’s haunting cleans paired perfectly by heavy bass drops that shake your sternum. The crowd continued to fill up throughout their set as the anticipation built for the headliner. 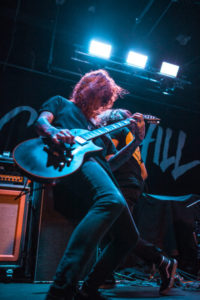 Our last opener for the evening was the hardcore, female led band from Baltimore, Maryland, Sharptooth. This five-piece band believes very passionately in standing up for social injustice, corruption, and hypocrisy in politics. Their album Clever Girl is changing the scene for females with their heavy vocals and powerful lyrics to encourage an inclusive environment within the scene for all, and to feel safe and welcomed. This is a ground breaking and motivated band to watch out for in the next year, and I believe their high level of performance will take them far! 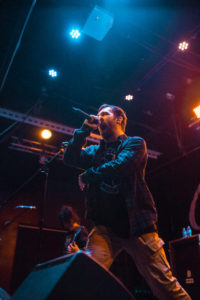 Finally we have our headliner for the evening, a nu metal band from New Orleans, Cane Hill. You can see why this heavy rock band is signed to Rise Records right away with their opening fan favorite “Lord of Flies.” If there was anyone in the audience that was still thawing from the weather outside, they were fully warmed by the end of this moving and head banging set. This bands high energy, mesmerizing vocals and captivating performance was sure to make new fans for any first timers. Do not miss this tour if it comes thru your area!

For tour information and tickets: http://www.wearecanehill.com/