When you think of the idea of an ‘erotic web cam girl’ you probably have many preconceived notions and nearly all of them might very well be wrong. Many personalities comprise women who cam for money on the internet, and although it can be an innocent venture, it’s not without its consequences and stereotypes. Cam is a new film that will be available on Netflix soon, that was written by a former cam girl named Isa Mazzei, and starring Madeline Brewer as Alice/Lola as the innocent cam girl who encounters an otherworldly problem that will challenge everything she knows about her profession.

Alice has an alternate identity. By day, she is a typical young millennial, comes from a good family, has a teenage brother she’s close to and a mother who looks out for her. By night she is Lola, a cam girl on a meteoric rise on a free web cam site and she has a loyal band of adoring fans who shower her with encouragement and gifts of all kinds. She maintains a relationship with a few of them, but lives by a certain set of rules to ensure her safety. She never gives out her address, she never fakes her orgasms, and she never tells her guys that she loves them. These rules manage to keep her safe, that is, until she finally gets to the “Top 50” on her site. 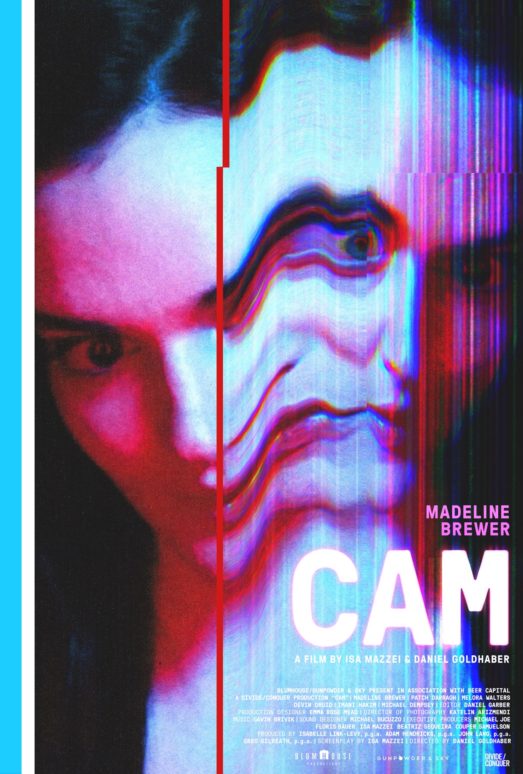 It would have been nice if there was more depth to the story because Alice’s character is extremely well written and Madeline Brewer was turning in a more than good enough performance that could have had her carry a longer film. What’s missing from this story is an explanation of the supernatural element. What Cam does do well is fully explore what it’s like to be an erotic web cam girl. There isn’t one box you can put a cam girl in. There are fully nude ones, some that are non-nude, some that play games with their viewers, some that collaborate with other girls. In the end, mostly they are people who want to express themselves in a specific way and no matter what it is that you’re into as a viewer, there will be a safe and innocent way to view it. It’s a cohesive business transaction that shouldn’t be considered ‘sex work’, yet it will always have that stigma. The writer Isa Mazzei does a great job of incorporating a supernatural element to this when she could have easily just had the inciting incident be some kind of deranged stalker and led the story from there, but that would have done a disservice to this profession instead of shining a light on it in an entertaining horror film.

Cam will be available on Netflix soon, and it is a slick horror thriller that many audiences will enjoy. It’s sexy without being too male-gazey, and bolstered by great writing and a great lead performance. It’s a strong writing debut for Isa Mazzei, and should be a star empowering performance for Madeline Brewer. Once this is available, be sure to have it on your radar.