Chicago, IL — At just 18 years old Petit Biscuit, aka Mehdi Benjelloun, is in many ways very similar to other teenage boys of his age. What separates him from the pack is that not only is he member of the successful indie/pop duo Mount Dreams, but he also has an incredible solo career as a DJ/ producer under the Petit Biscuit moniker. Born in France, Mehdi was raised by a Moroccan father and French Mother. At a young age he started to learn various instruments and was taught to play and appreciate classical music. It’s this love of classical flowing arrangements that allowed Mehdi to transition his appreciation of traditional music to his passion for electronic music. The ability to create so many different sounds in electronica while still using classical composure paved the way for his career. 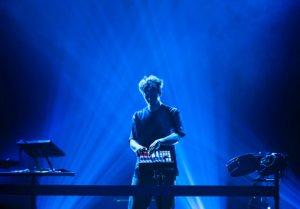 Arriving at the venue I notice that I’m probably one of the older people in the crowd by a good five years or so. This is probably a good sign. Many of today’s youth have their fingers on the pulse of new and upcoming artists thanks to the ever popular social media. The lights start to dim and then fade to complete blackness. It’s stays dark for what feels like a minute. Then music starts to play and a giant projection screen shows what appears to be a sun coming out of a total eclipse while at the same time revealing a silhouette of Petit Biscuit standing on stage. This is the beginning of an hour and a half journey through a musical and visual nirvana. The music can only be best described as an auditory odyssey. The visuals were completely out of this world with graphics that only emphasized the musics sensational potency. Personally I have been to over a thousand electronic shows in my day and I have to say that the visuals combined with the music, rank up there with some of the best I’ve seen. This fact is important because Petit Biscuit isn’t a fully recognized household name just yet. With the advantages of being able to find new music on social media also comes the disadvantages of having so many new artists peddling their music. It’s these extra steps of composing the music to stunning visuals that really sets the bar and separates the professionals from the amateurs.

It’s my belief that Petit Biscuit has a blossoming career ahead of him. The ability to arrange music and visuals in such a creative manner isn’t something that one stumbles across every day. If you are the type of person that enjoys electronic music, art, or a visual journey, I would highly recommend giving Petit Biscuit a chance. You can get a schedule of the rest of his tour dates here https://www.petitbiscuit.fr.