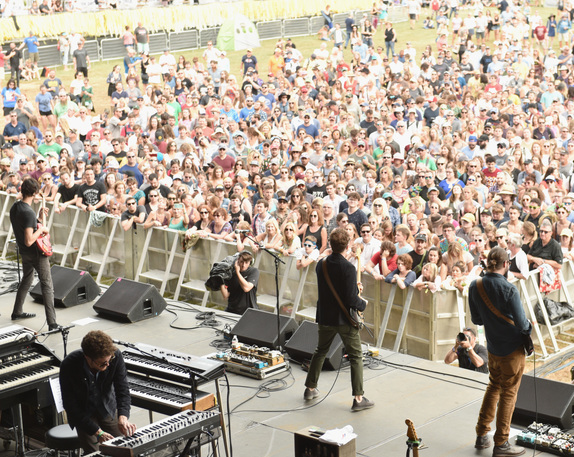 Franklin, Tenn. – The fourth annual Pilgrimage Festival had it all. It burned bright for a touch over 6 hours but then the sky bruised and it was quickly saturated into submission by Lumo.

Did Pilgrimage bite off more than it could chew? Was it lack of experience? Was it pressured by its insurance provider? Did local authorities give an ultimatum? Did the baby Jesus god come down from his cloud tower and lay a nasty curse on Harlinsdale Farm? Honestly? It seemed like a combination of all of the above.  One thing is for sure, among the monsoon of water and speculation, I can’t recall a time in my 15+ years of concert-going experiencing such a suffocating sense of anxiety and disappointment. But wait, let’s rewind to the bright times.

Saturday started off sweltering but full of awe. The grounds of the farm are gorgeous, sweeping and charming with mountains around and subtle, quaint clutches of architecture.  A welcoming feeling was certainly present as one strolled towards the Art Barn at the center of the festival. On the way were course after course of interesting wares, sights and services, a feast for the soul. There was a gilded but light flower cart, book pages crafted into graphic art, a rolling record store, the whole zymological rainbow of the exceptional Bell’s Brewery, local farmers looking for hugs and much, much more. Not to mention the plethora of food options congregated around the Art Barn emanating a glorious smell that seemed to lift you off your feet pulling you through Eden. Pilgrimage even catered to the kiddos. I was skeptical of this at first, until I saw a stage and a playground full of smiles without a single tablet or smart phone blocking them. It was a magical scene.

This was all grand of course, but what about the music? Fortunately, a variety of wonderful sounds populated the grounds for those fateful six hours. The Record Company injected pure energy into the crowd with their raw, searing blues rock and powerful, no nonsense vocals. Valerie June aired on the other side of the spectrum levitating the crowd with her flowery, quirky, folk pop. Tyminski and the Infamous Stringdusters made Tennessee proud with their mighty fine pickin’ and singing, while Mat Kearney serenaded on both sides. It was during a particularly personal Counting Crows performance and 30 minutes before Hozier that the announcement came.

But first, I spoke with a surefire sun beam of sound before the darkness came. She is a Virginia native, second time Pilgrimage performer, and Nashville transplant Emma Hern. The starry-eyed songbird started early, finding her passion in a likely, yet unlikely place.

“I definitely screamed in my shower – I would take showers for an hour and just practice singing. My parents probably thought there was something terribly wrong with me at the time. I would try to sing Aretha Franklin but I was seven and couldn’t really do it.”

Her new singles “Love is Killing Me,” “Fool” and “Say Yes” showcase her admitted influence with more than enough soul to make the queen proud. Within these tracks all of her sonic layers become apparent, flowing in and out of each other with ease. From early 2000’s pop divas, to 90’s country, blues, jazz and back again. As a whole, her tracks are a passionate, powerful mixture. According to Hern, this was very much the goal.

“I want this old school sound that I grew up on, but I want it to be accessible. I want to bring in people who don’t even know they like gospel chords because the chorus is poppy. I would say [I gravitate to] soul. I listen to a lot of soul and blues. In Boston, I would sing blues covers in a band all the time.”

“That seems like an entire lifetime ago. At that point I was in Boston, I was going to school at Berkley and I was kind of a songwriting major. I had one of my teachers ask me to start submitting stuff and it’s great to get a little recognition and get on the right path as a songwriter. But the song that I got [recognized] for is almost bluegrass. It was just me and an acoustic guitar. And I kind of needed to go there, to then be able to come back to what has always been home,” explained Hern.

It seems she has certainly found home in many more ways than one. Hern made waves after only being in Nashville for a year. A particularly stunning feat, and most importantly, after being exposed to her music, her performance, and her talent; it’s crystal clear that she deserves every bit of the success she’s garnered.

Finally, the inevitable barometer drop, the moment when all patrons were asked to evacuate to the safety of their cars, the Factory, or the local library. At its worse it was four to five lightning strikes, with some grumbles of thunder and buckets of rain from the first system. For what seemed to be an eternity without news, I finally spoke to some passerby’s who had no official news. I migrated to the Factory where the majority of faces were as dreary as the weather itself. These were the people who truly cared about the music.

Shortly after, a tinge of hope as a fairly large crowd migrated towards the entrance of the festival. Along the way I heard whispers of Lionel Richie possibly going on stage. I followed. Feet soaked in mud we stood in the late evening twilight, the rain diminishing, the anxiety crushing, with only a lone bicycle taxi to cheer on while he tore up his calves. An occasional chant of “rain or shine” broke the silence.

A short time later official word came. The rest of the night was cancelled and the dejected survivors started the slow march back to their vehicles. The next morning, the second day of performances was a casualty as well.

Countless people poured tons of time and money, blood, sweat and tears into this event, I get it. They have our “safety” in mind. I get it… But it is hard to put into words how dismal I felt and how the whole atmosphere felt during that walk and the morning after. As to be expected, sadness turned to anger, I certainly fell victim thinking back to a Phish concert I had attended at (then and always) Deer Creek near Indianapolis where massive, multi-branched trees of lightning lit up the entire sky nearly every two seconds, where I was concerned a tornado might pop up at any moment – and the show went on. Dangerous? Most likely. An older venue made for outdoor concerts? Yes. But regardless, the show went on.

Ultimately, I’m most depressed by the idea that Pilgrimage missed the opportunity to be epic. Swampgrounds or no swampgrounds. To be emblazoned in the stone tablet of music festivals.  It held such promise, and sadly, I doubt it will ever be presented with that opportunity again. Rain or shine.