Orlando, FL — With sweat dripping from the walls, the 3-piece hardcore punk band from California The Fever 333 shook the intimate venue Soundbar for their solo tour. 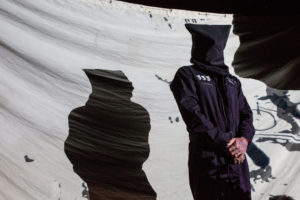 The show opened with vocalist Jason Butler (ex-vocalist of letlive) standing silently, hooded, with a black and white video playing overlaid with a compilation of sound clips from political speeches. For the next three minutes this continues and sets the tone of the band’s strong feeling to stand up for injustice, inequality, and racial discrimination. 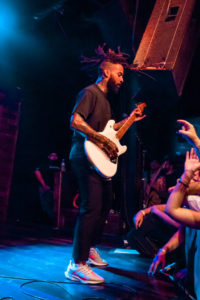 The set progressed with Butler ripping his hood off and the curtain dropping to expose guitarist Stevis Harrison (ex-guitarist of The Chariot) and drummer Aric Improta hyped and ready to rock. They continued with high energy which was contagious, guitar swings that just missed items within their reach, and kicks seeming to reach the ceiling above their heads. Halfway through the set, Butler charged through the audience to climb a banister in the back of the venue to finish out the song 10 feet above the audience, holding on just by his own hands. As Butler was working his way back to the stage, he pulled two kids from the front row up with him and got a promise from them that they would do everything they could to create a better world for their generation. This was followed with a roaring applause from the audience; Butler set his mic down to thank all of his fans in this intimate setting and for fully supporting this newly formed project. 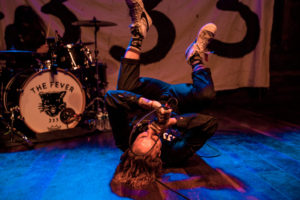 Though The Fever 333 only formed in 2017 and have since released their first EP Made In America, they still had a passionate fanbase who was moshing and singing along with every song through their entire set. Their intense and very interactive show ended with the band drenched and shirtless.

This was a show for the books! Tickets available here: https://333.thefever333.com/