Atlanta, GA — The Devil Wears Prada brought along a stacked lineup of friends for their 10 year celebration tour of the With Roots Above and Branches Below album. 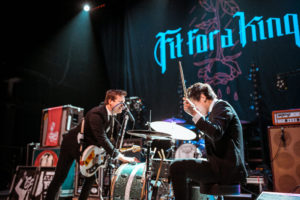 Starting off our evening is a 2-piece rock band coming back to play a hometown show in Atlanta, 68. Entering on the stage both members were dressed in suits with hair slicked back, but it was not long through the set before their jackets were coming off and hair tussled. With their rockabilly sound and punk influences this band warranted the first of many mosh pits to form during the evening. The duo brings soaring energy and high kicks while flinging around guitars and drum-sets. To end the set, vocalist Scogin removed one piece of drum equipment at a time until drummer Yamada had nothing left on stage with him except his two sticks. A great way to start the evening! 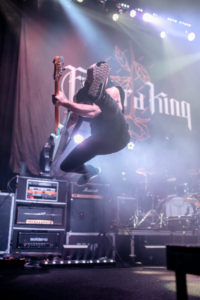 Our second band of the evening is a Christian metalcore band, Fit For a King, recognized for their impactful lyrics and interactive performances. This band is known for O’Leary’s swinging bass, Kirby’s high highs and low lows, and Easterling’s heavy and hard hitting drumming. With the recent departure of former guitarist Lynge, the band was fortunate to bring along Invent, Animate’s drummer Trey Celaya who is also very gifted on the 7 string. Their set was sprinkled with old favorites and new hits that encouraged a “wall of death” to form in the mosh-pit halfway through the set. This was the perfect crescendo for our veteran headliners of the evening. 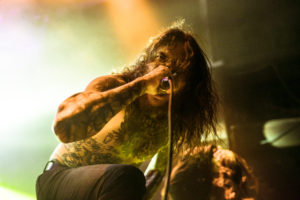 As the lights dim to a blackout, our headliner of the evening entered the stage to blow the crowd away. From their amazing light show to their mesmerizing guitar licks to slow and heavy breakdowns, this band has it all.

The entire crowd was moving, swaying, and moshing along to each song and screaming along with vocalist Hranica. The energy level and crowd interaction each band member brings to the set shows why The Devil Wears Prada has earned the hearts of their fan base.