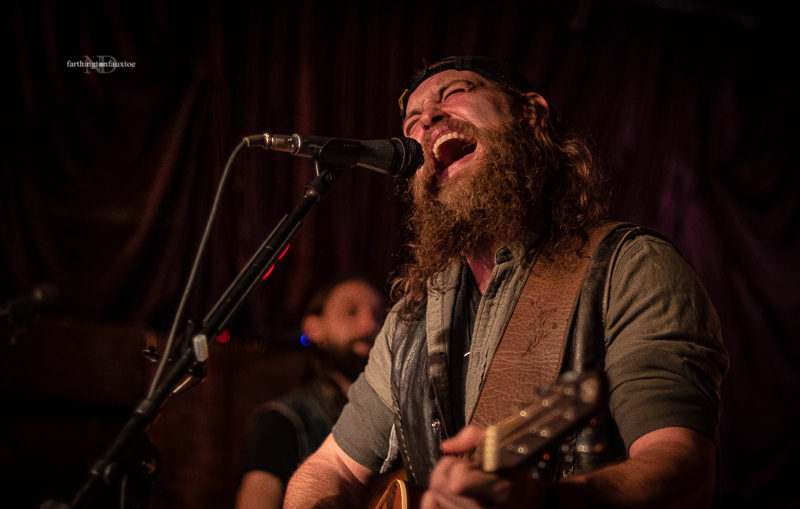 Nashville, TN – Peel away the neo-bougie brine of the Ellison Square area and you’ll find a place where raw, non-homogenized tunes still buzz true from the questionable doors.

This place is called The End, fitting in these tumultuous times, and it is the Music City underground filled with ironic stickers, tobacco taint and a churning sonic soul. Saturday night was no exception as The End hosted a legion of bands that all had a different feather in their cap. I was thrilled to see so much variety in an atmosphere that seemed like it would host only a certain type of music fan. But as the room filled, I was intrigued to see the crowd matched the variety of the music.

It was Stump Tail Dolly (solo) who graced the aural hearth first, so shy but smooth, I thought he was one of the technicians. While his energy was somewhat low, his music seemed to transport the listener to distant, simpler past. It seemed his ideal venue would’ve been a breadline or a small roadside camp. He was magnetic and mysterious in his playing abilities.

Next up was Brother Man, a swirling, sassy duo with tornadic blues and rock stylings. It was as if someone injected the Black Keys with a little bit of James Brown and Andrew Lloyd Webber and it was an absolute treat. Like Gerard Butler from 300, they were kicking ass in outfits undoubtedly raided from Nathan Lane’s closet. It was unique, infectious, and even as a type this, I want more.

Third came Cody Parks & the Dirty South, – though not exactly this author’s type of music genre, they weren’t bad at all. A throwback to ’80s hair bands (who could be looked back on as embarrassing wet dream stains on the otherwise gorgeous musical fabric of history), but these fellas were rocking that vibe proudly, and had the crowd amped for the headliners of the evening.

Finally, the main event. The Native Howl has been on my radar for a while now and I chose to stave off listening to them until I could see them live. I stuck with my goal and it was worth every single nanosecond. When I first heard them mention thrash grass I was instantly hooked. They combined elements of bluegrass and metal in a supremely seamless way and with such a fiery, inclusive energy, I felt like we were all part of the band. Their passion was that palpable. The vocals were sharp, perfectly sarcastic at times and melodic. The music was blistering and beautiful at the same time… There is, and will always be only one Native Howl, and in my mind, they are the stuff of prophecy in the current musical landscape.

Thankfully, this was yet another special night in the soul of Music City.