Cincinnati, OH – It’s a festival name that has perplexed people for years.  “What is a Bunbury?” is a frequent question asked by performers on stage.  With its bumblebee mascot and tagline “Bee Here, Bee You, Bee Free,” it’s still anyone’s guess.

The festival spanned three full days, with music on four stages along the banks of the Ohio River where the famed Serpentine Wall meanders along the water’s edge.  Bunbury 2019 presented the festival goers with a diverse musical experience, to say the least: rock, rap, rap-rock, pop, new age, reggae, R&B, indie pop, dance party… One person commented that it seemed as if the organizers didn’t know their target market, but I would argue that they chose an eclectic mix of music for fans of all varieties.  How many of us listen to only one type of music?  Who among us isn’t interested in exploring new sounds?

The weekend weather forecast was bleak.  Although clear on Friday, there were storms predicted both Saturday and Sunday.  It’s that time of year in Ohio…unsettled and uncertain.  However, luck was with the Bunburians, and not a drop fell for the entire weekend.  Raincoats stayed in cars. 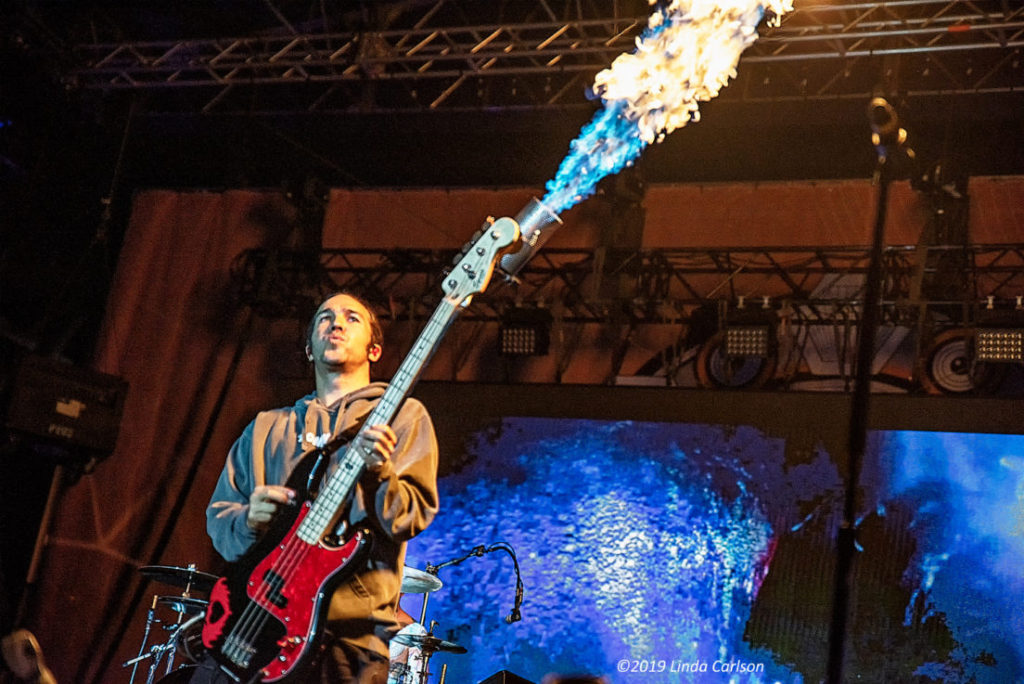 The festival opened Friday with The Orphan The Poet, a Columbus Ohio foursome with a solid, entertaining brand of rock that set the tone for the weekend.  Some standouts from Friday’s lineup included Halfnoise, Poppy, Joywave, Machine Gun Kelly (yes!), Pigeons Playing Ping Pong, NF (another yes!) and Stone Temple Pilots, with the night’s headliner Fall Out Boy performing an outstanding set that included a fire-breathing bass guitar.

Saturday was another glorious day, beginning with another Ohio band, 90’s Kids.  Great Good Fine OK opened the main stage.  The day progressed with the sounds of bands like SHAED, Common Kings, The Blue Stones, Flora Cash, Jukebox the Ghost (who drew a crowd much larger than the allotted space on the River Stage), Tropidelic, Dashboard Confessional (terrific!), Blue October (with a noteworthy performance by Justin Furstenfeld), Jeremy Zucker, AWOLnation (a pink shorts suit…not many can pull that off with such panache) and Sublime with Rome.  Much anticipated, Greta Van Fleet closed the day with a knock-out performance from four incredibly young guys.

The venue itself is a dream for a festival, nestled between the Ohio River on its southern edge, and downtown Cincinnati skyscrapers to the north.  Besides music, there was plenty of food trucks, beer trucks (but not enough coffee trucks, just sayin’) and vendors to satisfy those who wanted to wander a bit between stages.  Kroger’s had a van where you could make your own flower headband/crown (you know, to attract the bees).  Festival-goers relaxed on the Serpentine Wall steps, gazed at the boats floating by, and listened to the sounds of a wide-ranging mix of music.

Check out next year’s Bunbury Music Festival.  If it’s anything like this year’s offering, you won’t be disappointed.