Cleveland, OH – East of Cleveland, near Shaker Heights and Gates Mills, is the home of prestigious Laurel School, a pre-K through high school private academy for young women.  Since 2016, Laurel School has hosted a two-day music festival dubbed Laurelive, bringing nationally touring bands to the school’s Butler campus.  The festival is called “Music with a Mission,” promoting arts at the school and in the local community.

The festival was well-organized and well-run.  With no parking available at the venue itself, there were nearby large parking lots with frequent bus service to bring attendees to the festival and then return them to their cars smoothly and efficiently.

The weather cooperated beautifully.  Sun, some clouds and a nice breeze… not too hot, not humid.  Being in the Midwest, it could have been the complete opposite this time of year.  The family-friendly festival event offered activities for children, including spray-paint installations.  Lots of good food trucks (shout out to Fahrenheit for their divine pork-belly and watermelon tacos!), as well. 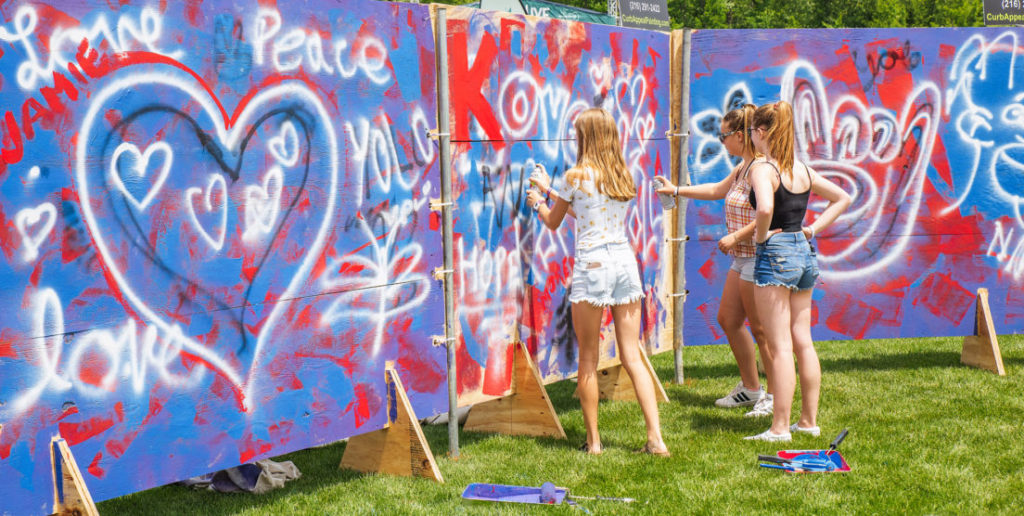 For Laurelive 2019, there were three active stages: two large stages facing each other in an open athletic field, and one more-intimate stage nestled cozily among the trees.  This smaller stage played host to budding, emerging bands.  In all, 30 bands performed over the weekend, 15 each day.  There was a nice blend of family-friendly music offerings, including headliners Hozier (Saturday) and Sheryl Crow (Sunday).  Nothing too hard, but plenty of upbeat, mellow and quirky music.

The excitement for wildly popular Hozier could be felt throughout the crowd.  When he came on stage, all 6-foot-five inches of towering presence, his grin lit his face and the audience.  His ease on stage was infectious, and the songs…oh, how they rang out!  What an ideal fit for this festival.

Sunday brought a roster of terrific music, as well.  Australia’s Castlecomer, a Laurelive alum that had previously graced the smaller stage, was stoked to perform the main stage this year.  Lead singer Bede Kennedy showed nothing but absolute swagger and charisma, engaging the audience with his very physical, very personable charms.

From nearby Akron, Red Sun Rising brought the hardest rock of the weekend’s fare, giving an electric mid-afternoon performance.  Lead singer Mike Protich acknowledged that this was not their typical music festival (they usually perform at rock and heavy metal shows), but this on-the-rise band donned casual attire befitting the outdoor event and put on a terrific rock performance.

Quirky AJR, a trio of multi-instrumental brothers, was terrific.  Lake Street Drive was on point and Trombone Shorty from New Orleans was a delight, exhibiting so much energy and spirit.

Sheryl Crow closed the event as the sun was setting.  It was clear that her performance was highly anticipated.  She performed fan favorites like “All I Wanna Do,” “Every Day is a Winding Road” and “If It Makes You Happy,” as well as songs from an upcoming CD that will feature industry-leading musicians like Stevie Nicks and Don Henley.  Crow was lovely and poised, and spoke warmly to the assembled crowd.

All in all, a terrific event, but it appears that this was the last Laurelive Festival.  The organizers are looking for a new, larger venue to host the event next year, as this year’s projected 20,000 attendees over the course of the weekend is outgrowing the capacity of Laurel School.  A new festival name will likely accompany the location, though early reports suggest that the family-friendly theme of the festival and the contemporary music will follow to the new venue.