A summer music festival is a fairly simple, predictable recipe and the 17th Annual Forecastle Festival is no different. The most important ingredient is the weather, without which there can be nothing, as last year’s Bourbon and Beyond Festival, also in Louisville, overwhelmingly demonstrated (day three was cancelled due to mud and rain). Next, the attendees, campers, one day passers, three day passers, VIP ticket holders, music purists, all the folks who make up the estimated 75,000. Some maintain that the premium ingredient is the lineup, the artists, when and where they are scheduled over three very long days.

Weather-wise it was a pretty typical July weekend in Louisville – mostly miserable with temperatures hovering in the low 90’s, soaring 4 to 5° higher with humidity, heat index, and proximity to the Ohio River taken into account. The sky was blue, the ground was very dry, stirring up dusty sand clouds at Waterfront Park. Those who came prepared in lightweight clothing, with sunscreen and water bottles did quite well. Those who were not, got home at midnight, sunburned and dehydrated. 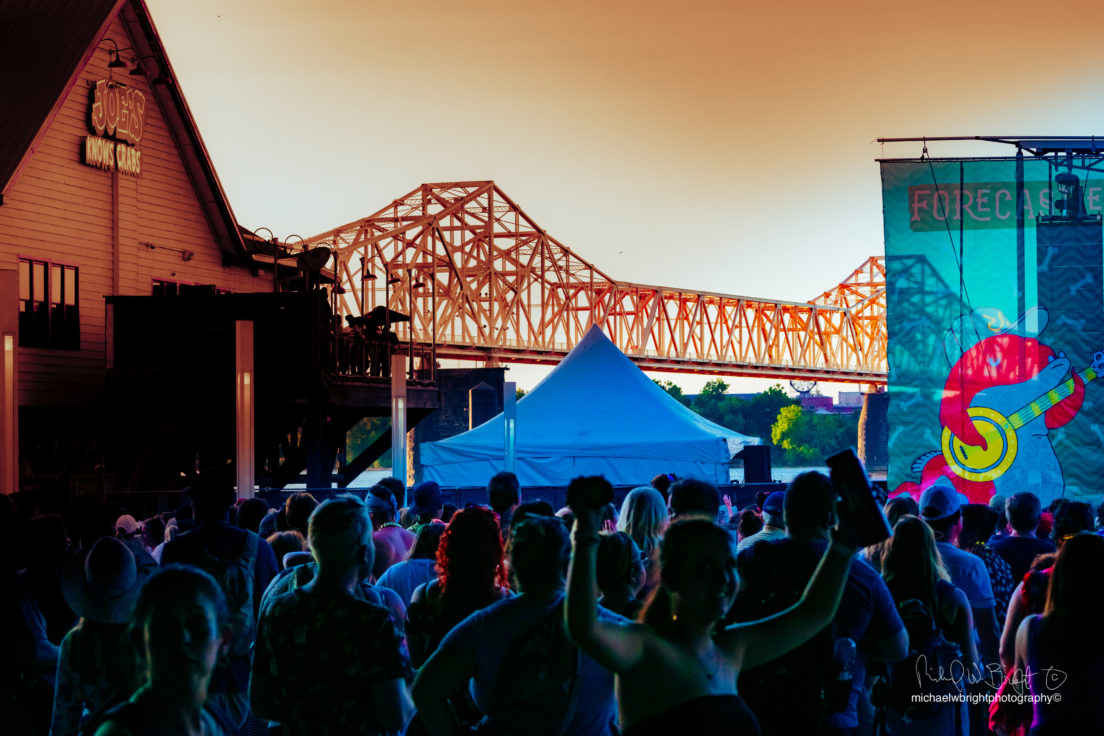 The crowd was one of the most well behaved in recent memory. Sixteen to sixty, festival fans were friendly and well-behaved despite the bounty of alcohol in easy reach. Police and security were around but barely visible and not in great need over the three days. The EMT’s appeared half a dozen times hauling stretchers laden mostly with the dehydrated.

Folk, bluegrass, rap, hard rock, psychedelic, and funk were all available across the five different stages. The “Port Cove,” was set to the side, in the center of surrounding berms. It was dedicated to DJ’s and EDM. So much has been written about and so many photos taken of the Forecastle Festival headliners, this year I was interested in the buzz bands, mixed in with some of my new favorites from the last two or three years.

Lucius, appearing on the Boom Stage late afternoon Friday, was a pleasant surprise. They’ve gotten great press including the Rolling Stone accolade, “11 Great Albums You Probably Didn’t Hear in 2018.” The focal point was singers Jess Wolfe and Holly Laessig, out in front with matching pink and white capes. Lucius dipped into multiple genres, but this afternoon they shined most when they showed their country side, performing, “Dusty Trails,” toward the end of a short set. 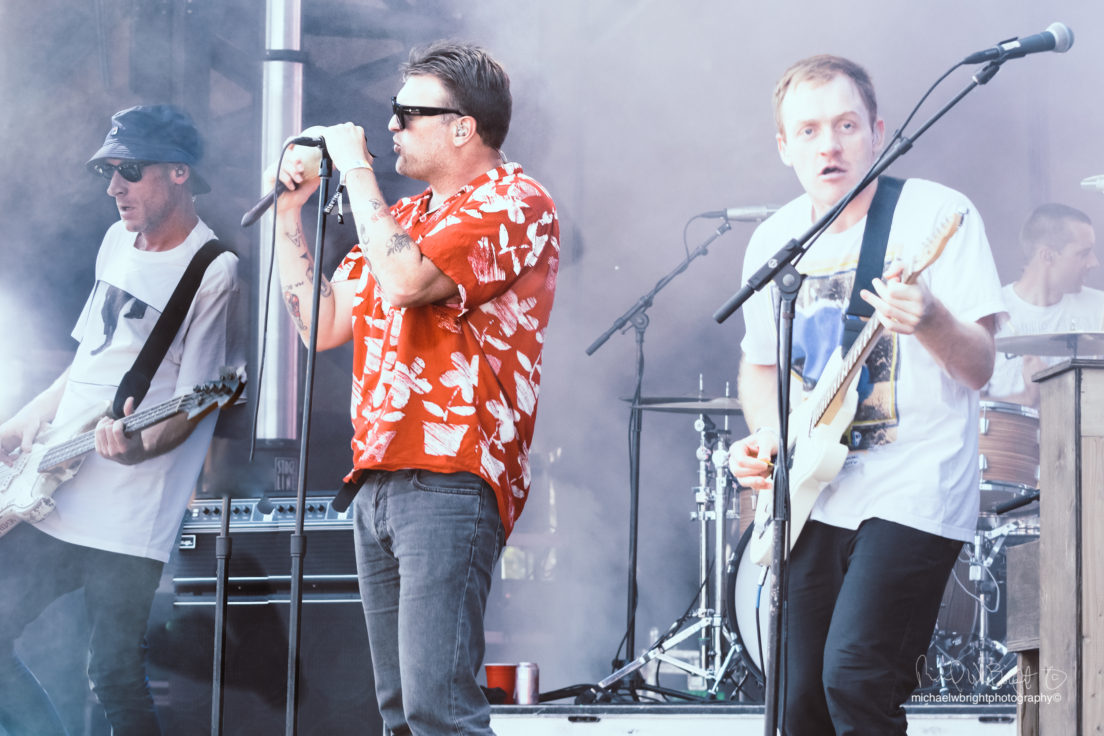 Cold War Kids hit the Mast Stage late Friday afternoon with my first taste of hard rock for the day. I’d been looking forward to seeing them again. These guys prove themselves over and over with their live shows. The onstage interplay between Matt Maust (bass) and David Quon (guitar) never gets old. Add singer Nathan Willett to the mix and you’ve got endless possibilities, great to hear, fun to watch, fun to shoot. Matt and Nathan have been together since 2004 so they’re fine tuned to the same frequency.

Portugal. The Man sounded great as expected, but as a newbie fan I wanted to see their spectacular lighting, psychedelic screens and fantastic imagery. The sun had begun its slow arc over the Ohio River so the band’s 7:15pm showtime allowed in far too much light, although some of their most powerful surreal visuals cut through. They opened to a roar from festival fans when they started the intro to Metallica’s, “For Whom the Bell Tolls.” They closed to equal elation with, “Feel It Still.”

The hot dusty shade, underneath the interstate bridge that runs along the river was a suitable setting to discover The Marias. Their pop-psychedelia-dipped-in-soul that veers into a latin dance vibe has garnered praise from alternative press over the last two years. It was still surprising that so many of the few hundred fans were familiar with their songs, singing along on the opening afternoon of the festival. 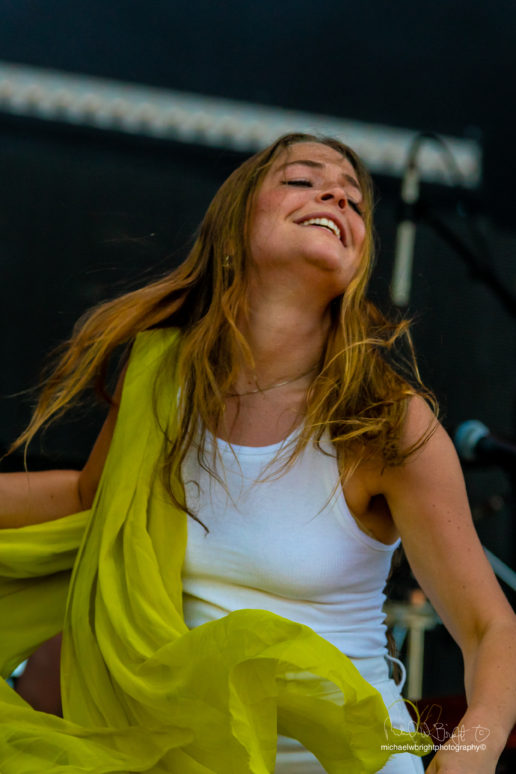 For my money, Maggie Rogers was the festival draw. You could see anticipation, excitement, then joy, sweep across the festival crowd as they moved away from all concerns and swarmed toward the Mast Stage just after she appeared. She worked its entire length, dancing, singing, sweating while her crack band pumped behind her. For those who had been following Roger’s rise, they had seen her perform the previous morning on NBC’s Today, and watched her first major label album shoot to #2 (US Album chart) over the past six months. If you were feeling the wear and tear of the late half of festival day two, her 45 minute set got you back on track. As with the greatest performers, she saved the best for last, left you wanting more, closing with last year’s #1 triple A single, “Light On.” She is fronting a sold out tour schedule across the country and she was the hottest, most exciting musical act at this year’s Forecastle Festival.