Chicago, IL — What started out as the Summer Gods Tour (including Ra Ra Ra, Jimmy Eat World, and Third Eye Blind) quickly turned into the Weather Gods show. Slated to start at seven p.m. the show was delayed two and a half hours due to a severe Chicago thunderstorm that rolled in out of nowhere. Not only was the show delayed, but, the entire outdoor amphitheater was evacuated. By the time the weather cleared it only allowed an hour and a half left to play the concert. This, unfortunately, meant the cancellation of Ra Ra Riot and a short set for Jimmy Eat World. 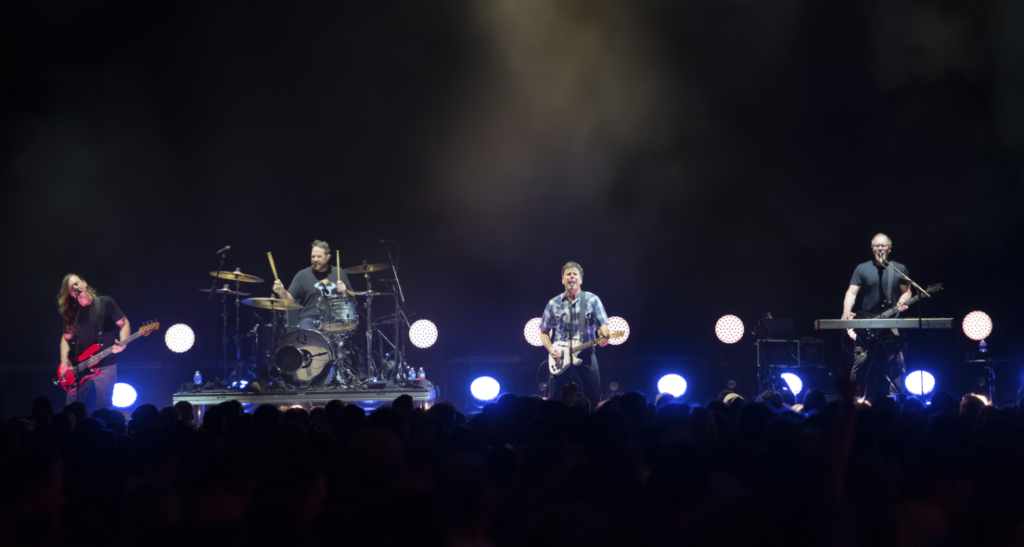 The thing about Huntington Bank Pavilion is that it’s on an island near downtown Chicago while at the same time in the middle of nowhere. So when the show was evacuated many people sought shelter ten to fifteen minutes into downtown Chicago. At the same time, everyone was being given live updates on social media. This in turn meant that as soon as the all clear was given everyone rushed back to the venue. Some people weren’t even able to catch any of Jimmy Eat Worlds thirty minute set. The band seemed very thankful that all of us stuck around and came back for the show. All in all though, the crowd was completely in and singing along to their hit, “The Middle.”

After what seemed to be about a fifteen-minute set change Third Eye Blind hit the stage. Hidden behind a giant screen the band (only showing silhouettes) launched into one of their new songs “Screamer.” At the end of the song, the screen dropped revealing the band. They immediately went straight into another new song called “The Kids Are Coming to Take You Down.” It was after this that lead singer Stephan Jenkins thanked the crowd for staying and announced that the curfew had been extended to eleven-thirty. They then promptly jumped into “Never Let You Go,” which set the crowd wild. Throughout the show, it was evident that the band planned on giving the fans what they had paid for, stopping many times to talk to the crowd and amp them up. This was a band that was in no rush to be done. They took their time playing through a myriad of old and new songs. However, as it happens all things must come to end. The band ended their set with “How’s It Going to Be” which of course had the entire crowd singing along. As an encore, they came back and played their biggest hit, “Semi-Charmed Life” to everyone’s delight. It’s at this point that Jenkins announced that they were going to play until they cut the power. He said, “they’ve threatened to fine the hell out of us.”  They then went into “Waze” before finally ending with “God of Wine.”

The North American Summer Gods amphitheater tour continues all the way into August. You can find more information at https://www.thirdeyeblind.com/tour