Chicago, IL — This is Chicago and here in the big city, something spectacular can happen at the drop of a hat. What starts as a typical Tuesday can all of a sudden break into a massive dance party. The mundane can become magical. When stepping into Thalia Hall I didn’t realize that tonight would be that kind of night. 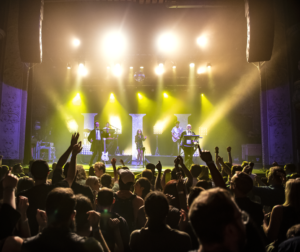 The first thing I noticed when entering the great hall was that the room was filled with fog and in the middle of the stage was a large red button. I knew immediately that some sort of lighting system was about to be invoked. While gazing around the room I noticed that the crowd was a mix of twenty and thirty-somethings with a sprinkling of older people. To be completely honest I wasn’t sure what kind of crowd Tuxedo would pull in for a ten o’clock show on a Tuesday, but the minute the band came on stage I got a clear idea of what the night held in store.

Tuxedo’s style can be described as funk, disco, pop, a smidge of hiphop, and a whole lot of fun. Fun is the important word to remember here… I mean the band’s motto is “The only time you wear a tuxedo is when it’s time to party” and from what I could tell this crowd came to party! Consisting of Mayer Hawthorne and Jake One, Tuxedo started with a little wheel of fortune humor as they tried to guess the letters appearing behind them. The words spelled the band’s name, and that’s what the crowd started yelling. As soon as they started playing, everyone started dancing and the multi-colored lights started pulsating to the music. I quickly learned that the giant red button that had been so curiously placed was the “HO” button. Any time a member of the band hit the giant button it let a loud HO! As you can imagine the button was hit more times than a boxer. As the night progressed the entire place turned into one giant dance party with the band weaving in an out of classic disco songs and their original music. The energy in the building was electric! I don’t think I’ve seen a crowd move that much in years. People of all ages from the balcony to the floor were grooving the entire show. The night turned into a bit of a blur in a haze of fog, lights, and sweaty bodies. The band and the crowd were intertwined in this colorful joyous bundle of happiness that you rarely see at a concert.

The culmination of the night came when the band closed with their hit, “Do it.” If you’re not familiar with the song or video, it’s about a guy that just wants to dance after a long day. It’s one of the songs that put Tuxedo on the map, and a perfect early week pick me up for the crowd, who seemed to dance harder than ever to the beat. Tuxedo has four shows left on their current tour. You can find more information on the band and tour at http://tuxedofunk.com/tour/