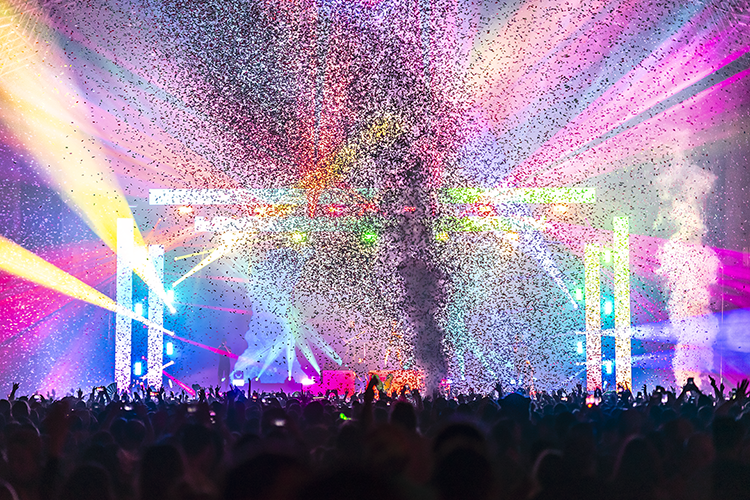 Chicago, IL — Grant Kwiecinski, better known as GRiZ, is a producer, DJ, songwriter, musician, and a seemingly all-around nice guy. Currently, GRiZ is touring across North America in promotion of his newest album Ride Waves. I was able to catch up with him at his Navy Pier stop in Chicago.

The Chicago show was one of the biggest shows on the tour. It wasn’t just the size of the crowd that made it one of the biggest, it was also a homecoming of sorts. GRiZ, who grew up outside of Detroit, was able to play to a Midwestern crowd that came out in droves to support him.  This show was the closest thing to a rave that I’ve seen in a long time; There was so much PLUR that it caught me off guard. But I suppose when you look at it closer it all makes sense.

You have an electronic artist/DJ that also plays saxophone and guitar during his sets. He is known for his free shows and motivational social media speeches while also owning his own strain of marijuana. To top it off, he does an annual event every December called the Twelve Days of GRiZMAS. Over these twelve days, he does fundraising events with the proceeds going to different charities. The culmination ends with a two-day festival. So what on the surface looks like just another DJ act is actually something much deeper. This then completely makes sense why a group of modern-day ravers/hippies are his core following. It’s all about love and being good to each other.

The Chicago show was absolutely packed wall to wall with people. This being my first GRiZ concert, I wasn’t one hundred percent sure what to expect from the crowd or the show itself. I can say that I was pleasantly surprised by the kind and welcoming demeanor of the attendees. Moving through a crowd of people on a normal day can be a challenge. Moving through a crowd of people at a concert can be downright horrible. However, at this show, I was able to move around with ease. Everyone respected each other’s space and was willing to move to let you through (which, as a photographer I quite appreciated.) 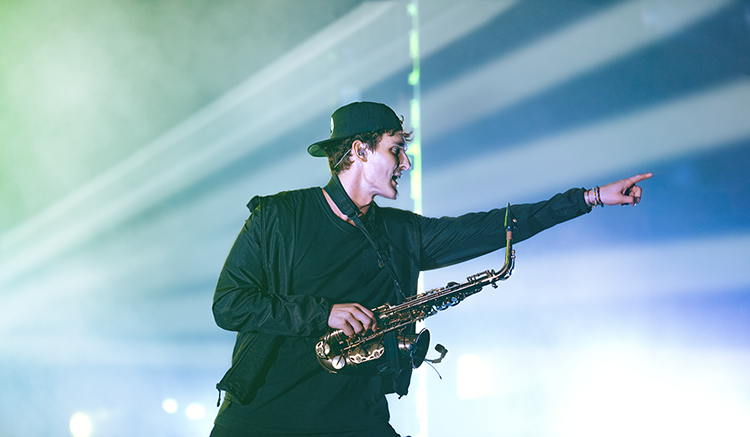 I was given some firsthand information that GRiZ was going to start his show in the middle of the massive crowd by the sound booth. I made my way to the middle and noticed a small platform located directly in front of the sound engineer. The lights dropped and a bunch of fog started to encompass the small platform, when all of a sudden, a blast of laser beams came shooting out of the platform. Out of the fog and in the middle of the lasers GRiZ arose. He started a song and just as suddenly as he appeared, he darted off into the crowd making his way towards the main stage. Instead of cutting around the crowd, he hurried through the middle hugging and greeting fans as he continued to perform.

What occurred next can only be described as one of the best light shows I’ve ever experienced. Throughout the almost two-hour set, fans were treated to a plethora of intensely multi-colored laser beams that shot from the floor all the way to the heavens. Sandwiched in between this amazing light show was a multitude of different live performers that came out to sing some of GRiZ’s greatest hits while also performing some of his brand new songs. The entire show was wrapped up in a truly extravagant fashion when the University of Illinois marching band joined him on stage for a final song. It was by far the most surprising and captivating moment of the show. When it was all said and done, the fans (who were still completely stimulated) didn’t want to leave. The lights were up and security had to practically push people out the door. These fans would surely be waiting for their next chance to see GRiZ live in concert.

You can catch the remaining dates on the tour by visiting http://www.mynameisgriz.com/tour