Chicago, IL — Located just off of the Milwaukee, Damen, and North Avenue intersection, the Chop Shop is an unassuming building housed in the center of Wicker Park. The Chop Shop (a former auto body shop) houses a bar, deli, restaurant, and butcher shop. But what you can’t see from the front of the building is that it also contains a six thousand foot concert venue tucked neatly away in the back. This unique venue will be the stage for tonight’s show which will be performed by an artist that himself is also quite unique. 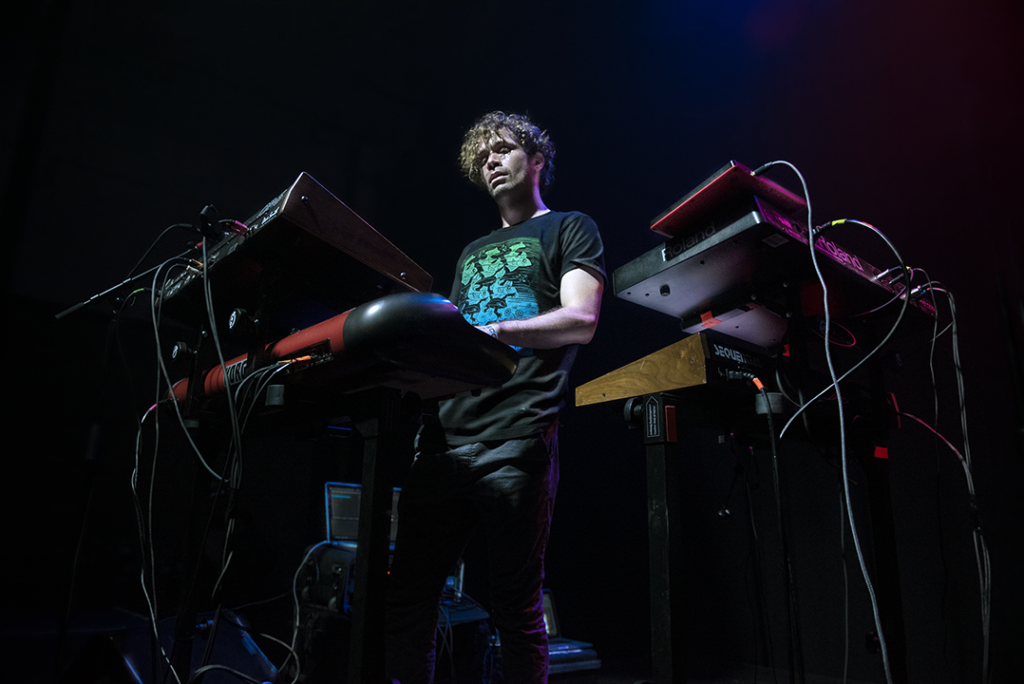 Moon Boots (originally from Brooklyn) is a Producer, DJ, and keyboardist who also just happened to attend Princeton. From a young age, he always knew that he loved music. It was in his formative college years that he realized that he wanted to pursue music as a career. He decided to drop everything and move to Chicago to cut his teeth in the home of House Music. While in Chicago he met local musicians and DJs that helped propel him further along his musical journey. It was around this time that he met Perseus, founder of a new label, French Express. Through this chance encounter, Moon Boots delved deeper into the world of French House and started mixing the nuances of French House with R&B and other forms of soulful/groovy music. These new influences became the base of his signature funky/soulful music style.

While known for his danceable and flowing DJ sets, Moon Boots also wanted to weave a live set into his repertoire. Tonights set was a live show in promotion of his new album Bimini Road. The name Bimini Road is based off the (similarly named) geological formations found in the Bahamas. Some say the formations came from an ancient, more civilized culture. Moon Boots manages to capture this idea and sound through sweeping synths, deep beats, and futuristic house beats. His live set consists of himself, a guitarist, drummer, and a handful of singers (with all singers performing on separate songs.) Seeing that Moon Boots had lived in Chicago, the crowd was familiar with his amazing style and already excited in anticipation of what was to come. When the first beat dropped, the crowd immediately started grooving in a synchronistic fashion. Through the hour and a half set, the crowd continued to dance with very few breaks in the energy. Furthermore, everyone seemed to know the words to every song. One of the standout performances came from a singer named Black Gatsby who worked the crowd like a puppeteer with a marionette while performing “Whisper in the Wind.”

The rest of the night was filled with the sounds and grooves that have come to define Moon Boots and the city of Chicago. The crowd left Chop Shop tired from all the dancing, but on a definite high that only a Moon Boots groove can give you. The Bimini Road Tour will continue through March 6, with a few stops left in the United States. To find out more visit https://www.moonbootsmusic.com/tour