Destin, FL – It was a great Friday night for 90’s rock fans as Fuel and Soul Asylum lit up the Village Door Music Hall. The small two-story venue was packed to the brim with fans of all ages. Fans gathered on the stairs, at the bar, and wherever else they could manage to find a good view of the show. The venue had a unique set up in which the upper level allowed guests to choose between a front or back view of the band.

Since there were only two bands performing, both Soul Asylum and Fuel were able to play for around an hour each. Drinks were flowing nonstop for the entire duration of the show – Florida knows how to have a great Friday night!  Soul Asylum started off the evening with a phenomenal set. For a band that found fame twenty plus years ago, they still sounded as great as ever. They played a variety of old and new songs including a few songs off of their newest album from 2016: Change of Fortune. The crowd loved singing and dancing along to some of the greatest hits of the early 90’s: “Runaway Train,” “Black and Gold,” and “Somebody to Shove” all off of their triple-platinum 1992 album Grave Dancers Union. 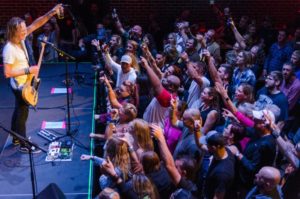 Fuel took the stage around 9:30 pm and had the crowd instantly drawn in by their loud and intense tracks. The fact that Fuel only has one remaining member of their original lineup, vocalist Brett Scallions, did not stop them from putting on a great show. All the musicians sounded great together and you could tell they were really enjoying being up there playing for a packed room of fans. Scallions kept the crowd going by interacting with them between songs. Towards the end of their set he asked if there were any punk fans in the crowd which led to the crowd erupting in cheers. They ended the night with one of their most popular tracks of all times, a song that has the ability to get stuck in your head for hours at a time: “Hemorrhage (In My Hands).” 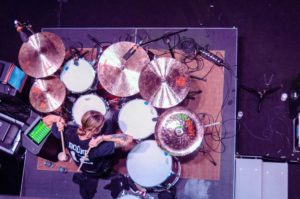 The stage presence from both bands was exceptional. There wasn’t a dull moment during either of their sets – plus the atmosphere of the venue and the crowd made the show that much better. It was really something special being able to hear so many of the songs live that my parents showed me growing up. If either band makes it to a city near you in the future, I would recommend making it out to a show for a great time.