Louisville, KY – Weather history would eventually reveal that this three day festival would be part of Louisville’s hottest and driest September in recorded history. Hydrate, hydrate, take breaks in the shade whenever possible, use sunscreen, and most of all — don’t forget to…hydrate. So, it was Friday, September 20th, day one of Bourbon and Beyond at the Highlands Festival Grounds, and yep, I was so hydrated… so much so that I unfortunately had to run for a bathroom break just as Lukas Nelson & Promise of the Real began playing. Willy’s son Lukas Nelson has spent his time playing with dad and with his own band, Promise of the Real, Neil Young‘s most recent backing and touring band. Thankfully I only missed the first song, and was back in time to witness the rest of their set, some fine country tinged rock, or, rock tinged country (depending on your point of view) consisting of premium musicianship, and a seven original tunes mostly pulled from the band’s June 2019 release, Turn Off the News (Build a Garden).

Bourbon and Beyond is the name of the festival, and we don’t take the bourbon part too lightly as visitors from outside of Kentucky quickly find out. In between your chosen musical performances there’s time for sampling and sipping.  Since 90% of our favorite brown beverage is produced in Kentucky, you could expect that the latest trends and products would turn up. As part of the trend that finds famous people putting their names on liquor labels, Metallica’s premium whiskey, “Blackened” was introduced to much curiosity. Their unique process of distillation involves constantly exposing the filled barrels to super high decibels of Metallica music, creating vibrations that cause the whiskey to move in and out of the charred barrel in the same, but accelerated, fashion that changes in weather produce age and color inside the barrel. Okay… well… the theory can only be tested by the quality of the final product, which I thought was pretty good.

Meanwhile, back at the Oak Stage, The Flaming Lips strolled casually onto the stage in the usual fashion of daytime performances. Next, the first of what would be a cavalcade of confetti canons began booming from behind Wayne Coyne, exploding then fragmenting 10 rows deep into the crowd. Coyne and The Flaming Lips have always enjoyed adoration in this part of the country for reasons unknown. Perhaps it’s as simple as the psychedelic rock magic they produce.  The band slammed into “Yoshimi Battles the Pink Robots, Pt. 1,” with plenty of confetti still in the air. Once it settled a bit, he disappeared, but quickly returned with a huge helium Mylar balloon of letters that spelled out the phrase, “FUCK YEAH, LOUISVILLE.”

Coyne strolled the stage bearing the balloon over his head, anchored by a harness around his shoulders and a cord attached to the balloon, pushing it out as far over the edge of the stage as he could. The magical mystery tour of sorts continued and eventually saw a large clear bubble, 10 feet in diameter, rolling from the stage out into the audience with Coyne inside, propelling the bubble as it rolled and tumbled upon the heads of the unbelieving festival crowd, the same way that large beach balls acted as audience toys back in the day. The music in the abbreviated festival set rarely paused, and ranged from 1993 to today.

John Fogerty is celebrating his 50th anniversary as a recording and performing artist. It quickly became clear to all that there was a good reason that all of his and Creedence Clearwater Revival songs have not only survived, but continue to sound vital, even current. He pumped out hit after hit proving he can still keep the swamp in his well-preserved voice and the rolling river in his aging Les Paul. With a sharp horn section on stage, a medley of Sly and the Family Stone’s, “Everyday People/Dance to the Music,” simply smoked. It was a startling performance that might have been the best of the day.

Foo Fighters, who closed day one and characteristically threw off enough energy to power the nearby airport, would be on stage shortly after 9 PM, so it was time for some serious pre-gaming.  In the VIP area the bourbon situation for some folks had just changed from money for whiskey to simply whiskey.  Some of the open and sampling bars provided opportunities to taste goods which represent another trend in bourbon production known as “blending.”  Purchasing quality bourbons from different origins or “sourcing,” then blending them in various ratios is currently producing premium whiskeys from experts who aren’t distilling and aging their own product. For example, one Kentucky master distiller has joined hands with a Japanese master blender to create a unique, elegant bourbon.  Another example, the new label “Bardstown,” has  produced three super premium blends that range from $60 to $140. Let us forgo the, “caramel, cinnamon, toffee, corn bread” descriptions and just say they’re yummy.

It is Saturday afternoon, day two of Bourbon and Beyond and the temperature was easing towards 90 degrees. Kentuckian Bill Monroe is universally accepted as the father and founder of bluegrass music and Del McCoury, whose pedigree includes an early stretch as a banjo and guitar player, then vocalist for Bill Monroe’s Bluegrass Boys, is one of the few living elder statesman of bluegrass.  He was about to tear into some Monroe gems and fascinating covers like Richard Thompson’s “Vincent Black Lightning,” and “Nashville Cats” by the Lovin’ Spoonful. The Del McCoury Band is international bluegrass royalty, equally respected and cherished here in the birthplace the genre.  McCoury’s sons Ronnie and Rob were with him, playing mandolin and banjo respectively. It was a family affair at what many consider to be a rock festival.  Cheers to the intuition of the festival producer for understanding the draw that bluegrass royalty might command in and around Kentucky.

Eighty year-old McCoury is still vital, still enjoys a healthy performance schedule, and his voice is as clear and strong as a diamond. Just when you think his voice has hit the sweet spot he takes it up one more octave.

It was way beyond Hot and dusty and some refreshment was called for. I checked the schedule and saw that a rocking chair discussion was about to begin nearby on Pappy Van Winkle and the Van Winkle family of bourbons. More important, half ounce tastings of the unobtainable holy grail of bourbons, Pappy Van Winkle were beginning to appear.  Look up the definition of “highly allocated” and you will see a picture of a Pappy Van Winkle bourbon bottle.  This bourbon is one of the most highly prized trophies in the alcoholic beverage world. The labels on the bottles are so beautiful that empty bottles sell for $100 on eBay. I sampled a 15 year-old batch which, if you could find it at a retail store, should sell for about $79. But if you’re curious, do a Google search. You might be lucky enough to get a bottle for $2000. The retail price for the 23-year-old version sits at about $250, but you’d be fortunate to find it for $4000 from specialty dealers.  The simple answer is not very much of it is made and when it’s gone you can’t just make more, unless you’re willing to wait 10 to 23 years. Everyone’s pallet is different, and there are Pappy snobs, but I feel like I’d sampled a few bourbons that were just as good and were closer to the $70 price point.

Angel of bluegrass music, Allison Krauss, began tuning her fiddle on stage. Krause‘s touring schedule has been extremely sparse over the last four years so fans that had already been warmed up by the McCourys were eager to hear her set.  She never fails to remark that Louisville is one of her favorite towns to play and she didn’t forget to say so this time.  Her stunning crystalline voice always surprises those who are new to her music. Forget that she’s been recording and performing since she was 14,  her voice has never wavered or aged in the slightest.

She ran through an extensive set of 18 songs that included a handful of covers and rarities, such as a duet she recorded with Robert Plant — the Little Milton cover,  “Let Your Loss Be Your Lesson.” Another performance highlight was, “Down to the River to Pray,” a song featured in the popular film, “Oh Brother Where Art Thou.”

Just before Robert Plant took the stage as Saturday night’s headliner, a question had made its way throughout the festival. What will he perform? In a career that spans 50 years, there is a lot to choose from.  As it turned out, six of the 11 songs in his set were ones that he had recorded with Led Zeppelin. The paired down versions, performed at considerably lower volume, were a nice surprise and hugely popular with festival goers. He closed night number two of Bourbon and Beyond with a single encore, Zeppelin’s, “Ramble On.”

White Reaper is a Louisville band that has grown out of their local status to become a nationally known touring act. Nonetheless, claiming a spot on a main stage at a festival this size was a real coup for these guys. Despite being one of the first bands on-stage for the day, a spot that usually suffers from a lack of bodies, there were enough local folk to inflate the audience enough to make a grand showing early Sunday afternoon.

Up to this point there had been a dearth of soul music. Then Leon Bridges appeared with a slick band and original songs, ruminations on his life and his personal experiences. His tenor voice was, at turns, smooth and velvety, or strong and deeply emotional and reflected Sam Cook, Marvin Gaye, or Smokey Robinson. That said, it was also very hard to miss the man, preening in the leopard jumpsuit, all smooth moves and slides, dancing around the large Barrel stage like a cat while delivering some energized, polished R&B.

At this point in the long hot weekend it was time to make some decisions. After minor deliberation, I determined that there was no way I could miss the band I fell in love with at age 13.  ZZ Top is one of those bands that has so many genuine top 10 hits (spanning decades) that there was little room to include album cuts in Sunday night’s set. Instead of listing all the hits that Billy, Dusty, and Frank ground out, I’ll share the highlight that catapulted me back to middle school: “Waiting’ for the Bus,” downshifting straight into, “Jesus Just Left Chicago.” the raucous blues medley from Tres Hombres, the band’s third album from 1973.  Honorable mention goes to, “Just Got Paid,” again, from the earliest part of their career.

Satisfied and now somewhat dehydrated with dust-filled lungs, I couldn’t think of a better way for this year’s Bourbon and Beyond Festival to wind down. 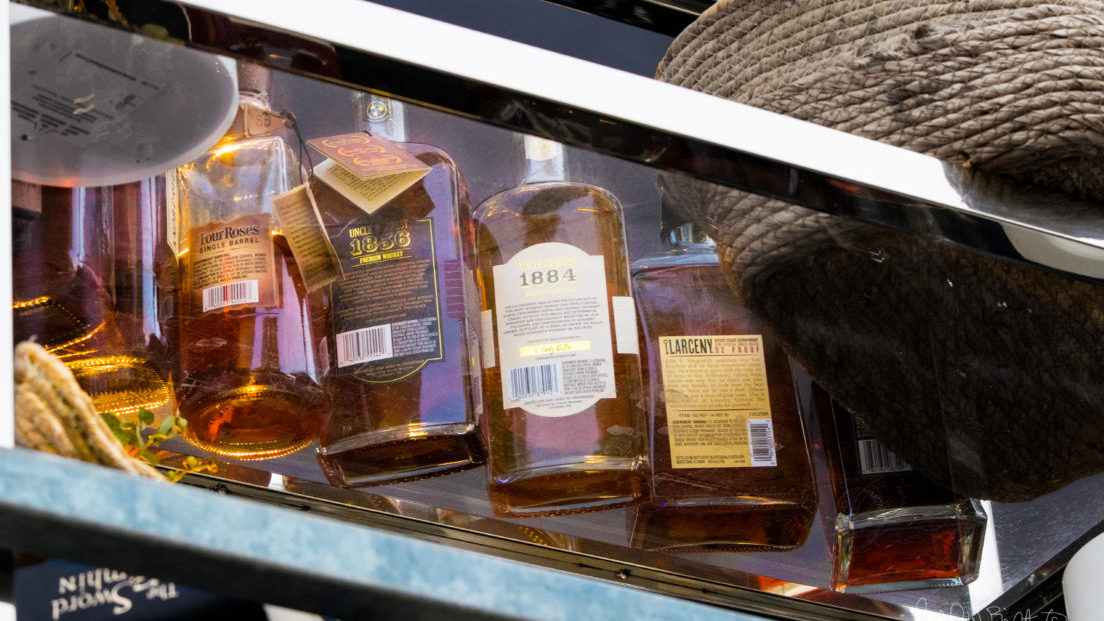