It’s refreshing to know that in 2018 an iconic horror movie franchise doesn’t have to rely on a remake, a reboot, a reimagining, or any other kind of ‘re–’ that has mostly induced frustrated moans and groans from loyal fans of the horror genre. No — we now know that you can actually go right back to the drawing board and play a nice game of ‘what if’ with an alternate timeline. Halloween is a sequel to the original, setting aside all of the other movies in the franchise, and of course the polarizing Rob Zombie remakes. This new sequel comes from an unusual place, directed by David Gordon Green (Pineapple Express), and written by Danny McBride (Eastbound and Down), this sequel was met with skepticism, but in the end, its comedic origins might surprise you.

Halloween takes place 40 years after the fateful night in Haddonfield where Michael Myers first went on his killing spree and terrorized a town, and most notably Laurie Strode (Jamie Lee Curtis). All these years later, she is an isolated recluse with an adult daughter that she’s had a fractured relationship with her entire life. Her daughter Karen (Judy Greer) and granddaughter Allyson (Andi Matichak) haven’t completely abandoned their family matriarch, but it’s clear the tragedy of that night has never stopped affecting this family. Meanwhile, Michael Myers remains incarcerated at a mental health facility. He is old, grey haired, but still a monstrously intimidating presence. When two podcasters approach Myers, his iconic mask in tow, to try to shed some light on his and Laurie’s story, that sets the events in motion that unleash terror upon the town of Haddonfield once again.

Halloween hits all of the familiar beats, even paying homage to certain iconic shots like some trick or treaters bumping into Michael, and it feels like the original. The original score is also used again in the opening scene and all throughout and provide an appropriate amount of nostalgia to put the viewer in the right mind space. It’s clear that, although these filmmakers originated in comedy, they truly have a love for this franchise that was evident throughout. 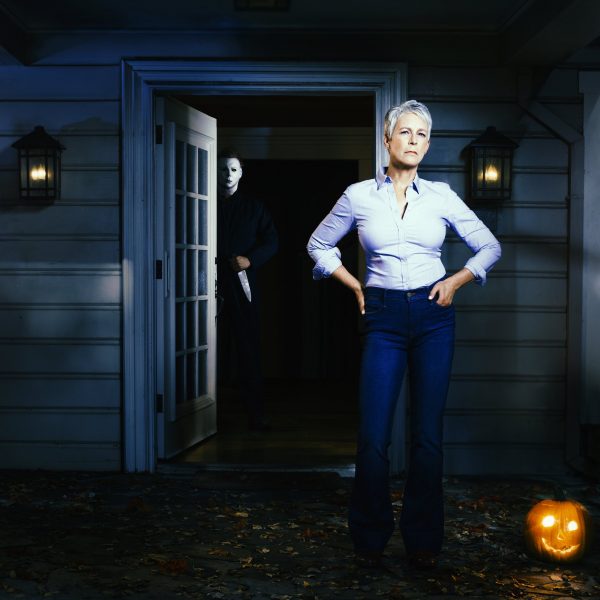 Curtis’s Laurie Strode is just as familiar as she was expected to be. She’s tough, yet vulnerable, the new addition of having a daughter and granddaughter to play off of was a challenge that Curtis nailed beautifully. Nobody knows this character better than she does, and the idea of seeing how this tragedy would affect Laurie Strode all these years later is what drew her back to this franchise. Michael Myers is classic Shape here. Even the moments before he reacquires the mask are very tense and scary and the glimpses of his withered face do a great job of humanizing this monster just enough to make you forget how deranged and unkillable he’s been all these years. He isn’t the hulking beast he was in Rob Zombie’s, but he’s still incredibly intimidating in every scene.

For some, it might feel a little too bland. David Gordon Green and company don’t take a lot of risks. You get the sense that they tried very hard not to mess this up for fear of the wrath of the rabid fans of this franchise. That isn’t hard to understand, the Rob Zombie films were extremely polarizing, and none of the risks taken in those two films were received very well. The only risks attempted here are ones of humor. (One thing that goes overlooked in what makes a good horror movie is how well it can utilize humor.) Sometimes that tension relief can be exactly what a scene needs to make for a complete experience when watching a horror film. Halloween does a great job of this and sprinkles an appropriate amount of humor throughout. That, combined with the care put into the film made for a fun viewing.

Overall, general audiences are going to eat this sequel up. It’s not 100% necessary to have seen the original, but if you haven’t… get on that! This new Halloween film hits the nostalgic meter hard, so fans of the original shouldn’t be disappointed. It would have been nice if there were more risks taken that paid off, or if there would have been a little more backstory about Karen’s childhood rather than it just being alluded to, but overall this is a worthy look at an alternate timeline to one of the most iconic horror franchises ever made.