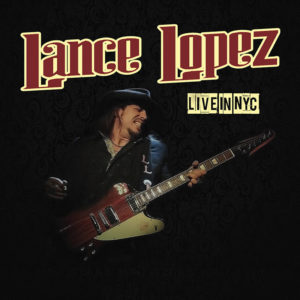 Texas has been consistently cranking out some of the best rockers, almost since the creation of the genre. Legends from Buddy Holly to ZZ Top, end even modern artists like Beyonce hail from the state. The blues rock scene, while certainly not as big as it once was, is still alive and well there, too.  Among the more recent artist on the scene is Lance Lopez and his three piece band made up of himself, Mike Nunno on bass, and Chris Redden on drums.

Although he has released something like seven albums under his own name, depending on your definition of the word, his newest is a seven song live record. titled Lance Lopez: Live in NYC. The record, a feat in itself as fewer and fewer artist venture into live recordings these days, was also recorded at the B.B. King’s Blues Club; a venue that screams old time rock & roll, for those who haven’t had the opportunity to go. There is a good reason why Lance Lopez is known as a “guitar hero”, which you can’t fully appreciate until you see, or in this case, hear, an artist live. The passion that goes into ripping a solo for a crowd of fans in unlike most anything that can be replicated in a studio setting. In Lopez’s case, i truly believe that you can hear it in the music, particularly in my album favorite, “Get Out and Walk”, an all business, guitar lead rock song that could match those of even his idols such as Johny Winter, whom the album is dedicated to.

If you like classic rock, blues, or hopefully, both, this seven piece compilation of Lopez’s most beloved work is a must have, and is loaded with a level of passion, skill, and quality that you don’t see everyday.

Matt Guevara
Matt Guevara is a music photographer based out of Massachusetts and working throughout New England. Music is his motivation and he works to share it with others through his photos. When he is not shooting, he can often be found studying photography, listening to the music he loves, and enjoying life. www.mattgphoto.net