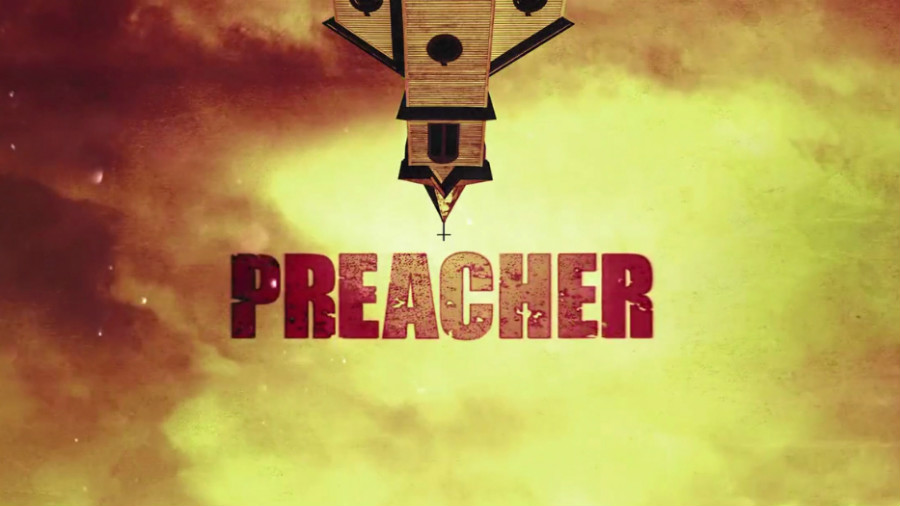 Praise the Lord, Preacher fans! Whether you are a fan of the comic book series or of AMC’s television adaptation, the show has finally gotten into its twisted grove, throwing Jessie, Tulip, Cassidy, and the other denizens of Salvation, Texas headfirst into the darkly humorous and twisted world that was initially promised.

For those who are unaware of the general premise of the comic book adaptation, the series follows Jessie Custer, a preacher with a colorful past in charge of a failing church in the town of Salvation, Texas. While some of that blame can be put on Jessie’s lack of motivation, the fact that psychopaths, pedophiles, and child beating parents are always lurking around the corner. It’s safe to say that the locals aren’t exactly interested in spiritual salvation.

However, one night when on the verge of quitting, Jessie finds himself fused with a mysterious entity that allows him to command anyone and anything with his very words. Presuming that this was God’s doing, he performs a spiritual 180, and makes attempts to clean up the cesspool that his town has become. That’s far easier said than done though, as the murderous Odin Quincannon, Jessie’s ex-girlfriend  Tulip, and two heavily armed “government” agents will do anything in their power to kill, take advantage of, or seize whatever unearthly ability the preacher received.

If you can’t already tell, Preacher definitely isn’t your average show in the slightest, and that’s what it makes it so wonderful. The first five episodes were interesting, but unfortunately due to unbelievably slow pacing and withholding far more information about characters and events than necessary, both casual viewers and fans of the comics were largely turned off. Luckily, most likely thanks to the show reaching the half way point of its season, Preacher is finally getting enough confidence to slowly kick things all the way up to eleven. 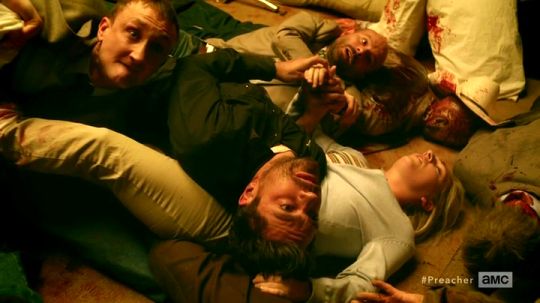 First off, holy crap, THAT is how you do a cold open for a television show! Starting with Jessie finally getting some info about what exactly Genesis, the entity possessing him, from bumbling angels DeBlanc and Fiore, the show immediately ramps up the insanity with a solid five minutes of angel versus angel combat. The two angels have become a bright spot for me in the first couple of episodes with their sheer ineptitude and social awkwardness, and to see them to (poorly) take down the rival angel was a hilarious Loony Toons-esque mess. The addition of Jessie accidentally causing the angel to regenerate right when Jessie had her pinned down cinched this moment as one of my favorite scenes this year in television behind Game of Thrones’s Battle of the Bastards.

Jessie’s refusal to give up Genesis at the end of all the carnage almost functions as a bit of a punchline to a joke, and a worrying one at that. While it looks like the town of Salvation most likely won’t have to worry about a war between heaven and hell in the near future, the Voice has only brought trouble whenever the preacher decides to use it, something even Cassidy seems to have noticed. However, Jessie might be changing his mind after he literally sends Eugene to Hell for what not appreciating what he’s done for the bullied high schooler. 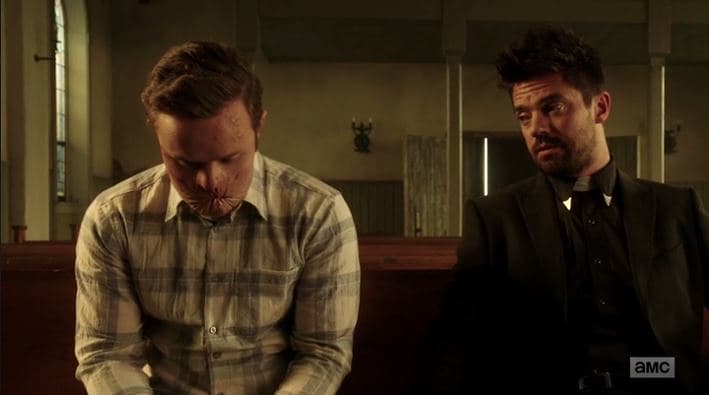 Poor, poor Eugene. No one in Preacher is totally free from sin, but considering Eugene was hands down the nicest and most innocent of the lot, it would only make sense the poor kid would be punished in some way. However, being sent to the deepest bowels the inferno is a little too cruel, especially for a kid who recently just tasted friendship and camaraderie from his classmates for the first time in quite a while. Here’s hoping that ol Satan takes it easy on the guy!

Jessie doesn’t seem to be the only person sick of all the shit in Salvation either, as Tulip finally decides to make up with Emily after she rudely barged in on her while the latter was on the toilet last episode. Sure, it started with Tulip breaking into Emily’s house and breaking her kid’s art project, but it is kinda nice to see the two getting along to a degree. The show has been kinda struggling with what to do with the two women besides housing mighty large crushes on Jessie (not that I blame them), but their scene together shows that there is still something else to these characters that we have yet to see. All in all, this episode provided everything I wanted from Preacher and more, and will definitely go down as one of my favorite episodes of the year. 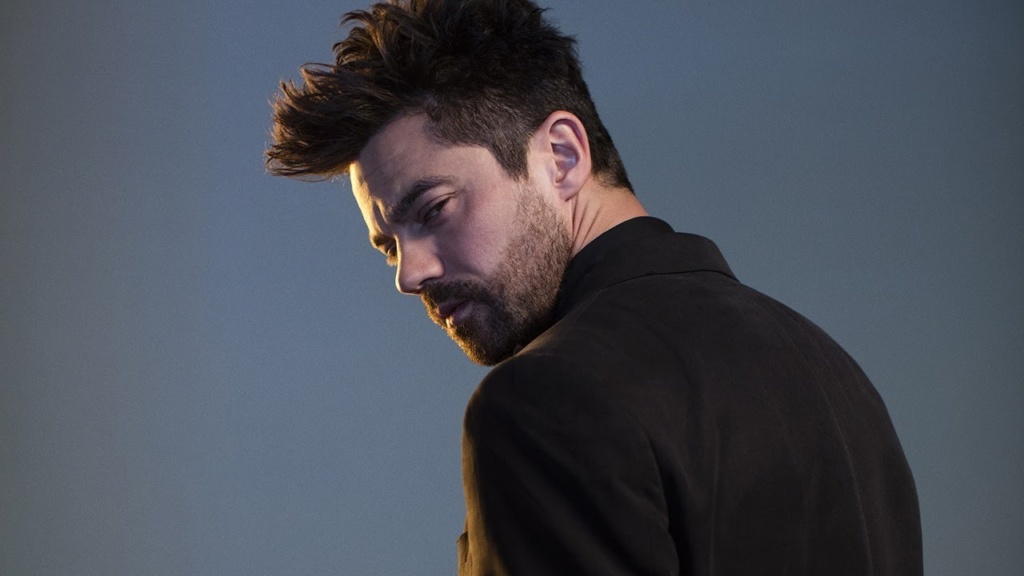 While I personally enjoyed the balls to the wall craziness and revelations of the last episode, it is always nice to have a good breather to look back at all that has happened. After all, when your main character straight up sends someone to hell, that’s not exactly a thing to be treated lightly, but thankfully Preacher doesn’t skip a beat, getting nearly everyone to call Jessie out on his shit. 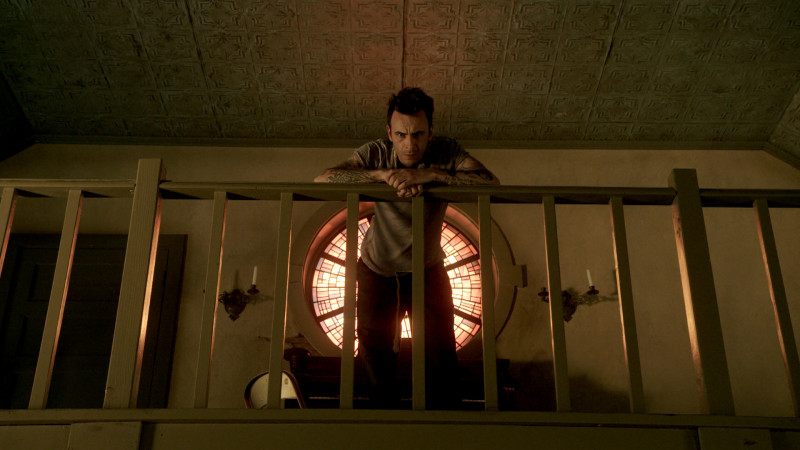 Eugene’s disappearance has already reverberated throughout the town, with his empty seat at the Sunday service being especially chilling. Cassidy, the only other person who saw what Jessie did, is the first one up, pointing out how uncomfortably calm and normal the preacher seems. While it seems kind of strange and out of character for a rude stimulant abusing vampire such as himself to be taking the high ground, it works in a way because he is absolutely right. However, Jessie coldly refuses any responsibility in the act, leaving Cassidy burning alive in the sunlight, which is quite the dick move, even by the preacher’s standards. 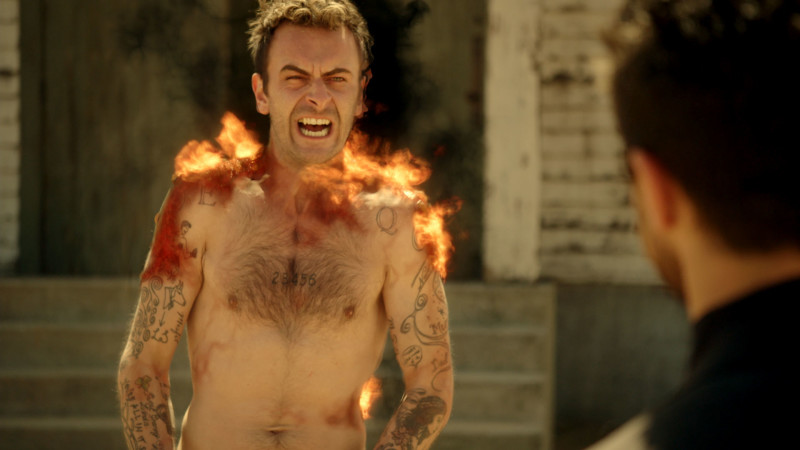 Well, he IS Irish after all…

I will have to admit that I’m not a huge fan of Eugene’s origin in the show. It seems that the  whole point of the character is that he is hopelessly optimistic and won’t compromise on his morals, so to have him be an attempted murder that shot a girl merely for turning him down completely defeats his purpose. Also, the fact that he isn’t in prison now for performing said deed is baffling to say the least. Here’s hoping that Jessie is merely bluffing so he doesn’t completely look like the bad guy. 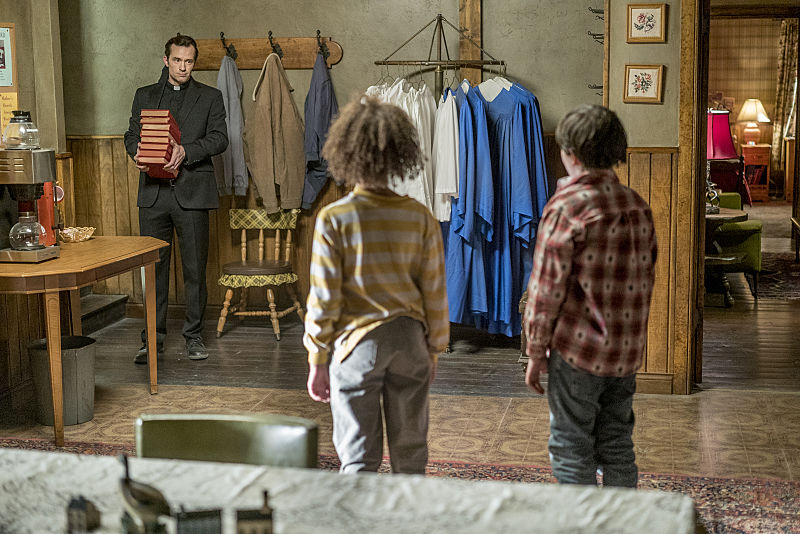 Tulip and Emily, although not knowing exactly what has Jessie in such a strange mood, begin to note that the preacher definitely has something to do with Eugene’s absence. Throughout perhaps one of the most awkward dinners ever, Tulip tries to probe Jessie for information, albeit this time, as we find out from the flashback to the two’s childhoods, from the perspective of a concerned friend. While not quite leaving her out to die like Cassidy, Jessie savagely rips into her after her lack of knowledge in regards to vanilla flammability (to be fair, neither I or my friends had any idea either). Emily has begun seeing through the preacher’s lies as well, ratting Jessie out when he tries to deceive the sheriff about Eugene’s last known location.

With all of his “friends” ganging up on him, as well as feeling guilty about banishing Eugene, things couldn’t really get worse for Jessie at the moment. Cue some poetic justice by Odin Quincannon. The murderous owner of the local meat processor plant was absent during the last episode, but is now back with a vengeance. Jessie’s Genesis powered command to serve God seems to have failed, as Odin has already killed four people and is now going after the preacher’s land. While Quincannon is as far from good as you can get, man oh man was it great to see the tables turned on Jessie, as well as bringing up interesting questions about Genesis’s power.

We know from the guy in the first episode that the commands are quite literal, but does it only last for so long? Is Quincannon just so evil that it doesn’t affect him (a bit of a cop out, but not too hard to believe), or is he indeed still following orders, albeit in his own twisted way? Regardless of the outcome, it was time for some karma retribution from someone with the same exact sense of righteousness to come in and knock Jessie off his high horse, and judging from his breakdown at the end of the episode, boy did it! However, unlike the preacher, Odin is still under his delusion, as well as hosting an armed group of cronies marching on the church, so Jessie better get himself back in check for next week, or things won’t end well…

One thought on “PREACHER EPISODES 6 & 7 REVIEW”