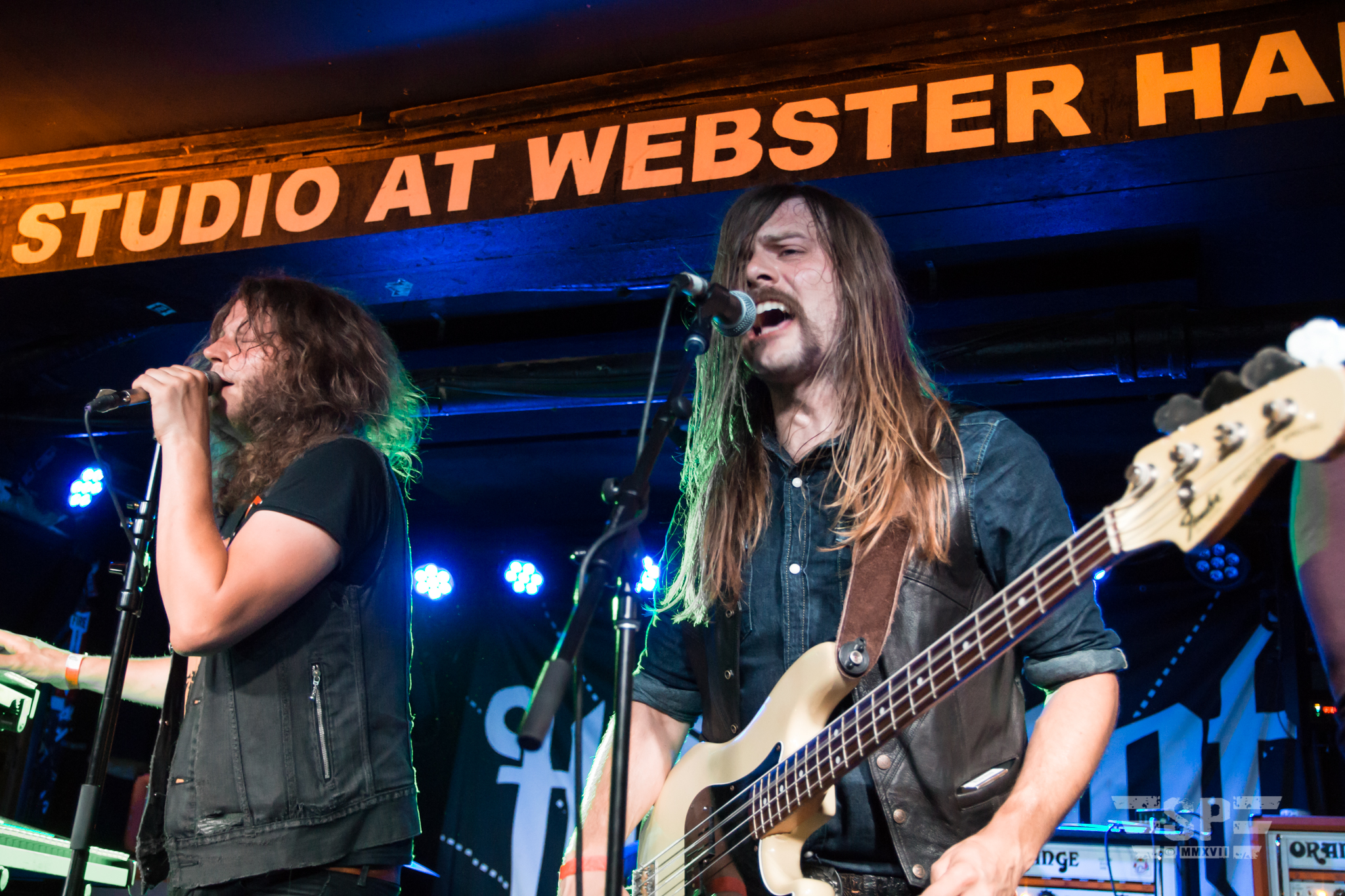 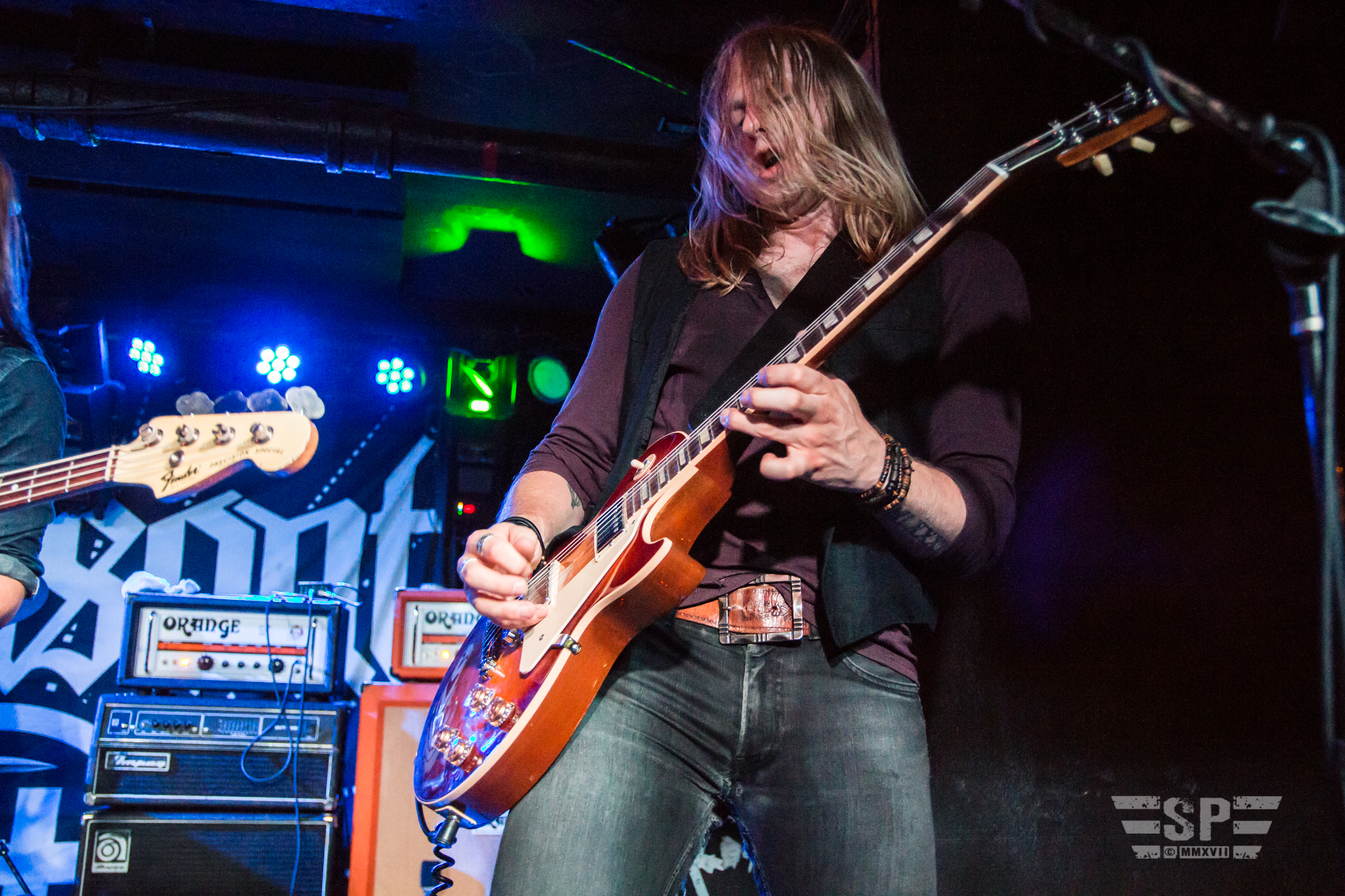 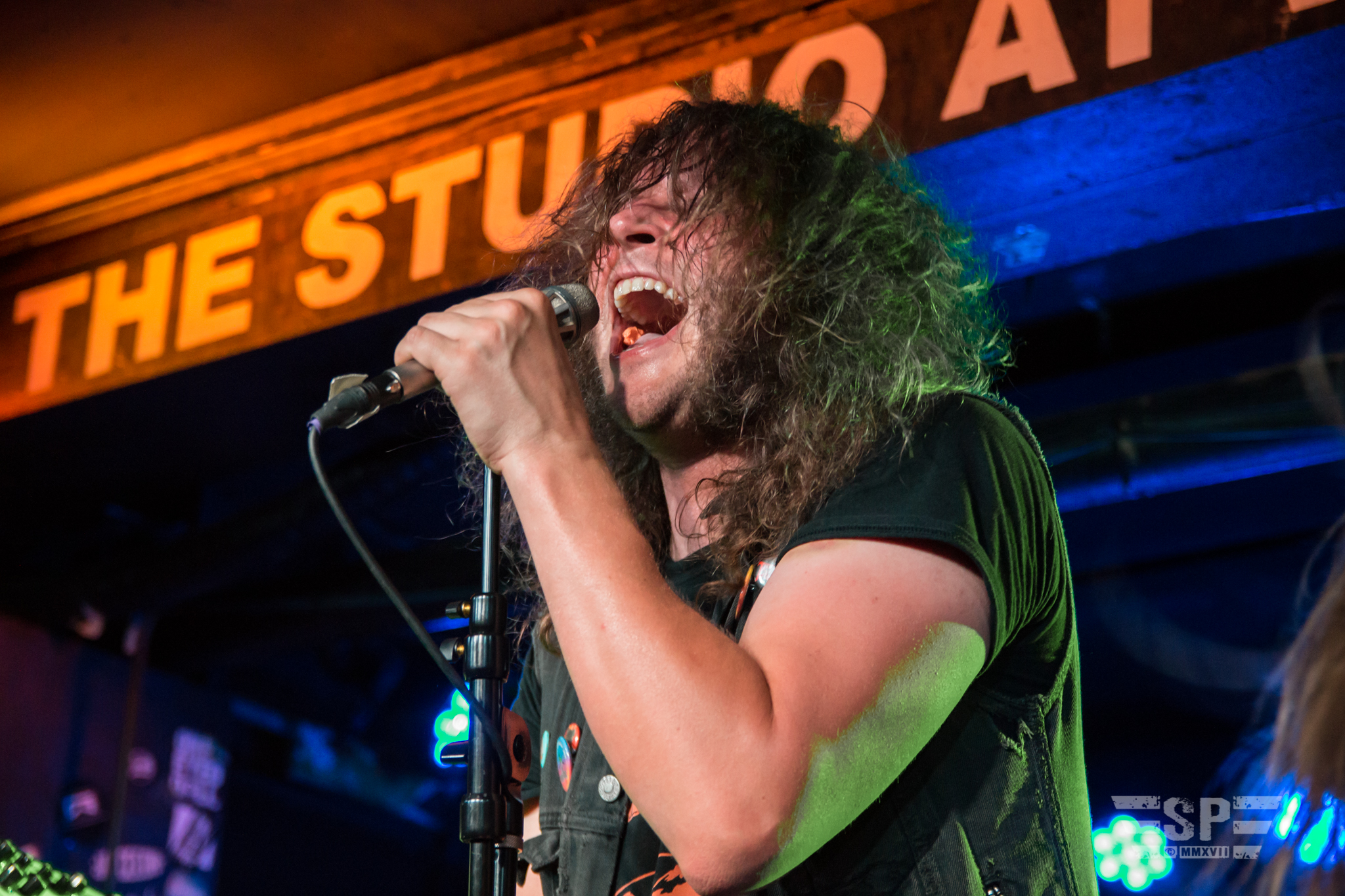 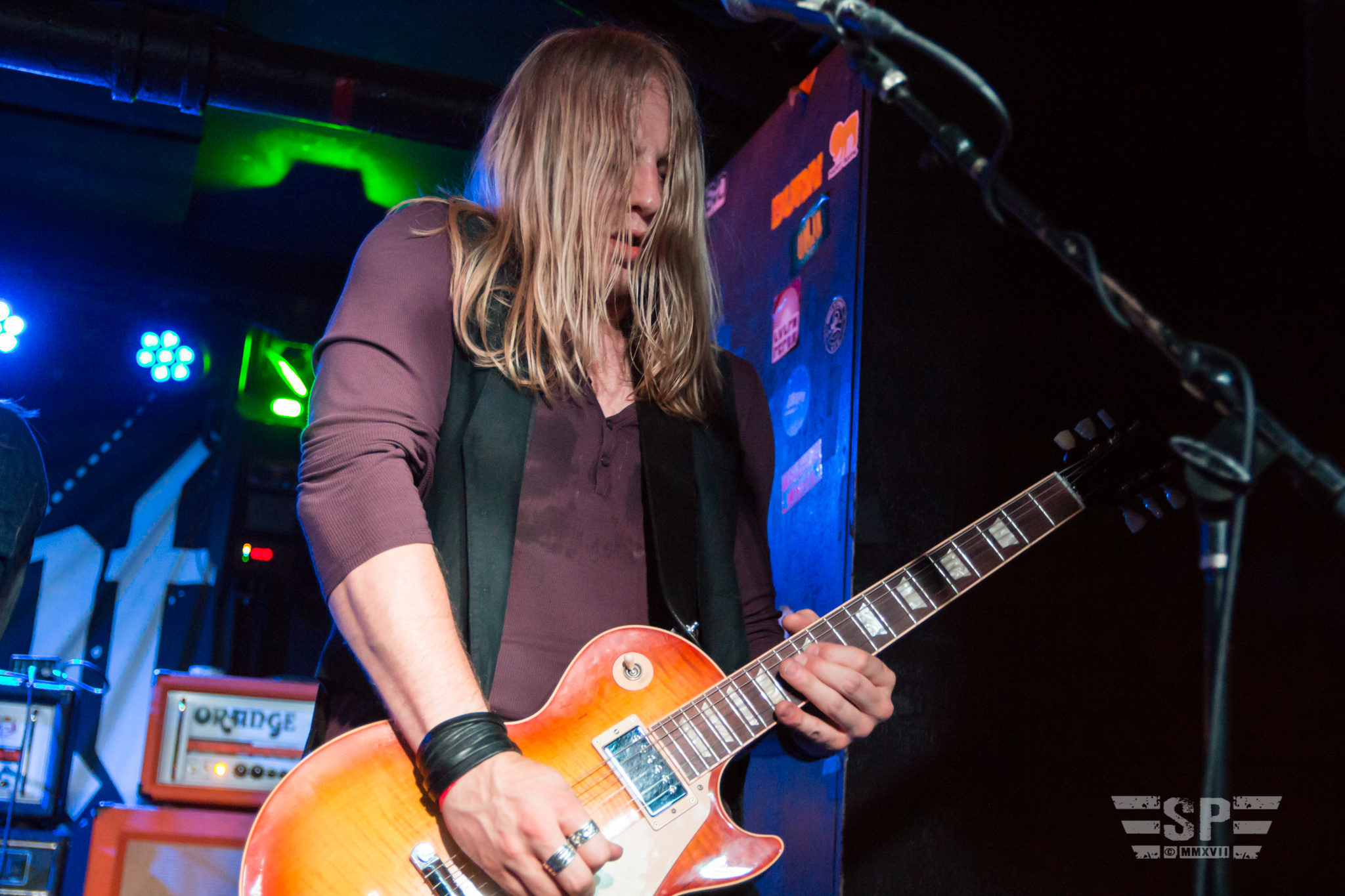 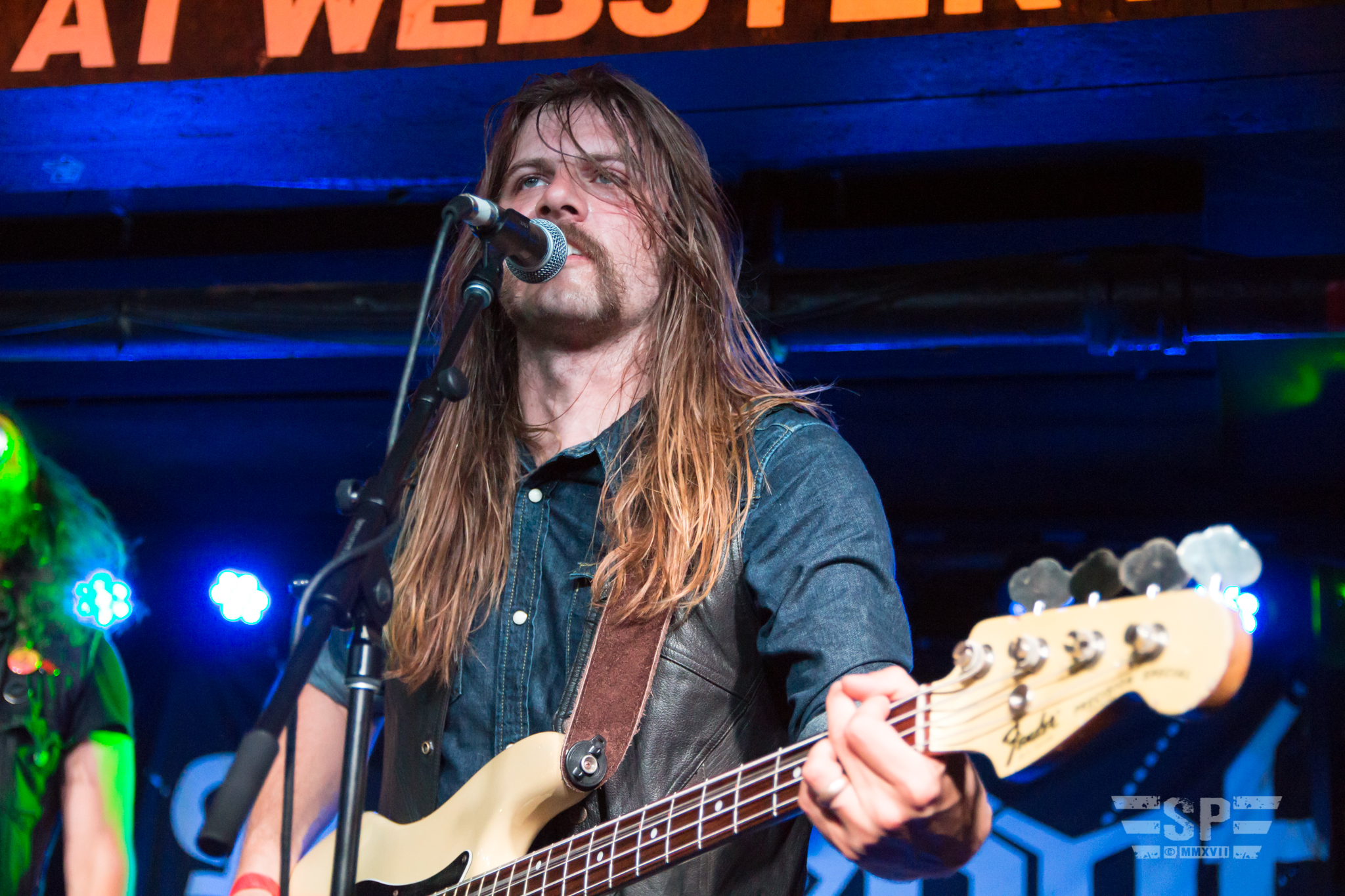 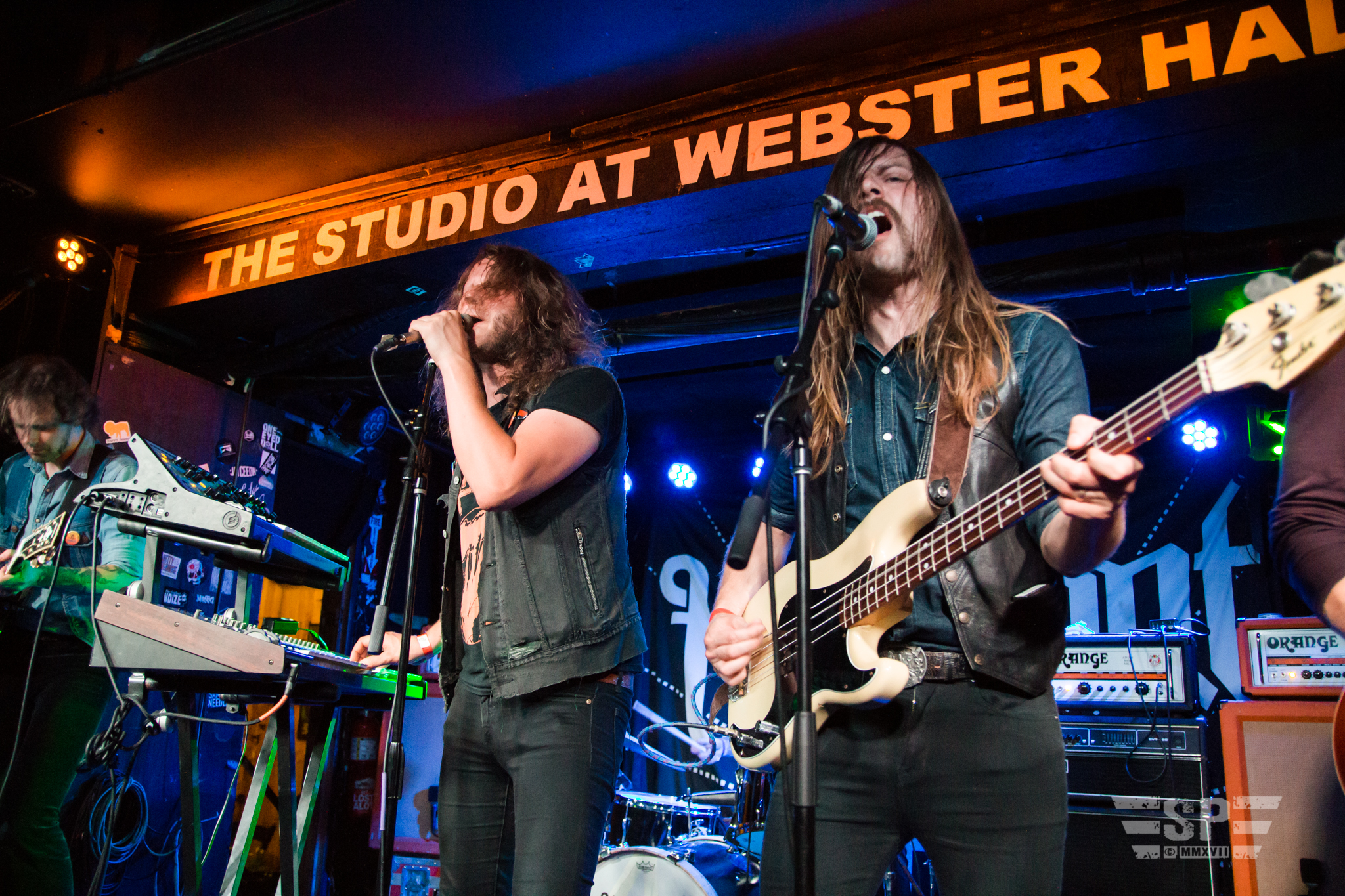 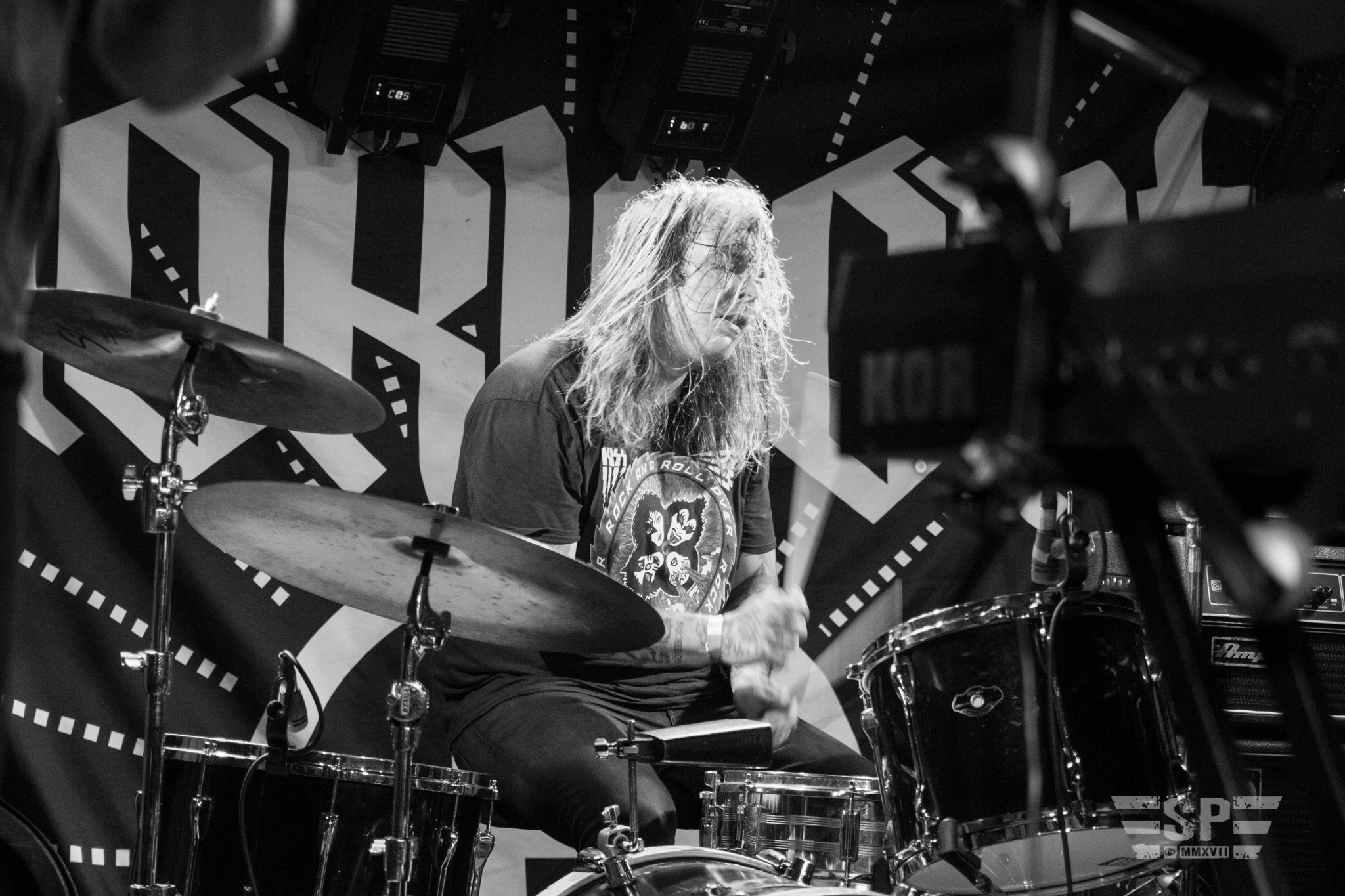 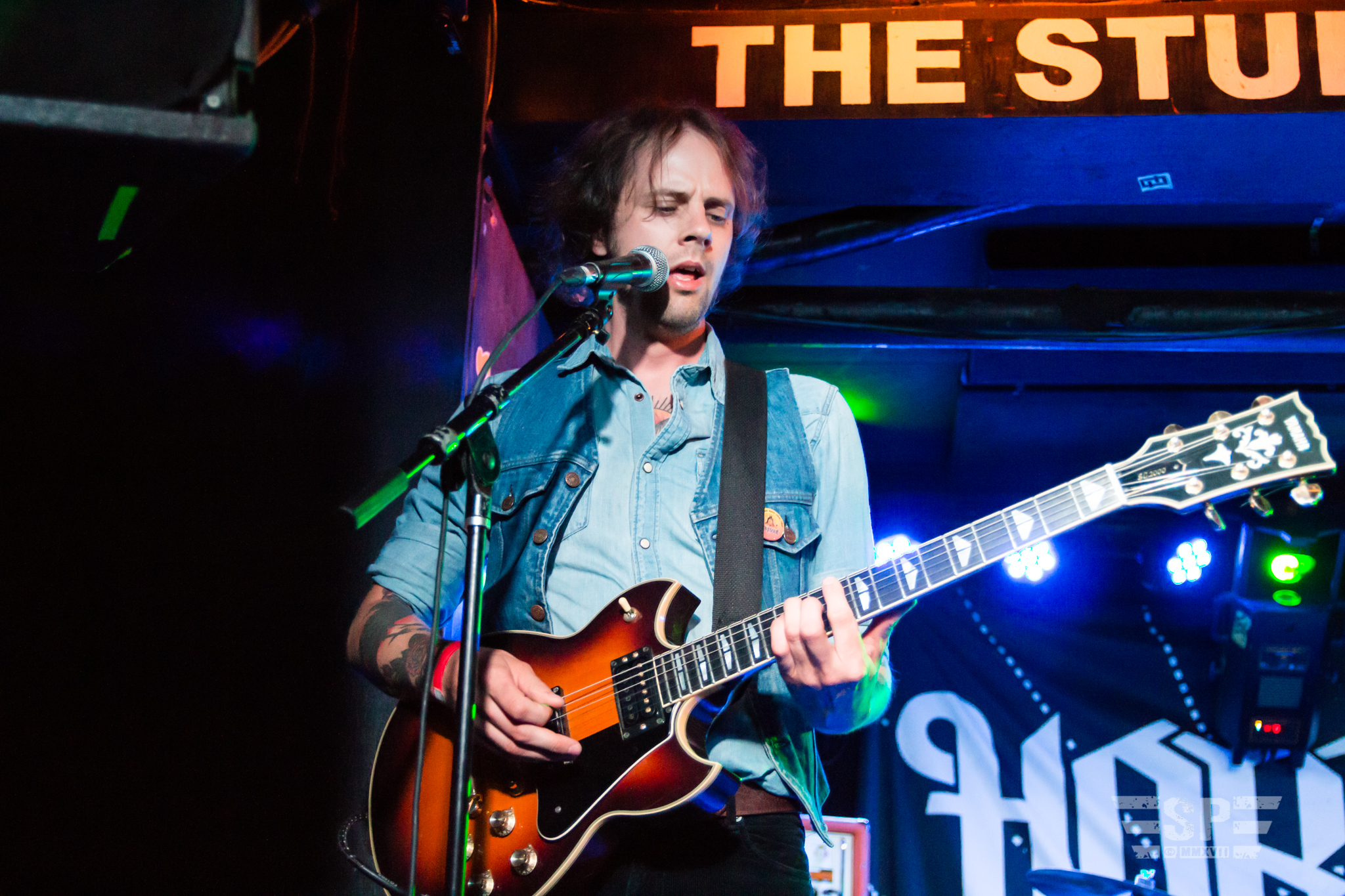 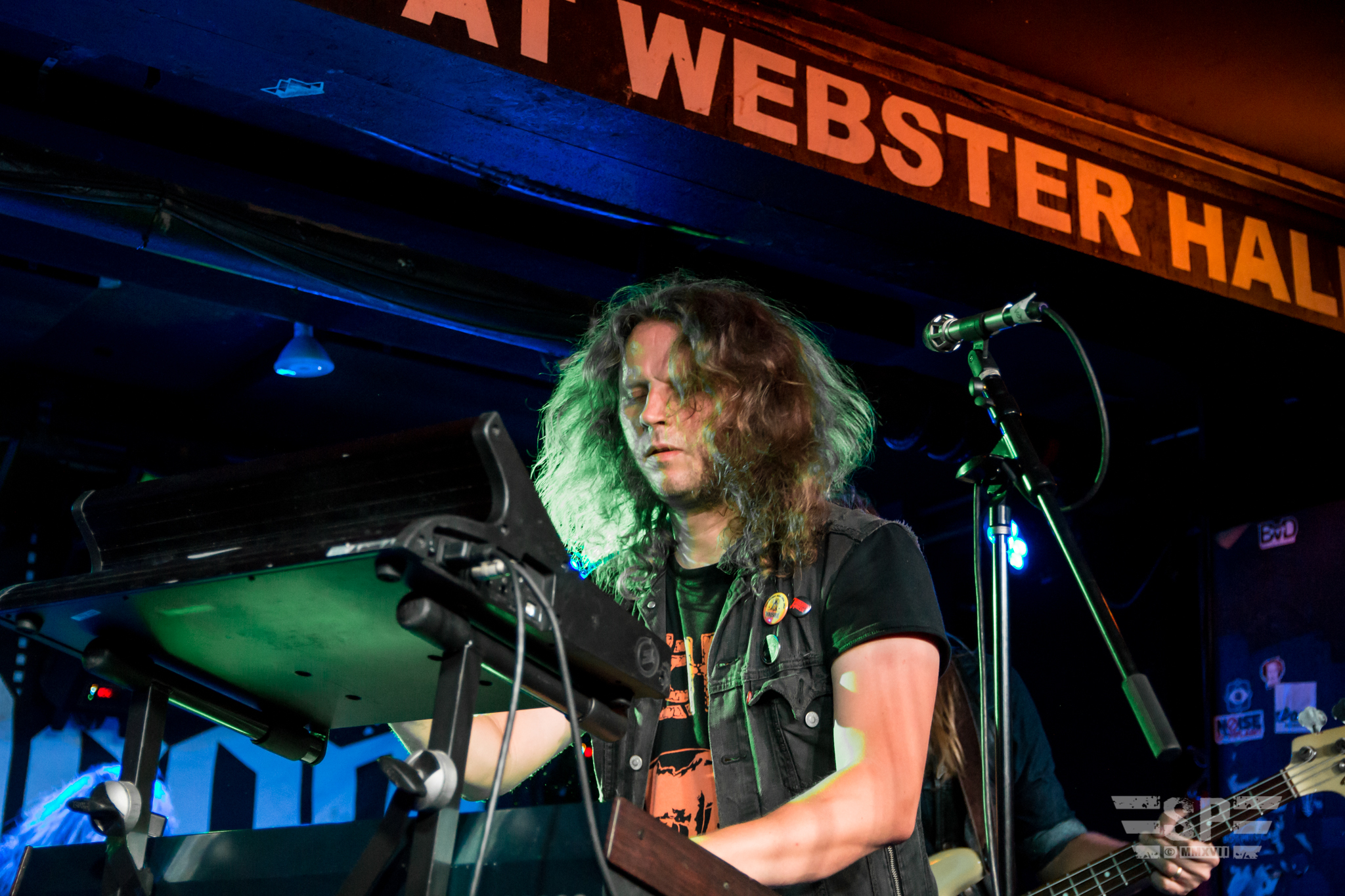 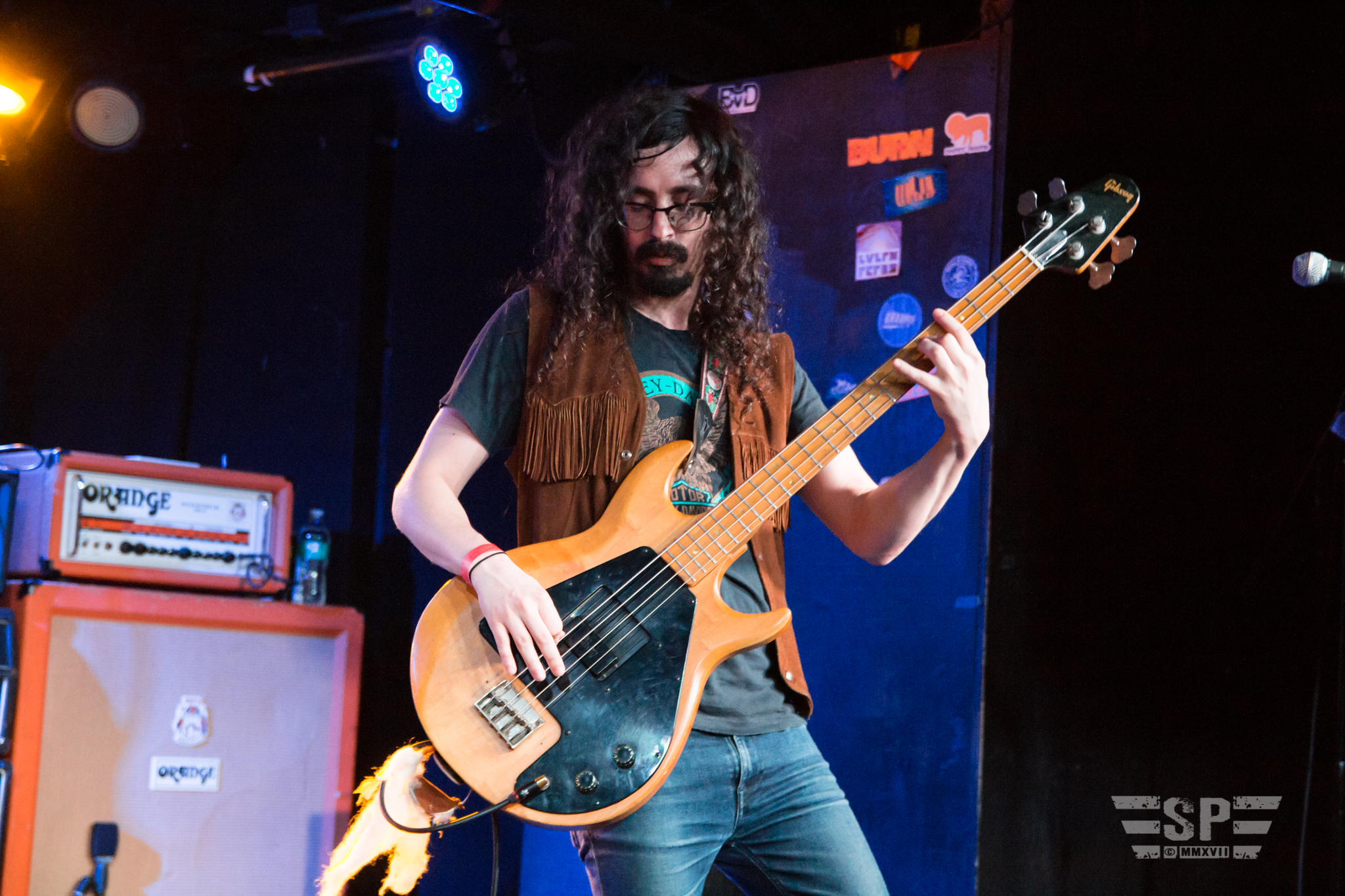 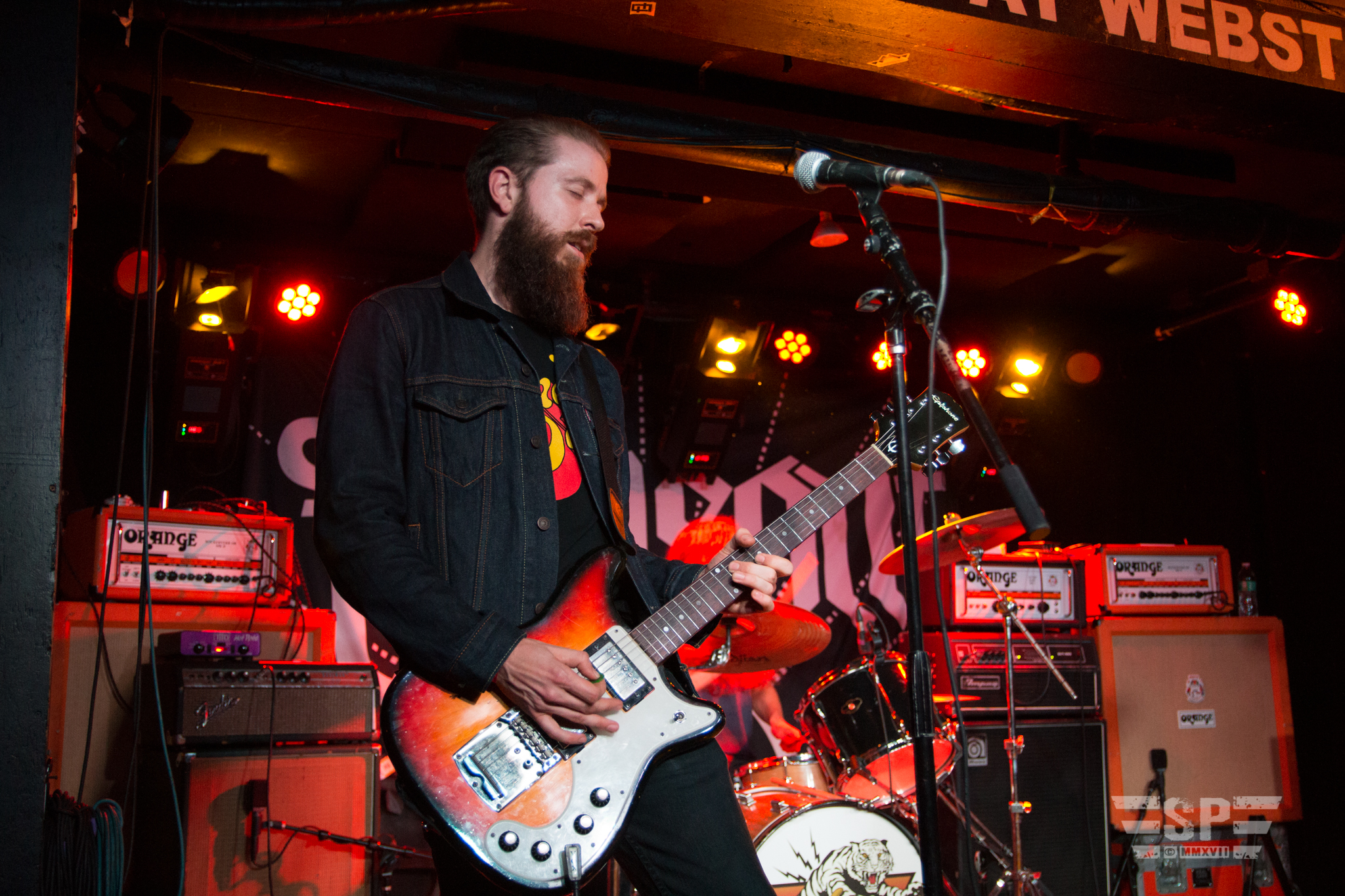 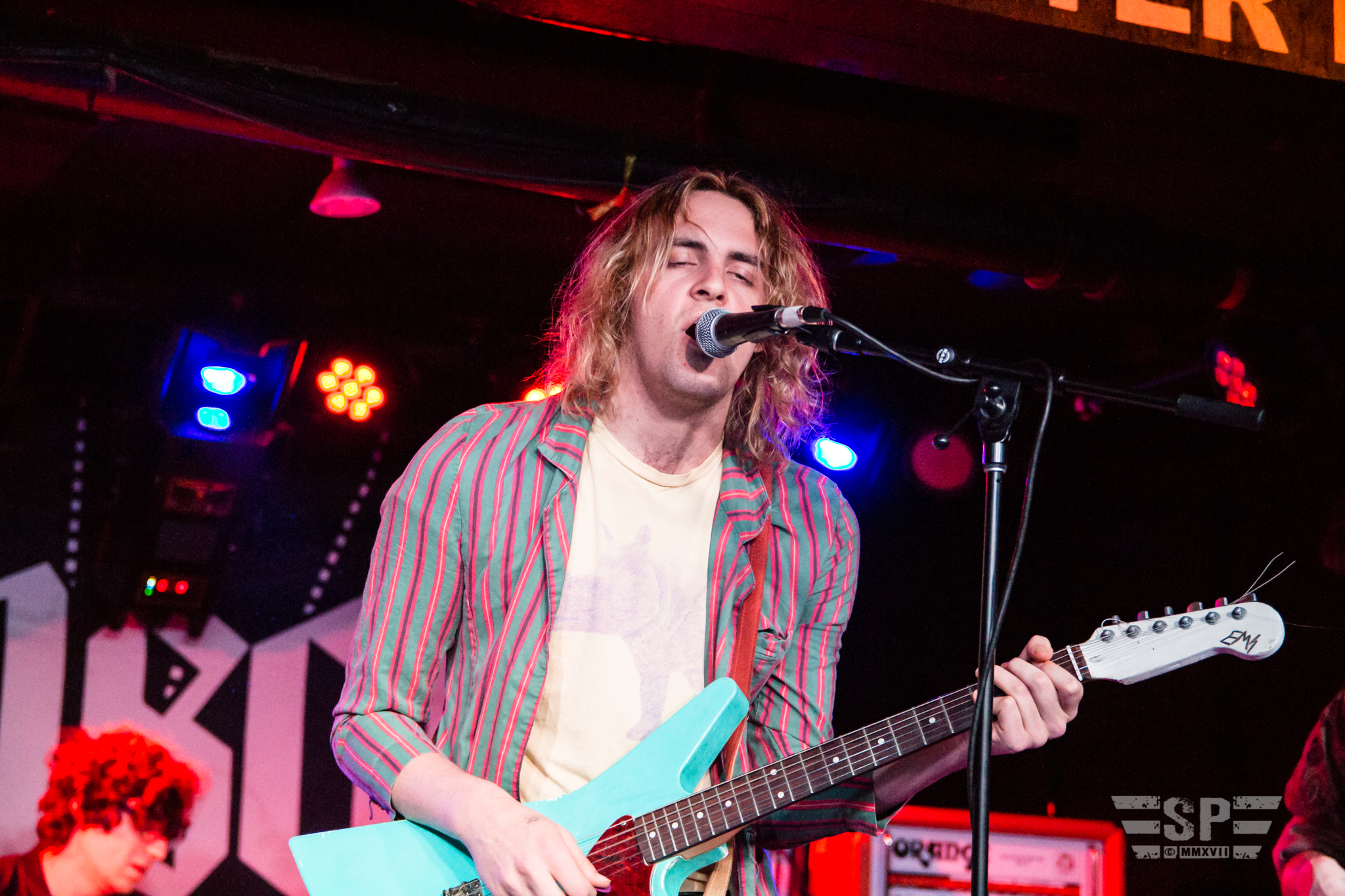 Article and photos by Steven Principato

Hidden deep beneath the grand stage of Webster Hall lies the atmospheric Marlin room, and below THAT we find the hidden speakeasy-like lair named the “studio”, which is obviously where the real music happens. This subterranean den of rock & roll decadence, despite the obscure nature, might very well be one of NYC’s best suited venues for music, especially under the control of tonight’s fantastic line-up.

Opening the show before an ever growing audience was Venice Beach’s/NYC’s The Living Strange. Taking the stage with the presence and intensity of any follow-up acts on tonight’s bill, not to mention the adept instrumentation skills of every member, all this and more from four kids hardly old enough for admission into the venue. You may now refrain from your claims of lack of musical awareness in youth’s today. The Living Strange just invalidated your argument.

Taking on a most challenging task of following a powerful opener in this case, The Dirty Streets– a rather powerful trio from a city rich in musical traditions, didn’t appear to have any issues in upholding the significant musical burden that one might face when your home is Memphis, TN. Maintaining truth in their name regarding the level of cleanliness of their home turf, The Dirty Streets also managed to deliver a genuine grade set of aggressive blues numbers as one might expect, effortlessly igniting the room in preparation for the headliner.

Far from home and further from their time of origin, Horisont marched upon a stage that appeared too small to contain their massive late 70’s arena-rock presence. Originating from the magical kingdom of Sweden, a land renowned for producing some of history’s most memorable musical acts; adored or despised, Sweden is the world’s unofficial home of infectious music spanning all genres. In present, Sweden continues this tradition in musical innovation, boasting a long list of contemporary rock bands with uniquely clever retro themes and genuine deep-down respect for their musical forefathers.

Taking on a role as time travelers more so than rock stars, a theme that’s curiously recurring in their catalog, most notably in their latest release,  About Time (Century Media Records, 2017) Horisont appears to find inspiration in a bygone golden age of fast cars, fast women, long guitar solos, and massive mountains of cocaine. Despite the fact this 5 piece pentagram of power could hardly move upon the cramped stage, their set list; faithfully recreated in this scaled-down live setting far exceeded the intensity of the studio version. With a sound respectfully channeling rock’s greatest heroes by the likes of Thin Lizzy, Rainbow, UFO, and Blue Oyster Cult, from their harmonized guitar licks down to the vintage analog synth runs brought to you by lead vocalist Axel, Horisont took that massive arena sound and efficiently compacted it to fit this intimate rock star free zone that was Webster Hall’s subterranean venue. Re-educating our youth in the lessons of rock in both English and their native tongue, these full body denim-clad rock heroes of the working man blasted the audience with rocket fueled versions of tracks spanning their entire 5 record catalog, with emphasis on their latest record featuring “Electrical,” a beat heavy Thin Lizzy inspired track to the more solemn paced, lighter-raising title track, “About Time”. Wrapping up the set with an impressive rendition of UFO’s Schenker powered guitar scorcher, “Rock Bottom,” complete with standard five minute drum solo, Horisont faithfully transported the gleeful audience of these cramped subterranean confines to a golden age of rock aboard their fantastic time machine, at least for this Monday night.

Be sure to check out Horisont and The Dirty Streets, currently on tour in a city near you… or maybe just tailgate in the parking lot.