You are here
Home > FEATURED > Movie Review: Guardians of the Galaxy Vol. 2

I can imagine that the first question any reader would have concerning this movie is, does it do the first film justice? Or more importantly: Is it just as good? Where the first Guardians of the Galaxy was a smooth introduction to a wacky group of heroes, Vol. 2 seems more like an LSD-fuelled dream sequence that will leave audiences either amazed by the spectacle, or very confused.

Directed once again by James Gunn, the sequel takes the guardians on a different adventure, as they discover the true meaning behind Peter Quill/Star Lord’s (Chris Pratt) mysterious parentage. 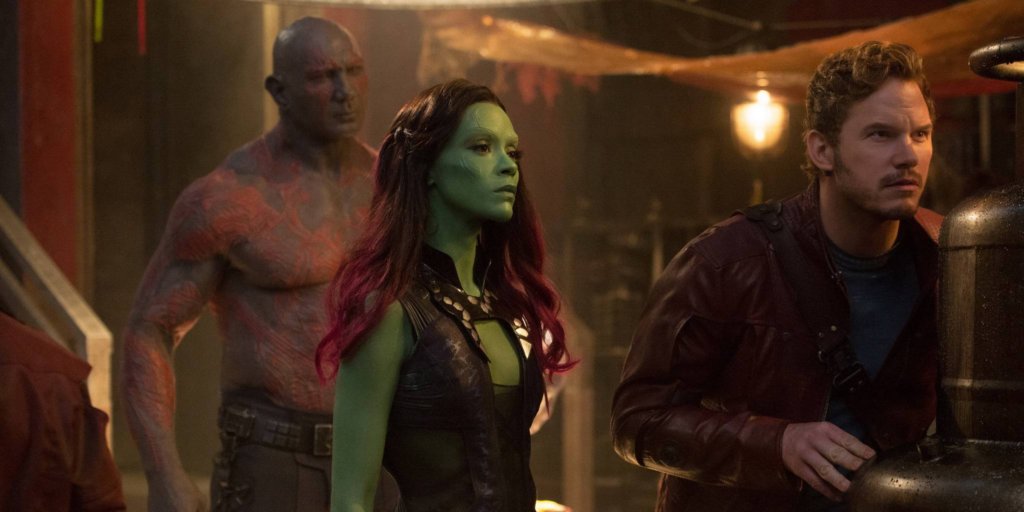 While this story might seem pretty simple in nature, let me dissuade your worry, it is anything but. Every scene introduces something new, whether it’s crazy graphics, a heart-felt story, or dramatic action, the 137-minute runtime rarely has a dull moment. However, that’s not always such a good thing, as the audience never having a breather also means that they’re never really given a chance to take in what they’re seeing or understand what’s occurring on screen.

I already mentioned this, but the visuals in this film are an element of pure marvel. While the first film showcased its space-centric background in an ample and competent manner, this time it’s on steroids. Taking some notes from Doctor Strange, the spectrum of color and light is so intense that it truly becomes otherworldly. Going from a beautiful forest setting, to an intricate space ship battle, to rainbow filled explosions, it’s a feast for the eyes and worth seeing, if for nothing else.

On top of that, the acting is once again a standout. 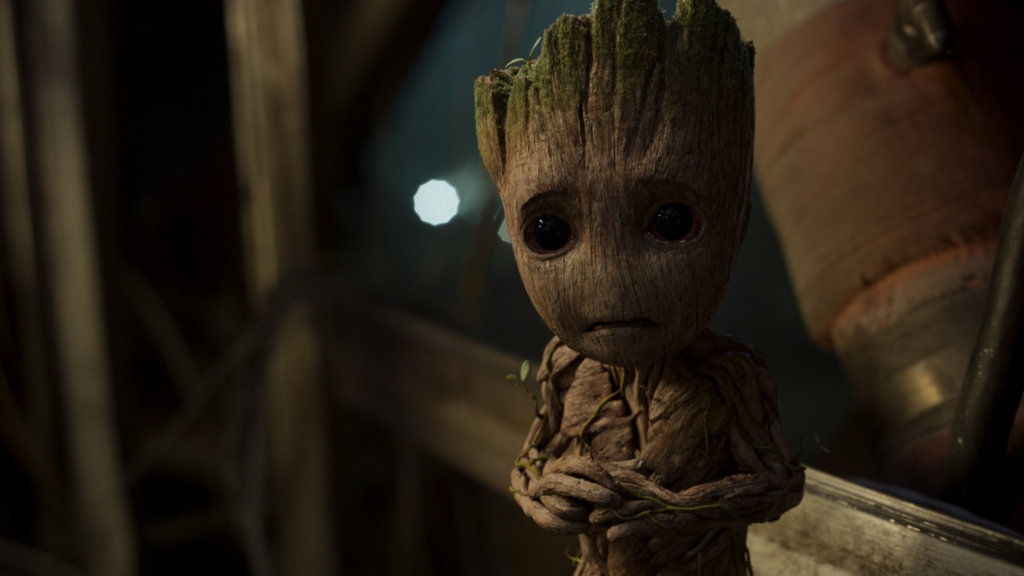 Pratt is as great as ever, effortlessly manoeuvring the thin line between emotional and powerful at a moments notice, not to mention his strong handle on the comedy littered throughout.

However, Dave Bautista and Vin Diesel anchor the humour, as they use their character quirks to break any tension and ease the audience into whatever crazy action is occurring. Bautista’s Drax throws all caution to the wind as he becomes more abrasive and truthful in his conversation, giving a nice touch of carelessness to a previously stoic character. Diesel’s Groot, on the other hand, is the epitome of cuteness. As seen by the trailers, Groot’s role this time is not to be the heart of the story, nor the head, he is simply there to provide a touch of adorableness and a belly full of laughs whenever his character get’s into varied shenanigans, and he definitely delivers on that.

In a new vein, Zoe Saldana’s Gamora and Karen Gillan’s Nebula become a strange double act. When they’re on screen together there is a chemistry that can’t be denied, as their sisterly bond is explored in a more substantial way. Their personal strength is emphasised in a way that will make them more captivating in future instalments.

In addition, Kurt Russell gets an explosive introduction as Ego the Living Planet, otherwise known as Peter’s dad. A surprising character to say the least, Russell’s everyman persona lends itself well to his almighty identity as he teases the complicated path that he has set up for him and his son. 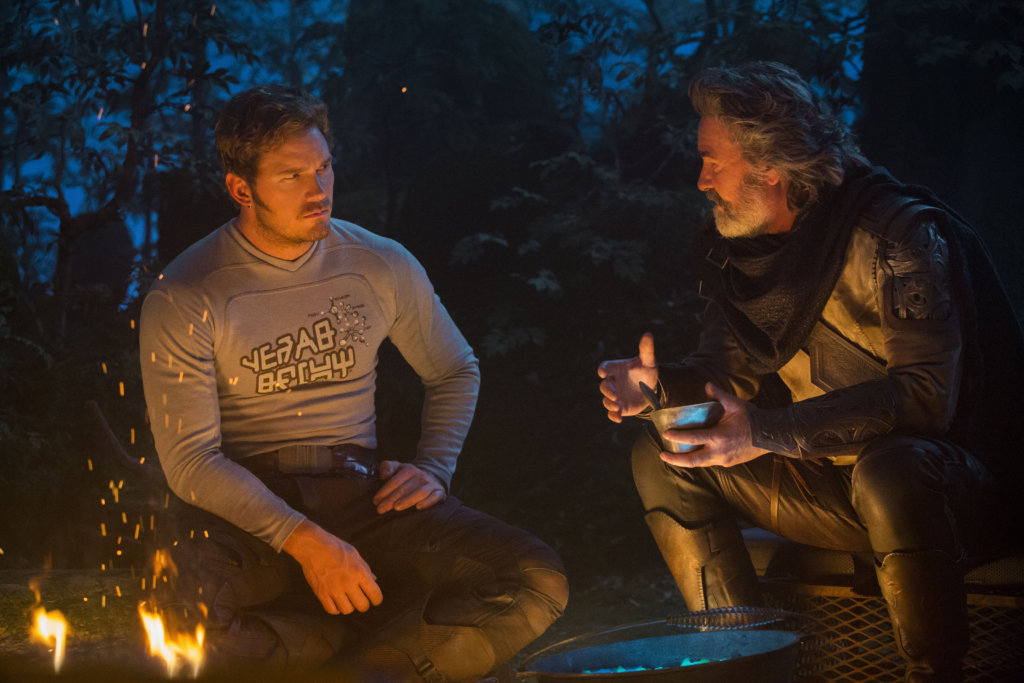 The two most noteworthy performances, however, have to go to Michael Rooker’s Yondu and Bradley Cooper’s Rocket Racoon. Both being relatively one-note characters in the previous iteration, their roles are given surprisingly powerful depth, allowing them to deliver moments that are both heartbreaking and epic, evolving into more fleshed out and spectacular characters for the audience to fall in love with.

Finally, the music and score must be mentioned. Helmed by Tyler Bates (Guardians of the Galaxy), the ever-present theme is expertly sprinkled throughout the film, adding a signatory note to the end of each scene. The battle scenes are made more exciting by it’s fantastic score and the beats in between are enhanced by a proficient soundtrack, full of 80’s classics that invite the audience into a cloud of pure nostalgia.

What is lacking, however, is a story, a plot per se. While a lot is happening every minute, to the point where it gets comical how much your eyes dart from one side of the screen to the other, it’s exhausting to the point of a migraine. The best way it can be described is that it feels like a dream. When you’re in it, everything seems to make sense and mesh well together, but after you wake up, there’s doubt surrounding its logic and cohesiveness. Some may appreciate this outrageous ride, loving it’s fun times and action-packed sequences, while others will walk out frustrated, missing the classical narrative structure that has been a marker of the MCU until now. 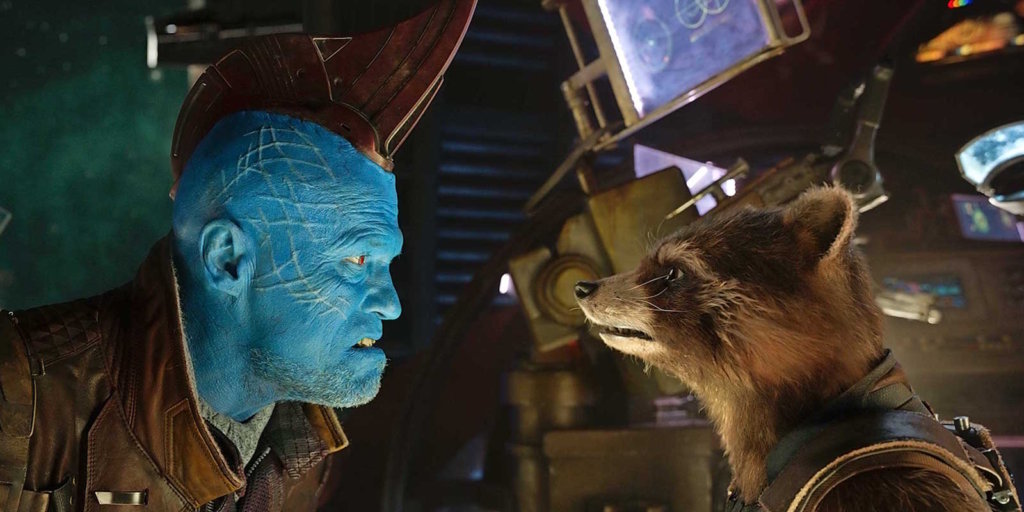 Guardians of the Galaxy Vol. 2 is crazy, and perhaps the most potentially divisive MCU film produced to date. There will be those who hate it and there will be those who love it, so the best way to go in to it is to throw away any expectations, not just of Marvel, but of film itself. If you’re very attached to a classical narrative that follows a perfected formula I’d suggest staying away and popping in an old favourite, however, if you go in looking for a good time, I guarantee a galactic adventure you won’t forget.

P.S. There’s 5 after credit scenes, so make sure you stay put!